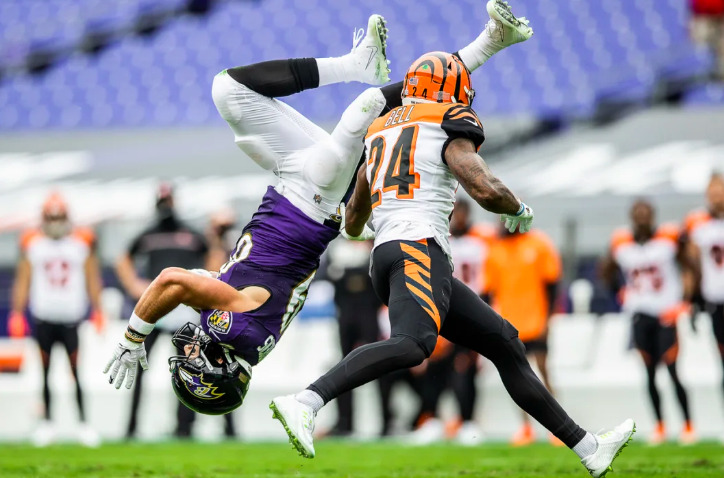 The Ravens have been stopping themselves.

That’s been a common refrain among the players following several inconsistent performances this season.

Nonetheless, the Ravens are 5-1 as they reach their bye week and have an opportunity to separate themselves from much of the AFC with a hard-nosed schedule in November.

The Ravens’ biggest challenge is living up to last year’s performance, when they broke the NFL’s single-season rushing record and led the league in scoring. A common criticism is that the offense this year isn’t clicking like it was last year, but coach John Harbaugh contends the team is not backing down from those lofty standards.

“We use the same standard; it’s where we want to be,” Harbaugh said. “We want to improve on where we’ve been in the past. Sure, we’re not where we want to be. I don’t think we were necessarily where we wanted to be last year at this time, either. It definitely is a work in progress, but we know we have a lot of work to do.

“We have to improve. Our guys are all about it. The thing I told the guys today [is] the effort level is A-plus. I really have to give our effort level a grade of perfection; we are working as hard as you can work in practice and in games.

The Ravens running attack has been dominant again — at least that’s what the numbers show. They are ranked third in the NFL with 164.3 yards per game. The team has been sharing the workload between quarterback Lamar Jackson, and running backs Mark Ingram, Gus Edwards and J.K. Dobbins, so there have not been many gaudy numbers.

The passing attack is more troublesome. The Ravens are averaging 177.8 yards passing per game, which ranks 31st, just ahead of the winless Jets (171.3).

Overall, Jackson has thrown for 1,135 yards with 10 touchdowns and two interceptions over six games. However, he has completed just 56.6% of his passes over the past four games.

Questions are being raised about his mechanics and whether he is regressing — a notion dismissed by the coaches.

“We have a very high standard, and we work very hard to chase that standard,” quarterbacks coach James Urban said. “So, it’s a constant work in progress. As always, we’re trying to chase that consistency – that level of consistency. We’ve seen great stretches of it, and there’s been some throws we’d like to have back, or some routes maybe we’d like to have back, but we’re working very hard on that. And these next couple of days, we’re going to spend some time getting some of those things cleaned up.”

The Ravens defense had some struggles giving up some big plays against Kansas City and Philadelphia but has mostly been solid. Don Martindale’s crew are ranked first among all 32 teams in scoring, allowing 17.3 points per game.

Harbaugh admits the team is a work in progress. Perhaps, there are some lingering effects from no preseason games. Nonetheless, the Ravens are in a position to win a third straight AFC North crown with two games against the Steelers in the month of November.

The downtime this week will give the players and coaches some additional time to fix some of their issues. The players are committed to hanging around the facility to put in the work.

After back-to-back losses to the Chiefs and Browns last season, the Ravens went on an astounding 14-game winning streak. Perhaps this year’s team is capable of a similar run.

“Our guys are playing super hard. Now, within that and around that, let’s build our execution up in every way,” Harbaugh said. “Communication is a big part of that, of course, technique and just doing things the right way. So, we’re going to keep working on that and that’s how you do it. It’s a long season in this league, and it’s really … How you do it over the long haul is what really counts.