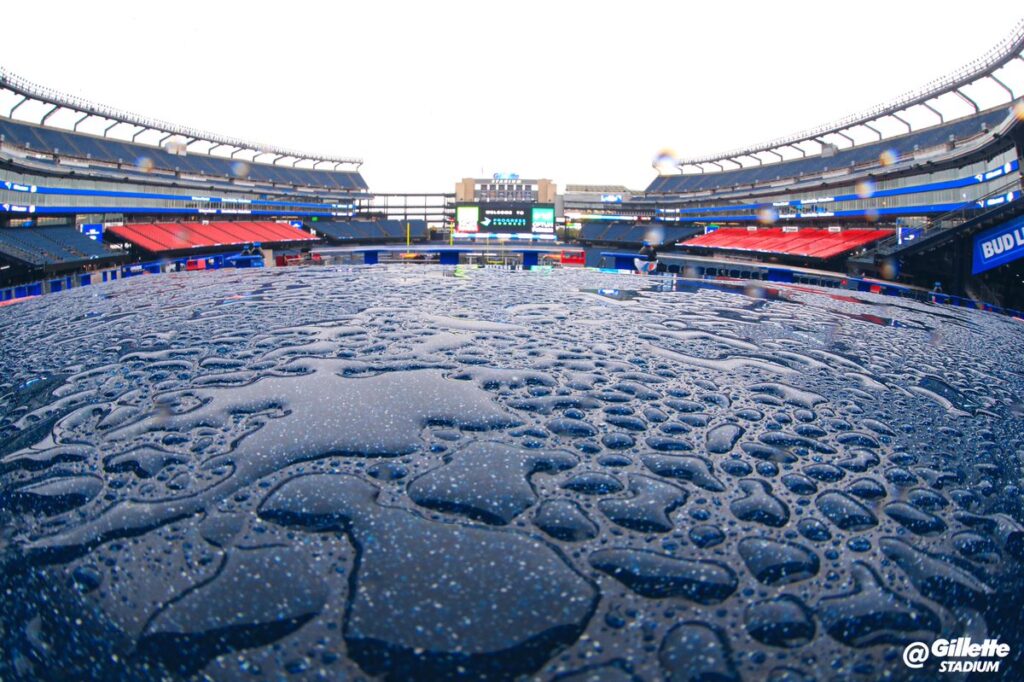 The Ravens head to Foxboro to take on the New England Patriots and new quarterback Cam Newton. The Ravens are coming off a huge second-half performance that lifted them over the Colts in Indy, while the Patriots skidded by the winless Joe Flacco-led Jets on a last-second field goal on Monday Night Football.

You know things have changed in the world when the Ravens go into Foxborough, MA as 6 ½ point favorites. No Tom Brady, No Julian Edelman, no Don’t’a Hightower and they’ll have properly inflated balls.

The hosts enter the game with a record of (3-5) record, (1-4) over their last five games. Quarterback Cam Newton hasn’t thrown a TD pass in four straight games and carries a 2:7 TD Pass to Interception ratio into the game. The conditions won’t be very conducive to throwing the football and as the game time forecast calls for rainy, windy conditions with temps in the upper 30’s to low 40’s.

This one will be decided on the ground.

* The number of completed passes in the game will equal the total score in the game – 36.

* There will be twice as many interceptions as touchdown passes.

* The Ravens will sack Newton three times but they’ll miss an opportunity for two other sacks, one of which will lead to a big play and set up Newton’s TD scamper, the only New England touchdown of the game.

* Fruit punch is back and he’ll be up to his old tricks when he forces another fumble that is scooped up by DeShon Elliott who rambles in for the score.

* The Ravens renew their bus pass as Gus Edwards is the offensive star of the game with a 100+ yard performance.

The Ravens win their 11th straight on the road in a game that will not be for sore eyes.

My weekend upset specials… #Texans over #Browns and the big upset, #Bengals over #Steelers! pic.twitter.com/jjnJuyqlNz

— Patriots quarterback Cam Newton has struggled this season, throwing for 1,417 yards with two touchdowns and seven interceptions. This is the third Baltimore has played against Newton so the coaches will have a solid grasp on his tendencies. Don Martindale will ramp up the pressure to force Newton into making mistakes. The Ravens will also spy him to shut down his ability to run.

— This is a game where the Ravens need to set the tone with their ground attack. The Patriots have struggled against the run, allowing 131 yards per game — 25th in the NFL. Even if Mark Ingram cannot play, both Gus Edwards and J.K. Dobbins can effectively carry the load.

— The Ravens don’t want to be one dimensional so Lamar Jackson will take some shots downfield. However, he has to be careful because New England’s secondary is solid and has managed 10 interceptions this season. If the Ravens lose the turnover battle, it could cost them the game.

— This is a good matchup for the Ravens and they’re catching a Patriots team in flux. John Harbaugh and his staff will not take any game against Bill Belichick lightly.

Please tell me anything about how the Patriots have played of late that would lead you to believe they can keep this game within a touchdown? I’ll wait…

The Patriots in the past few weeks have barely beaten the Jets and were embarrassed by the 49ers. That’s not a team that I would put money on to keep a game close against the Ravens. New England just simply doesn’t have the weapons. They’ll be hard-pressed to run the ball against Baltimore’s front seven and without the threat of the play-action, Cam Newton will continue to struggle (2:7 touchdown to interception ratio).

In the second half of Sunday’s matchup with the Colts, the Ravens’ offense seemed to have turned a bit of a corner (we hope). If that’s the case, they’ll make light work of the Patriots and cruise to a big win behind Lamar Jackson and the league’s top-ranked scoring defense.

After watching the Patriots struggle mightily against the Jets it’s hard not to be very confident in this game. Take out the obnoxious Foxborough crowd and this game should be a near lock. However us fans and the Ravens know better to never count out a Belichick-led Patriots. The Ravens really started to hit their stride in the second half last week.

— Lamar will have his best game of the season so far. Three passing touchdowns and one rushing touchdown. He’ll throw for over 250 yards and rush for over 70 yards.

— Hollywood Brown will have over 100 yards and 1 touchdown reception.

— J.K. Dobbins will rush for over 100 yards and 1 touchdown reception and average over 5 yards per carry.

— Marlon Humphrey will do his best Marcus Peters impersonation with a dazzling interception.

— Peters will again for the 3rd week in a row do his best Humphrey impersonation with a punch out forced fumble.

— DeShon Elliott will take the forced fumble back but fall short of the end zone.

The Ravens handled the Patriots with ease on SNF last season, and this New England team has far more holes, most notably at the QB position. I expect Baltimore to make another statement with an easy win.

– The Pats defense is the one solid part of their squad, but they’re not good enough to stop Baltimore. Lamar Jackson will toss 2 TDs and run for another, throwing for over 250 yards on 75% efficiency, as well. I expect a TD for Hollywood and Devin Duvernay.

– Mark Ingram returns and rushes for 50-yards and a score, while Gus Edwards salts the game away in the second half against a tired-out New England D.

– Defensively, Baltimore should have a huge advantage. They’ll be well-prepared to limit Cam Newton’s escapability, while the secondary is far better than the Patriot’s passing attack. I see them having a ton of trouble scoring on Sunday, especially when Ngakoue gets 1.5 sacks and Queen notches his first career INT.

Bill Belichick is one of the NFL’s greatest minds. He has a formula for just about everything. He also knows where he can get away without studying an opponent. I mention this because the Jets game was a hot mess, but they pulled out the victory. There is no way Bill is sleeping on Lamar Jackson. He’s aware that Lamar simply struggles to throw deep and outside the numbers. Look for the Pats to run single-high Cover 3 coverage with four zones underneath just like everyone who has done their homework. Unless Greg Roman changes his approach and starts using wheel routes and deep 50/50 balls, this offense is in trouble. However, Dez Bryant is a solid 50/50 ball guy. He climbs the ladder to attack the ball at it’s peak against defenders. One upside is the Patriots are 25th against the run. Should the Ravens go in with a 2019 approach of just running the d*** ball, this should be a W for the team. However, should Greg Roman want to make this difficult, he’ll need to challenge the receivers to win their 1-on-1 matchups deep on the outside.

As far as the Ravens’ D is concerned, they’ll need to handle business up front, pressuring Cam Newton with four and winning. Sure Coach Martindale is planning to blitz. He loves to hit that blitz button, but the team cannot get too cute with it as Cam is still mobile and tough to bring down. One stiff arm and Cam is out the back door with real estate in front of him. I doubt his ability to throw consistently accurately on the Ravens’ secondary.

As long as the Ravens don’t get cute with the offense and the defenses continue to shine on the backend, I see the Ravens pulling this one out.