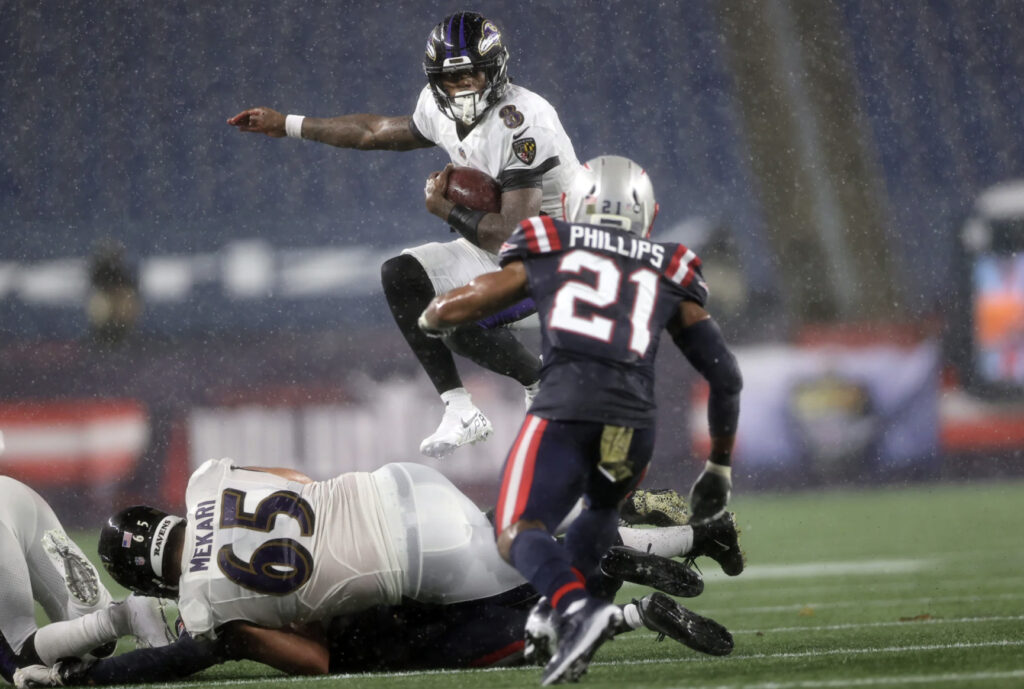 The Ravens limped out of Foxborough, Mass., battered and facing a critical point of their season.

A deflating 23-17 loss to the Patriots dropped the Ravens to 6-3 on the season, three games behind the Pittsburgh Steelers in the AFC North.

It’s not all doom and gloom.

The Ravens just need to go 5-2 or 4-3 the rest of the way to make the playoffs for a third consecutive year and they have a soft schedule in the month of December.

However, the team is becoming increasingly decimated by injuries that will be difficult to overcome.

Defensive end Calais Campbell did not play because of an injured calf, and nose tackle Brandon William left the game in the first half with an ankle injury.

The Ravens secondary was also short-handed because veteran Jimmy Smith missed the game with an ankle injury. Baltimore then lost another cornerback, Terrell Bonds, during the game. The Ravens already have three other cornerbacks — Tavon Young, Iman Marshall and Anthony Averett — on injured reserve.

Nick Boyle suffered a season-ending knee injury and the Ravens have to add another tight end.

“It’s an issue, for sure,” coach John Harbaugh said about the injuries. “You don’t want injuries. We’ve had … These are contact injuries, most of them. These are guys in piles, guys getting landed on [and] guys getting hit – that’s football. That’s what it is; we’re going to have these things, and that’s it. So, we just have to overcome them.

However, New England quarterback Cam Newton didn’t have to take many chances throwing the ball downfield because of the success of the running game. Newton was 13 of 17 for 118 yards with a touchdown, no turnovers and also ran for a score.

Adding insult to injury, the Patriots took control of the game late in the first half when wide receiver Jakobi Meyers threw a 24-yard touchdown to Rex Burkhead, who beat rookie linebacker Patrick Queen. The Patriots got the ball back to open the second half and scored on their first two possessions.

Harbaugh said the team was ready for the trick play but just didn’t execute.

“We talked about it all week,” he said. “We practiced it. I think we had it covered, but Patrick [Queen] just hesitated just a little bit. I would probably call that just a rookie mistake in terms of uncertainty in that situation. He was the guy in the coverage area. He didn’t make the … He had his guy; he was on his guy. He hesitated just a step or two, and that gave Burkhead a chance to get in position.”

Quarterback Lamar Jackson claimed last week that opposing defenses were calling out the Ravens’ plays at the line. He said this wasn’t the case with the Patriots, who kept him contained for much of the game.

Jackson completed 24 of 34 pass attempts for 249 yards with two touchdowns but had a careless interception in the final seconds of the second quarter that prevented the Ravens from potentially tying the game 13-13. Jackson also ran for 55 yards on 11 carries.

“The interception came right before halftime,” Jackson said. “We probably had like 10 seconds on the clock. We were just trying to make something happen – nothing really. But … the conditions [and] the weather wasn’t on our side.

“Every time we were up, it felt like [the rain] was coming down even harder. But, that’s just football – things happen. The weather isn’t always going to be perfect. We have to find a way to pull through, pull out a victory. And we just didn’t tonight.”

Another potential issue is at center where Matt Skura had several bad snaps for the second consecutive week that proved costly. Harbaugh attributed the challenges to the wet weather, but this team can’t afford those types of mistakes.

The Ravens need to regroup quickly because they face the Titans in Week 11 and running back Derrick Henry, who gashed them for 195 yards in the divisional playoff game last year. If both Campbell and Williams cannot play, the Ravens will have a tough time with that matchup.

Still, the players have not lost their confidence and they control their postseason destiny.

“We’re 6-3; we’re still in a good spot.” wide receiver Willie Snead said. “We want to win every game, but unfortunately, we didn’t win this one. So, we’re going to get ready for next week.”