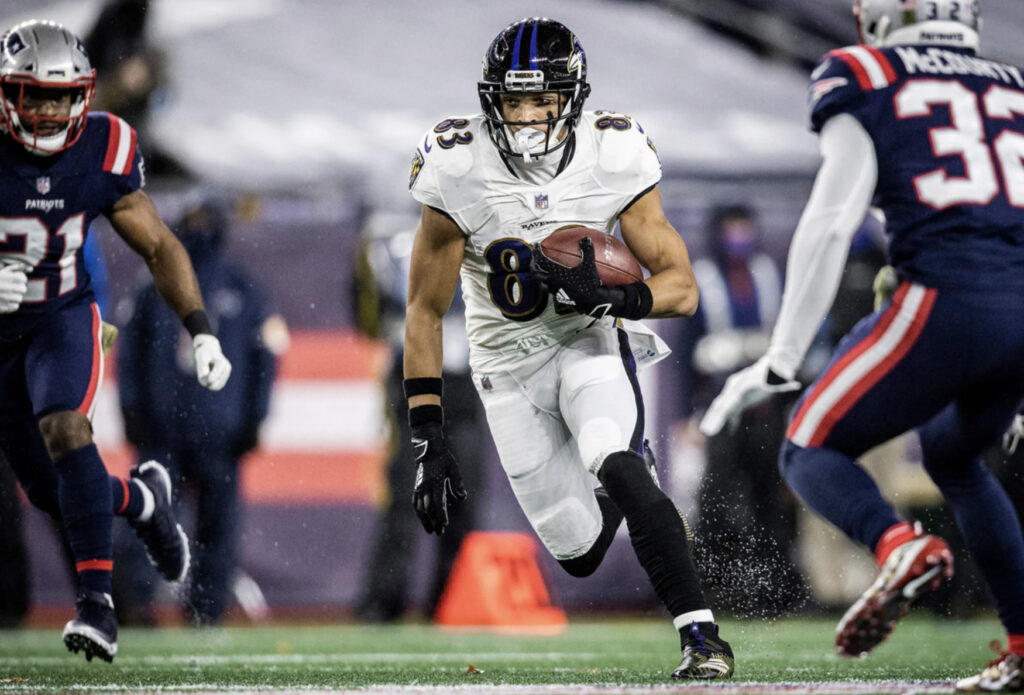 It sucks that Lamar Jackson is going to get the blame for this, but I guess that’s just the way it goes for quarterbacks.

There is a lot to digest and reflect on after Sunday night’s brutal loss to the Patriots. Here is whose stock is up and whose is down after the Ravens’ third loss of the season.

Willie Snead has quietly become the Ravens’ best wide receiver over the last few weeks. In three games this November, Snead has 14 catches for 207 yards and finally found the end zone, doing so twice on Sunday. It was nice to see him be rewarded for his recent success with that forward toss on the jet sweep, and Jackson found him on an 18-yard throw late in the third quarter.

His 14.2 yards per reception this season lead the Ravens, and it’s a higher mark than names such as Odell Beckham Jr., Travis Kelce, Adam Thielen, and DeAndre Hopkins.

Snead has an excellent nose for the first down marker. It feels like almost every catch of his moves the chains. He’s the perfect complement to the speedsters and big bodies that fill out the rest of the Ravens receiver corps.

It was encouraging to see J.K. Dobbins lead the running backs in snaps this week, especially with Mark Ingram back in action, even though his five carries equated to just 13 yards. Gus Edwards actually led the group in attempts with seven.

With Ingram coming back I was concerned the 30-year-old would be given the lead role, which he had up until his injury, right away. It turned out he didn’t, as he had just five carries. What frustrates me is that we saw how much the run game struggled to open the season when it looked like the coaching staff had a hard time figuring out how to appropriately divide the snaps and carries between the three. Then, we saw how successful Dobbins and Edwards were the last two weeks when they were by themselves.

To me, it seems hard for any of them to ever get going when their opportunities are split between three backs. Moving forward, I’d like to see it lean more in Dobbins’ and Edwards’ favor, and fortunately for Dobbins it did this week.

The Ravens “soulja” was M.I.A. on Sunday, as he has been most of this season.

Marquise Brown has struggled all season to gain separation on opposing cornerbacks and it showed again this week. It’s becoming more and more clear that Brown may never be a true number one receiver that fans hoped he would be. All offseason, we heard about how Brown’s foot was now 100% and that he had gained over 20 pounds of muscle, and it just isn’t translating to success on the field.

To make it even worse, it seems as if Jackson, in an attempt to keep his good friend happy, is forcing the ball to Brown when he just flat out isn’t open. If the former first-round pick really is the number one receiver that he says he is, he needs to be able to get some type of separation and go up and bring down those 50/50 balls, like the one J.C. Jackson picked off right before halftime.

I hope I end up being proven wrong on this, but the trend of the Ravens being unable to draft and develop quality wide receivers, to this point at least, is continuing with Hollywood. The emergence of D.K. Metcalf, A.J. Brown, and Terry McLaurin certainly doesn’t make it feel any better.

Looking back at past drafts where the Ravens selected a receiver early, it never fails that they almost always end up with the wrong one.

Last week it was the cuts on his hand, this week it was the rain. The bottom line is, Matt Skura cannot be the Ravens’ starting center moving forward if the team has any hopes of making a playoff run.

Inaccurate and inconsistent snaps have been a problem with Skura for years now, and this time the mishaps came in key moments. On 4th & 1 on the offense’s first possession of the second half, Ingram lined up in the wildcat and a snap wide to his right forced him to dive on the loose ball, take the turnover on downs, and give New England the ball back with a short field. Skura’s next blunder came after a nice 11-yard run by Jackson that moved the Ravens back 16 yards for a 2nd-and-26, effectively killing the potentially key second-to-last drive for the offense.

Former players and coaches always say the hardest thing to learn as a young linebacker is playing zone coverage. We know Patrick Queen can make plays, but his lack of presence in coverage is a concern and it’s something he isn’t getting better at as his rookie season goes on.

He had an exceptionally hard time keeping up with Patriots running back Rex Burkhead, who caught two touchdown passes. On the first, Queen froze for a second and then couldn’t catch up to Burkhead fast enough as he wheeled around Cam Newton‘s right-hand side, caught the dump off, and dove for the pylon. On the second, high school quarterback turned NFL wide receiver Jakobi Meyers delivered a perfect ball to Burkhead, covered by Queen, who stayed with the running back for most of his route but peeked into the backfield just long enough to let Burkhead slip behind him to make the grab. Queen also struggled at times getting off blocks and making tackles in the run game, and he rarely ever brought down Damien Harris by himself.

In two weeks now without L.J. Fort, Queen looks more lost than ever.