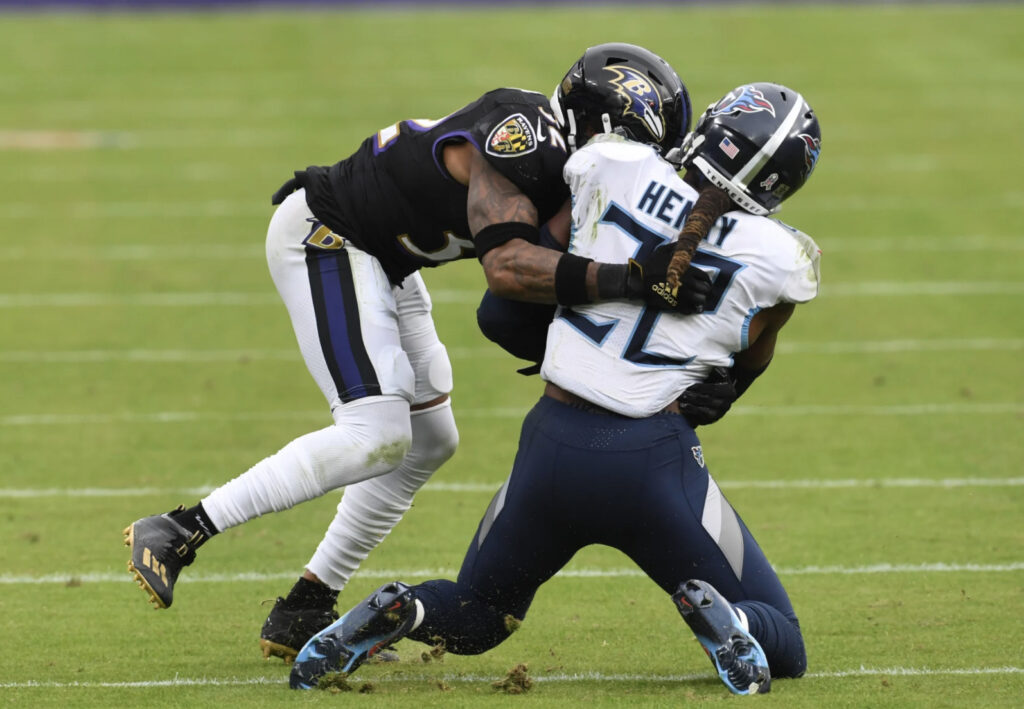 Ravens coach John Harbaugh showed the fire that was conspicuously absent from his players in a 30-24 loss to the Titans in Week 11.

Tennessee was clearly not intimidated by the Ravens when they gathered on their logo at M&T Bank Stadium minutes before their Week 11 kickoff. Harbaugh took offense to the bravado and had exchanged words with Tennesee cornerback Malcolm Butler and coach Mike Vrabel.

Harbaugh might have been the only one to defend the honor of the organization.

The Ravens uncharacteristically missed several key tackles and the offense was inconsistent again, committing several sloppy penalties that led to a loss for the second consecutive week.

Baltimore fell to 6-4 on the season and has to work its way back into the playoff picture beginning Thanksgiving night against the undefeated Steelers.

“We just had two losses in a row; games that we should’ve won,” Jackson said. “We had little hiccups in the game, but we still have to keep fighting through it. That team … It looked like that team wanted it more than us. They were playing physical. When we went up, I felt like we just took our foot off the gas. But we just have to keep it going for the team.”

One of the most troubling aspects of the loss against the Titans is the same mistakes that keep hindering the Ravens game after game, namely with penalties and the inability of the passing attack to make a significant impact on the game.

The defense also was a culprit in this loss and had one of the most troubling sequences in recent memory.

On a 3rd and 10 late in the fourth quarter, A.J. Brown took a slant pass from Ryan Tannehill and essentially bullied his way into the end zone by shaking off potential tackles by Chuck Clark, Marcus Peters, Marlon Humphrey and Patrick Queen.

Brown simply showed more heart to get into the end zone. That’s perhaps the most troubling aspect of this loss.

“We’ve just got to be better. That’s all I can say, really, honestly,” Queen said. “We did great through the third quarter. And we’ve been preaching this whole time that we have to finish the whole game. We just can’t have a quarter here or a quarter there – can’t have a half [here or there]. We’ve got to play all four quarters and dominate. When we went to overtime, we had a chances to stop them, and we didn’t stop them.”

The Ravens defense was solid for almost three quarters before it began to wear down in the fourth quarter and that was a fatal flaw against Derrick Henry.

The Titans running back managed just 37 yards in the first half. However, Tennessee kept feeding Henry and he began to break off big runs. Henry finished with 133 yards, including a 29-yard game-winning score in overtime.

Once again, the Ravens defenders look confused and resigned to let Henry run into the end zone.

“I’ll take responsibility. That last run – the touchdown in overtime – I played the block great, then went to make the tackle,” defensive end Derek Wolfe said. “He’s the best running back in the league for a reason. He got away from me, and that’s my fault. I’ve got to make that play, so I’ll take the heat for that. That’s on me. That’s nobody else’s fault but mine.”

After the game against Pittsburgh, the schedule gets easier and will help the Ravens make a push for the playoffs. Baltimore finishes the season with games against Dallas (Dec. 3), at Cleveland (Dec. 14), Jacksonville (Dec. 20), New York Giants (Dec. 27), and at Cincinnati (Jan. 3).

That was not much of a consolation for Harbaugh.

“We just have to win games – as many games as we can,” Harbaugh said.