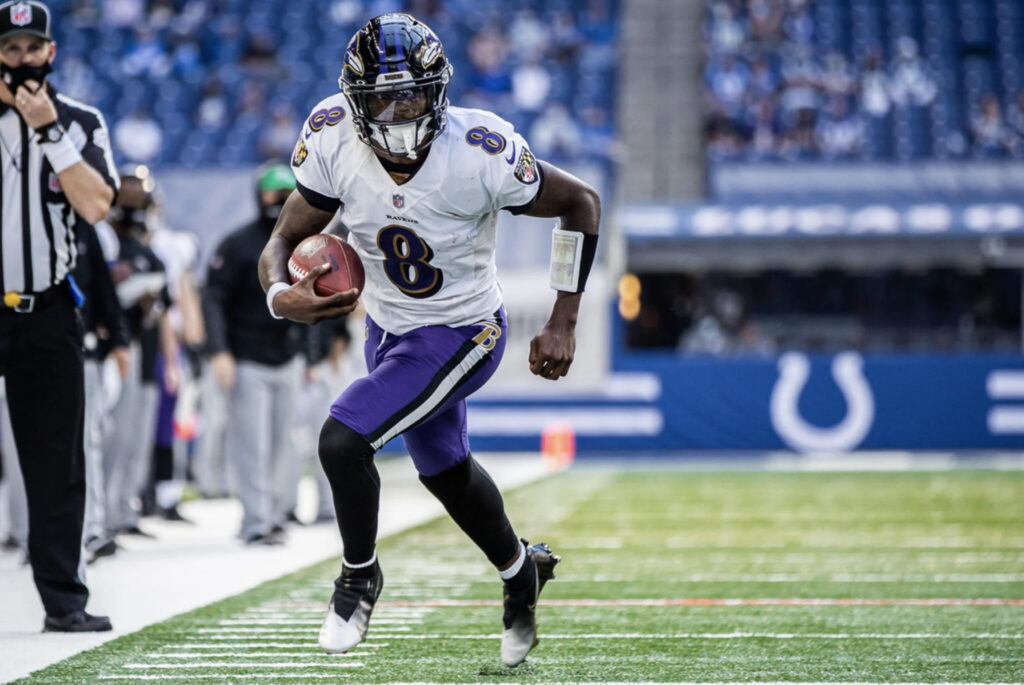 The last two weeks have been, possibly the two most chaotic weeks in the history of the Baltimore Ravens. Day after day we heard about Ravens’ players testing positive for COVID-19. So many Ravens were added to the COVID-19 reserve list that there were legitimate concerns about the team’s ability to field a full football team for their game against the Steelers. Speaking of the Steelers: that game was supposed to be played on Thanksgiving night. As the positive tests continued to roll in, this game, which was supposed to be played last Thursday, was ultimately postponed until tonight.

In Lamar Jackson’s absence, Robert Griffin III started the game in Pittsburgh. After suffering a hamstring injury that landed him on the injured reserve, Griffin III was replaced by second year QB Trace McSorley. McSorley completed two of his six passes for 77 yards and a long TD to Marquise Brown. Obviously, Jackson’s long-term health as it relates to COVID-19 comes first. But if Lamar does not play on Tuesday night, McSorley will be the starter.

The #Ravens can't hide it anymore. Lamar Jackson has been activated from the reserve-COVID-19 list along with Patrick Ricard, Justin Madubuike, and Morgan Cox.

There is no bigger key to the game for the Ravens than having their MVP QB available.

In Baltimore’s Week 11 overtime loss to the Tennessee Titans, rookie RB J.K. Dobbins made his case for a job as the Ravens’ first choice running back. Against the Titans, Dobbins carried the ball 15 times for 70 yards and a touchdown. He also added two catches for 15 yards. Gus Edwards and Mark Ingram combined for five carries that gained a grand total of 8 yards. Dobbins showed off the speed, agility, contact balance and playmaking ability that the Ravens liked enough to make him a 2nd round draft pick.

Against the Cowboys on Thanksgiving, Washington RB Antonio Gibson had a huge game. The rookie ran the ball 20 times for 115 yards and three touchdowns. Gibson had multiple gashing runs and ended the game averaging an impressive 5.8 yards per carry. If Dobbins can replicate the kind of game that Gibson had against the Cowboys, the Ravens will be in excellent position to get a crucial win on Tuesday night.

It seems to be the man focus of the Ravens’ fan base every week: The passing attack. It’s just not working. Jackson’s completion percentage is down about 3%. His passer rating is down about 20 points. Through ten games in 2020, Jackson has thrown the same number on interceptions (six) as he did in all of 2019. There are plenty of factors that could be blamed for the decline. Jackson doesn’t have enough weapons? Defenses are catching on to Greg Roman? The run game isn’t effective enough? Maybe it’s a simple “regression to the mean?”

It is too late in the 2020 season to make significant changes to the offense. Eric DeCosta can’t bring in a new draft pick or big-name free agent. The coaching staff can’t install a new offense. With just a handful of games left in the season, the Ravens have no choice but to assess the situation and maximize what they have on offense. With a constantly reshuffling offensive line that doesn’t give Jackson much time, a quick passing game is what the Ravens need to lean on. Most of Jackson’s throws should be quick hitters that give his targets room to work after the catch. This plan works perfectly for Dez Bryant. The Cowboys’ legend should have a lot of fun catching quick hitting screens and slants against his old team in primetime. 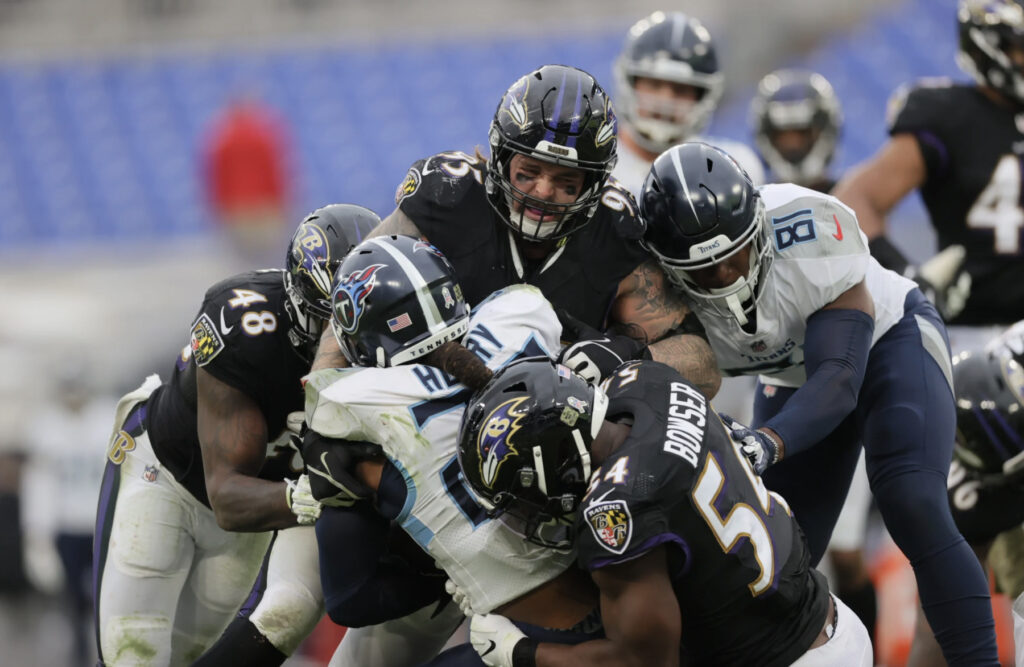 Baltimore’s offensive line situation has been a mess in 2020. Dallas’ offensive line situation has been worse. They lost All-Pro center Travis Frederick to retirement in the offseason. His replacement, Joe Looney, missed multiple games and has since been replaced. Star LT Tyron Smith is out for the season with a neck injury. Big money RT La’el Collins may miss the remainder of the season with a hip injury. Zack Martin, one of the best offensive linemen in the league, is out as well.

The Cowboys’ offensive line is a few steps up from mess. So far in 2020, they’ve used over 15 unique combinations of five offensive linemen. Wink Martindale and the Ravens’ defense needs to take advantage of Dallas’ offensive line woes on Tuesday. Martindale should attack the Cowboys’ backups to put the Dallas offense of their toes. Stunts, slants and shifts by the defensive line will really put a strain on a largely inexperienced group.

The Cowboys selected Ezekiel Elliott with the 4th pick in the 2016 NFL Draft. Since then, Elliott has made three Pro Bowls, one 1st team All-Pro and has twice led the league in rushing. Before the start of his 5th season in the NFL, Elliott signed a six-year extension with the Cowboys worth $90 million, with $50 million guaranteed, keeping him under contract through the 2026 season. Unfortunately for the Cowboys, they are now finding out just how much their big money RB has benefited from playing behind an excellent offensive line for most of his career.

Behind banged up offensive line and without Dak Prescott by his side, Elliott hasn’t had his usual production in 2020. Elliott currently ranks 10th in rushing yards, but 39th among qualified players in yards per carry. The Ravens can take advantage of the Cowboys struggles on offense by ensuring that Elliott’s struggles continue. Martindale can take Elliott out of the game by keeping extra defenders around the line of scrimmage. If the Ravens get a lead and make Zeke Elliott a non-factor, it’s hard to imagine the current version of the Dallas offense finding much success.

Go for the Strip

Where the 2020 Ravens’ offense has been disappointing, the Baltimore defense has been great. Despite their struggles with injuries and the COVID-19 list, the Ravens’ defense ranks in or near the top 10 in most significant statistical categories. If the unit can get healthy, Baltimore has the type of defense that could carry them in the playoffs.

One statistical category that the Ravens’ defense leads is forced fumbles. Currently, Baltimore forces an average of 2.2 fumbles per game. Superstar CB Marlon Humphrey is leading the way for the Ravens in a way that is drawing comparisons to Charles Tillman and the “Peanut Punch”. Humphrey has six forced fumbles this season. The three players tied for 2nd place in the NFL have four each. Marcus Peters (3), Yannick Ngakoue (3), DeShon Elliott (2), Chuck Clark (2) and Patrick Queen (2) all find themselves towards the top of the NFL’s forced fumbles leaderboard.

Cowboys’ RB Zeke Elliott finds himself at the top of a different, and not so desirable, leaderboard. Elliott leads all NFL RBs in both fumbles and fumbles lost. If the Ravens have Lamar Jackson, they should win on Tuesday night. If they don’t, it’s going to be a close game.

Either way, getting a big takeaway from a fumble-prone RB could be a big help for the Ravens’ cause.

Injuries to the offensive line have put the Cowboys in some very tough spots. When healthy, Tyron Smith and La’el Collins make up one of the best tackle pairings in the NFL. With Smith and Collins out, the Cowboys will make a long journey down the depth chart to find their starting offensive tackles for Tuesday night. The left tackle is likely to be Brandon Knight. Knight, an undrafted free agent signing in 2019, played most of his career at right tackle for Indiana. The starting right tackle for Dallas is likely to be rookie undrafted free agent Terence Steele. Steele, a Texas Tech product, has had to step in multiple times already in 2020. Yannick Ngakoue is looking to land himself a massive contract this offseason. Along with the rest of the Ravens pass rushers, he will be looking to pad his sack stats against the depleted Dallas OL.