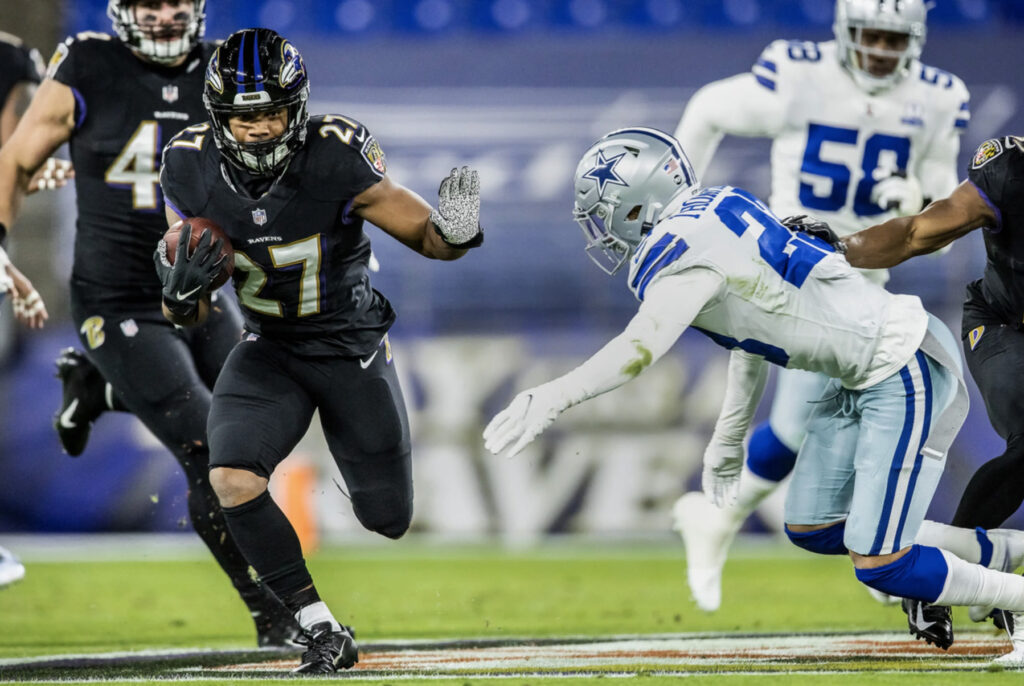 This is a J.K. Dobbins Appreciation Blog.

Hi, my name is Adam Bonaccorsi, and I was big mad at the J.K. Dobbins draft pick during the 2020 NFL Draft.

I would like to admit that I was dead wrong, and I would like to make amends for my stupidity with this Dobbins appreciation blog. Not just to clear my conscience, but because he deserves far more love than he gets, especially outside of Baltimore.

So who is J’Kaylin Dobbins?

Only the most effective running back in the entire 2020 rookie class, that’s who.

You may be saying to yourself “what about James Robinson, or Clyde Edwards-Helaire, or Jonathan Taylor? Clearly, Dobbins doesn’t have as many rushing yards as anyone in that trio, but everybody knows that those are usage stats. All three are workhorse backs, whereas Dobbins is firmly entrenched in a three-headed backfield that limits his touches.

But when he gets the rock? He’s gone.

Yes I know Ellington and Rawls were flash-in-the-pan guys, but they were also late round picks (Ellington) and/or UDFA (Rawls) so the expectations for a prolonged career were never there. Plus injuries and such didn’t help (looking at you too, Kerryon!)

Sticking with the rookie narratives, let’s chat about how Dobbins is hardly discussed compared to the other rookie backs around the league, thanks in large part to a lack of opportunity, as JKD currently has just 83 carries.

Compare that to the aforementioned group of Robinson (212 carries), Edwards-Helaire (151), and Taylor (148) and it’s a far cry from what JKD’s fellow rookies are seeing this year.

But what if we projected out to those carry totals, based on Dobbin’s 5.4 YPC?

Let’s take it another direction: strictly looking at YPC, Dobbins sits just behind Nick Chubb (6.0 ypc) for the league lead, and slightly ahead of Miles Sanders (5.3) and Aaron Jones (5.2).

The second highest YPC of all NFL running backs this season is pretty good, I guess…

So what gives with Dobbins’ lack of usage in Baltimore?

Currently, his 83 carries are third among Ravens ball carriers, behind Gus Edwards (101 carries) and Lamar Jackson (116). Dobbins is currently ahead of Mark Ingram (63), but that’s mostly due to Ingram missing three games this season. In games where both Ingram and Dobbins have been active (nine games), Ingram has out-carried Dobbins by a total of 63-53, so it’s fairly clear that Dobbins is being stifled…

Or at least he was.

Here’s the first five games where both Ingram and Dobbins were active:

Dobbins clearly was making the most out of his opportunities early on, despite how limited they were (3.3 carries per game). Now here’s the last four games where Ingram and Dobbins were both active:

Clearly the tables have started to turn for Dobbins, and they need to keep trending in this direction for the elusive running back.

One more point worth discussing is his usage within the Ravens backfield in terms of snap percentage. Last year, Ingram led all Ravens running backs with 166 carries through 12 games. On the same trajectory (based on YPC & TD rate), Dobbins would have 896 yards & 8 TD, to date.

Why is he not getting the rock more?!

It could happen on Monday, or it may not happen for a few more weeks. Hell, he may end the season still tangled in a three-way backfield with a close to even carry share. But when the day finally comes and he becomes the lead back in Baltimore, J.K. Dobbins is literally going to bust onto the NFL scene in a huge way, as he begins his path to becoming the greatest running back in Ravens history.