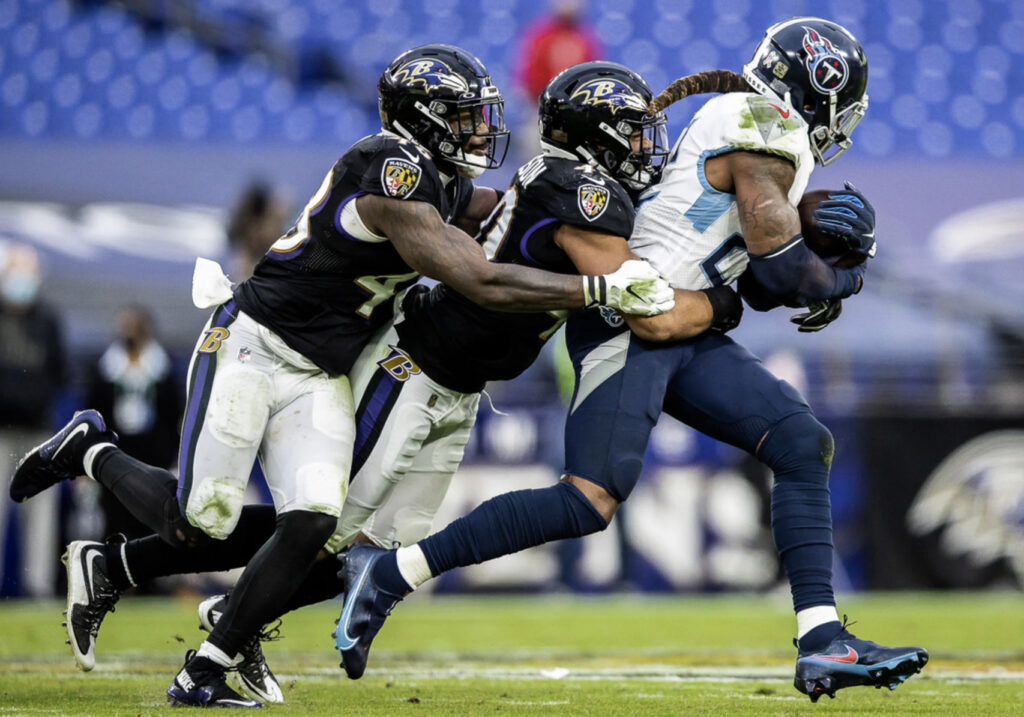 In the game of the year, on the road, in a prime time must-win game, with the season on the line while dealing with cleat issues and cramps, Lamar Jackson shined the brightest, and it was just a delight to watch. He got out to a lead early with his legs, and led the comeback late with his arm.

Not that I care much for the outside news and the narratives that surround Jackson, but his performance should put all of them to rest. The “can’t lead a game-winning drive” and “can’t win a game with his arm” monkey is off his back.

Early Monday night, the contrast of what each of the two teams were asking of their QBs could not have been more evident. Kevin Stefanski and the Browns made it simple for Baker Mayfield, utilizing screens and play action to get pass catchers in space with room to run. Meanwhile, Jackson was often flushed out of the pocket, receivers could not get open downfield and he was relied on to create nearly all the offense by himself.

Late Monday night, he closed out the show with the play of the Ravens’ season on fourth down and followed it up with a textbook two-minute drill. He never flinched or panicked, he stayed poised and made sharp throws from the pocket and managed the clock well.

Lamar Jackson recorded a 99.5 QBR last night, the highest QBR game of any QB this season.

Trace McSorley also deserves some respect. Suddenly called upon late in a close game, he too didn’t panic, hit Marquise Brown for what should have been a first down and finally did connect with Willie Snead for one on the next drive that set up the Jackson touchdown throw to Brown.

J.K. Dobbins looks like he’s improving as a runner every week. He did a great job of finding the holes his offensive line produced and hitting them hard, but even he fell victim to the bad field conditions a time or two.

His best run of the evening wasn’t either of his two carries that went for over 10 yards or the goal line score in the third quarter, but rather his two-point conversion to put the Ravens up by seven late where he met Cleveland’s Andrew Sendejo at the goal line and won the battle after a hit louder than the celebration afterwards.

After a disappointing offensive possession that ended with Jackson missing two deep balls to Snead and Mark Andrews, Tyus Bowser stepped up and gave the offense the ball right back with his third interception of the season. He read the play to perfection and was right where he needed to be to make the catch.

Full list of #RavensFlock outside linebackers with 3+ interceptions in a single season in team history:

Just over $93 million are being spent on Baltimore’s defense this season, the third highest of any team in the NFL behind only Kansas City and Buffalo. Yet, that expensive defense seems to constantly fold and crumble in the moments when they’re needed to step up and make a stop the most.

This game should not have been as close as it ended up being. With Baltimore up 34-20 and only one quarter to go, Marcus Peters fell to the ground in coverage on Rashard Higgins and allowed an easy touchdown, then a lucky two-point conversion closed the gap to 34-28 on a deflected pass. On Cleveland’s next possession, the Browns marched down the field on 12 plays in six minutes to go up 35-34. After the Lamar to Brown touchdown just after the two minute warning, the Browns did it again, this time needing only four plays and 47 seconds to go 75 yards.

Baker Mayfield, Nick Chubb and Kareem Hunt had whatever they wanted late in the game. They picked on a depleted secondary and the pass rush again failed to finish and bring Mayfield down. A defense with that many cap dollars invested in it has to be reliable in crunch time in order to hold on to leads late in the season.

The Pro-Bowl Mark Ingram we saw last year is no more; he just isn’t the same player. While we’ve known this and accepted this as fact for weeks now, his usage and playing time suggest that the Ravens coaches are starting to realize it too. He played just one snap on Monday, a flea flicker on the Ravens’ first offensive snap that resulted in a sack. The 30-year-old never saw the field again until he ran on to it to celebrate Justin Tucker’s game winner.

As unfortunate as it may be, he’s approaching “inactive on gameday” status.

Considering the uncertainty, lack of depth and injury trouble at other key positions like cornerback and the defensive and offensive lines, it frankly makes no sense to keep four running backs active while using one of them for just one snap and no special teams contribution.

I’m surprised it didn’t happen Monday. Jimmy Smith had been dealing with injury the last several weeks and got knocked out of the game quite early, and with Anthony Averett inactive, Davontae Harris was left to play the majority of the game’s remaining snaps at outside corner. Even Peters exited with an injury for a stretch, leaving the defense with just two healthy cornerbacks at one point.

There are other, more important positions that could use the depth that Ingram takes away by being active on game days. If he’s only being used for one play, it may be time to pull the plug.

I know, I know. He had the catch. But don’t let it overshadow the fact that the drop issue has not gotten better.

He dropped three more targets on Monday, one of which would have given a Trace McSorley-led offense a first down. Something else that Marquise Brown has shown is that his route tree is not growing. If it’s not a quick curl or out route against soft coverage or a go or a post route where he can use his speed to gain a step and take the top off the defense, he simply does not get open. It doesn’t help the fact that he already struggles to make catches in traffic.

Maybe blame that on the coaching staff and their failure to put Brown in the situation that best uses his talents, but so far he hasn’t given them a reason to have faith he can do anything other than those few routes that anyone with his speed would be able to.

The game began with a rotation at right tackle, similar to what we saw last week in the victory over the Cowboys. The entire offensive line struggled in pass protection early on Monday night, but Tyre Phillips’ inefficiencies were the most obvious. The rookie looked overmatched on just about every pass attempt. In response, the rotational approach was abandoned and D.J. Fluker took over full time.

Phillips gave up sacks to Olivier Vernon on back to back drives that he was in for, the Ravens’ second and fourth possessions (Fluker played the third). Both drives ended in three and outs. Fluker did a much better job of slowing down Vernon and eliminating pressure from the right side. The pass protection as a whole took off once Fluker took over.