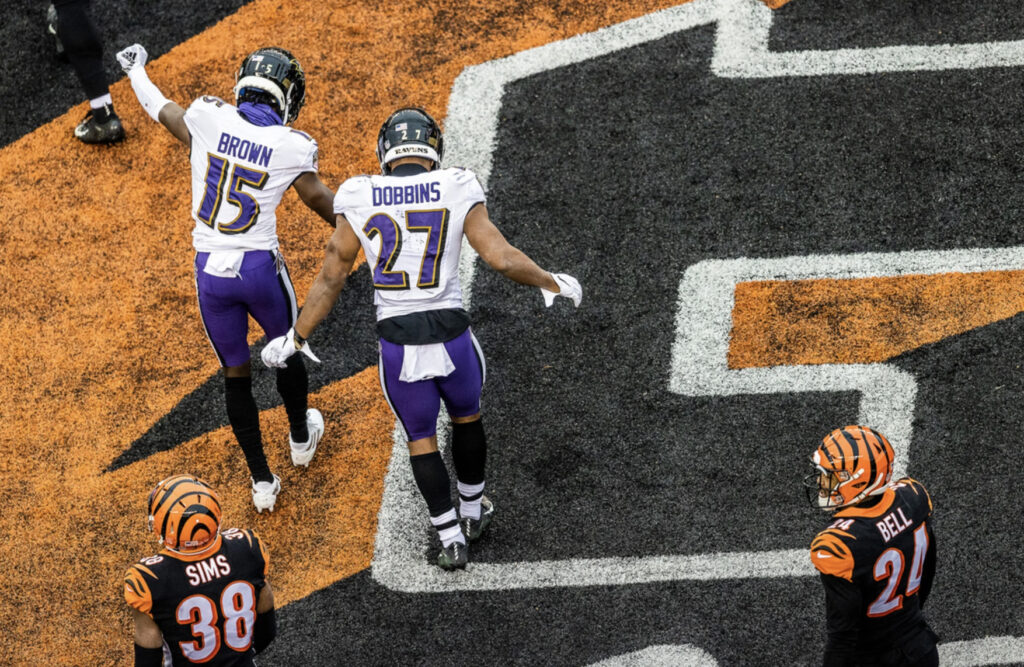 This one is obvious, right?

What a day for the rookie. J.K. Dobbins capped off a career day with a 72-yard touchdown run with Tyler Huntley on the field to finish the game with 13 carries, 160 yards and two touchdowns. The first score on the day and his 8th of the season set the record for touchdowns in a season by a Ravens rookie, and the second on the day and ninth on the year made it even more of a challenge for whichever future Raven attempts to break it next. Want another record? Sunday was Dobbins’ 6th consecutive game with 50+ yards and at least one touchdown, which ties Eric Dickerson and Franco Harris for the longest streak by a rookie since the merger.

Patience at top of run, square shoulders, acceleration to the crib!! Inside zone teach tape!@Jkdobbins22 🔥🔥🔥 https://t.co/AmBTfsOZ8f

The breakaway speed that was on full display on that 72-yard run is something we haven’t seen much of from Dobbins before Sunday. That home run ability is something that will set him apart from other comparable backs.

Hadn't really seen Dobbins have to win a foot race this year. Yep. He can. Another TD drive without a pass for the #Ravens. 38-3.

The turnaround from the first half to the second half of the season on the offensive side can definitely be credited to Lamar Jackson returning to MVP form, the offensive line solidifying itself or even improved play from the wide receivers, but the rushing numbers have taken off since Dobbins became the lead back in a loaded backfield.

In games that Dobbins leads all running backs in attempts, the Ravens are 6-1. Furthermore, the team has more rushing yards in the last five games (1,337) than they did in the previous 10 before that (1,264).

Needless to say, the offense’s efficiency has taken off since Dobbins took over the lead role, and it may just be getting started.

I’m loving what we’re seeing out of Miles Boykin as of late. His route on his touchdown grab was great, and it’s been awesome to see him become more than just a run blocker, which he also did well on Sunday.

On his touchdown, you could see the Cincinnati defense’s focus on Mark Andrews with three defenders surrounding him which left Boykin open over the deep middle. If you remember back in the Week 5 win over the Bengals, safety Jessie Bates claimed that shutting down Andrews and Marquise Brown was their main focus. “We know where Lamar wants to go. It’s either ‘15’ or ‘89’.” That focus stayed true this week, and Lamar made them pay.

Boykin has really come along in the second half of the season, coinciding with the signing of Dez Bryant. Other Ravens have spoken about Bryant’s positive influence on the team since his arrival. Could his experience and knowledge be rubbing off on the second-year man?

Maybe I’m pushing my luck by labeling Brown as a riser in almost every game the past month, but his stock truly is soaring. His drop on a perfectly placed Jackson deep ball was crushing, but he bounced back and moved on like a veteran would.

His future outlook is starting to look more and more like what the Ravens hoped it would when they made him the first receiver off the board two drafts ago, which is the complete opposite of what it had been the first half of the season. I’d still say WR is one of the team’s top needs to address in the offseason, but Brown stepping up during the playoff push has been encouraging.

Anthony Averett’s improvement this year has been a pleasant surprise for a secondary that has been decimated by injuries all season long. He came into the year as the 5th cornerback on the depth chart, and has now found himself starting as the outside corner opposite either Marlon Humphrey or Marcus Peters for the third straight week.

He had two pass deflections on Sunday. The first, he stuck right on the hip of Alex Erickson on a quick in route and broke up the pass. The second, he jumped in front of an out route by A.J. Green and got a hand on the ball, nearly going the other way for six.

Averett is playing the best football of his career at the perfect time, and he’s become quality depth at a position where the Ravens lack just that.

Chuck Clark found himself in the Stock Down spot last week due to his struggles to cover one-on-one at times, so this game was a nice bounce back. He made several big plays including notching his first interception of the season featuring some toe drag swag.

He made a big pass breakup on a pass intended for Green down the right sideline that would have given the Bengals a big gain and a first down in the third quarter. He also made some stops in the run game, bringing down Samaje Perine twice.

No bad vibes heading into the postseason – I am not going to nitpick (as I’ve been forced to do lately) this week.