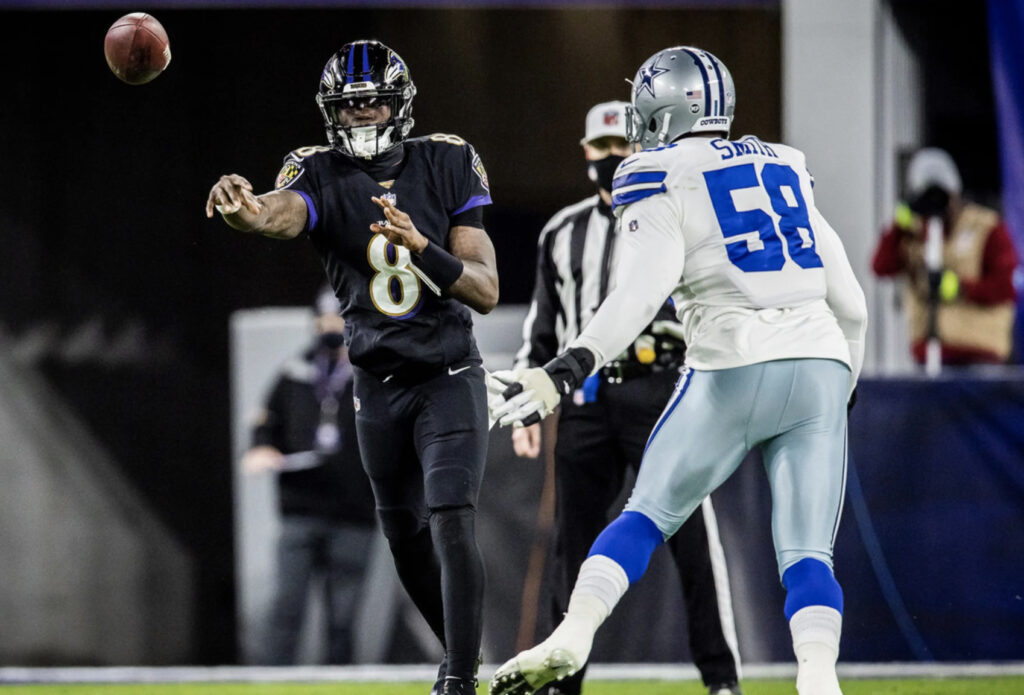 Ravens general manager Eric DeCosta envisions Lamar Jackson being the franchise quarterback “for many, many years.”

That could be a costly proposition for the team, especially with so much uncertainty surrounding the salary cap and other needs with the roster.

Jackson won’t merit a deal similar to Chiefs quarterback Patrick Mahomes, who signed a $500 million extension last offseason. Jackson’s new deal will likely be closer to the four-year, $156 million extension that Deshaun Watson sighed with the Texans in September. Watson has since asked for a trade.

Jackson would likely merit a four-year, $168 million deal, and the Ravens appear willing to commit to the former first-round pick.

“I will be talking with Lamar probably within the next 10 days or so,” DeCosta said in a meeting with reporters on Jan. 25. “He’s down in Florida, but we’ve got a great relationship. He’s got a great relationship with this organization. He’s a very easy person to talk to and certainly deserves a contract. He has played phenomenal football over the last couple of years, and our intention – and my intention – is to keep him in Baltimore for many, many years.”

Over his three-year career in Baltimore, Jackson has thrown for 7085 yards with 68 touchdowns and 18 interceptions for a 102.6 quarterback rating. He has also run for 2,906 yards with 16 scores over that span. He is the only quarterback in NFL history with a pair of 1,000-yard rushing seasons.

The Ravens have made the playoffs all three years that Jackson has been the starter and won a pair of AFC North titles. Jackson, however, has gone just 1-3 in the postseason, which had made him a lightning rod for criticism even though he’s only 24 years old.

DeCosta needs to get Jackson more support after the Ravens passing attack ranked dead last in the NFL last season. The Ravens need to add a play-making wide receiver that can consistently make plays downfield.

However, DeCosta was unsure whether that player will arrive via free agency or through the NFL draft. The Ravens also don’t want to stray too far from their running attack that is among the best in league history.

“Receivers come in all different sizes and shapes,” DeCosta said. “We’ve got the Draft; we’ve got free agency. I think one of the things, as you think about the passing game, is we throw the ball a lot less than a lot of other teams do.

“That’s by design; we’re a running football team. People like to look at yards per game as a good metric of a passing game, and I think we threw the ball probably 150-160 times less than any other team did this year in the NFL. We want to be precise, for sure. I think that we want to be more efficient.”

DeCosta also needs to upgrade the offensive line’s pass blocking. Jackson was sacked 29 times this past regular season, and eight times in the playoffs. Jackson also suffered from some inconsistent play from his centers, who had issues snapping the ball.

In the end, DeCosta wants to mountain a balanced team, but a huge investment in Jackson appears inevitable and that could ultimately work in the Ravens favors attracting other playmakers.

“Players want to play with Lamar Jackson,” DeCosta said. “I really do kind of laugh at the notion that players don’t want to come here and play with Lamar, because he’s one of the very best young players in the NFL. We’ve got a lot of other young players, as well, who fit that criteria. So, I think it’s a great place to play.”