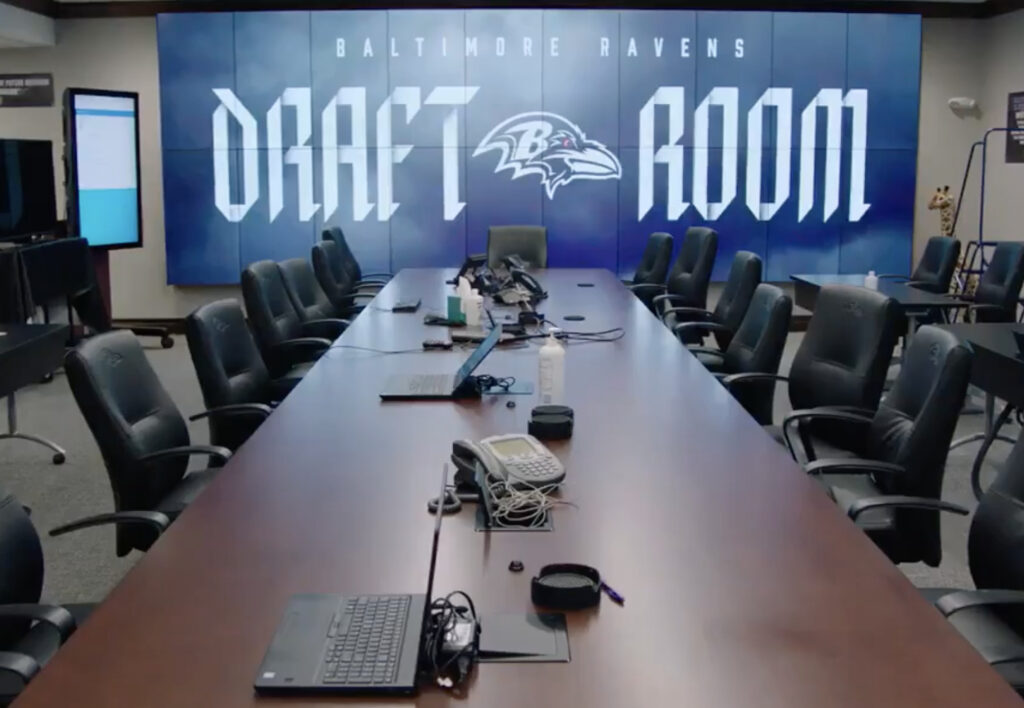 After picking WR Rashod Bateman at 27, and EDGE Jayson Oweh at 31, the Ravens enter Day 2 of the NFL Draft without a pick in the second round, and two in the third (one a compensatory).

So what will we see? RSR staff project the night here…

Eric DeCosta is at his best when he can sit back and pluck the BPA and that’s the position he’ll find himself in tonight. With a fairly developed roster (assuming he has a FA plan at RT) he can sit back, smoke one of Steve Bisciotti’s cigars and play with house money. My bet is that he’ll go with a tight end and then take the best defender on their board. For specifics on the tight end, let’s just say it’s time to hunt.

Don’t listen to me. I got a lot of mock picks wrong last night, as always, and the Ravens could not have gone more against the grain of their recent edge rusher picks with Oweh. But if you’re still reading, here we go with day two predictions – harder to be bold now, even though I wasn’t that bold yesterday…

— We will see the Ravens select a Safety tonight. Moehrig didn’t get taken on night one and there are a lot of guys still available that fit what they like.

— The Jaguars will continue to build their offense/neglect their defense and will take three offensive players from their four picks.

— Azeez Ojulari, Landon Dickerson and Terrace Marshall Jr. will fall to the bottom half of the 2nd round

— At least one player regularly talked about as a 2nd round option for the Ravens when they had pick 58, like Joseph Ossai, will fall to them in the third round but the Ravens won’t pick him.

— The final thing, and I’m not willing to commit to this as a prediction, as I do not think it will happen. With all the premium talent still on the board, I do wonder if the Ravens will consider selling a future draft pick to come up much further, and into the second round to take a falling talent who is high on their board. It would have to be a premium talent as they see it, who has a strong chance of falling on day two but probably not all the way to the late third.

Much like Thursday night there will be a long wait until the Ravens pick on Friday night. The toughest part will be watching how many quality players go off the board that would’ve been ideal selections for the Ravens. Players like Teven Jenkins, Landon Dickerson and Creed Humphrey will be long gone as Ravens fans helplessly watch them get picked.

I’m pretty sure with one of the two third-round selections, the Ravens will select an offensive lineman. That could be a right tackle or a center prospect depending on who is available. I wouldn’t even be surprised if both third rounders were offensive lineman.

Other than offensive line, other positions that could be addressed tonight are safety/slot corner, tight end and defensive tackle. Some players to watch for that could be available are Elijah Molden, Richie Grant, Josh Myers, Spencer Brown, Walker Little, Brevin Jordan, and Hunter Long.

The Ravens clearly went BPA in the first. According to Eric DeCosta, they had offers to trade back but decided not to. Between all the pass rushers, O-linemen, WR and Moerhig sitting there, the Ravens drafted Bateman and Oweh. The board fell to them in a way that I’m sure surprised them. They had a plethora of guys to choose from that fit both the idea of need and value. The fact that they took Bateman and Oweh tell us they took BPA for sure.

With no second-round pick, it’s tough to say what they will do tonight in terms of any one player. Trading up is a possibility, using one of the 4th round picks. They could move up about 10 spots if they decided to do that. They are unlikely to trade both 3rd rounders to move up in the third round. I would guess that one of the two picks tonight is an iOL. I also wouldn’t be surprised if they took a TE tonight. I suspect they take one in the mid rounds and if the right guy is there, they will do it tonight. To be safe, I will say they go iOL and DL or secondary tonight.

— With the amount of talent that fell out of the first round, the Ravens will stand pat at 94 and 104. EDC’s comments about not trading up could be a smokescreen, but the Ravens have always been content to let the draft come to them. If someone like Walker Little or Quinn Meinerz really start to fall, they could trade up, but I still think they wouldn’t be willing to pay the price to trade up into the second round.

— One pick will be on the offensive line and the other will be the best player available, most likely on defense. Given the state of the board right now, I’m guessing that defense pick is either going to be a defensive back or defensive tackle. A versatile safety would be a great chess piece for Wink and the Ravens need to get younger along the interior of the defensive line.

— The only tackle they may draft in the third round is Stone Forsythe out of Florida. The other tackles remaining either don’t have the arm length or are developmental projects that aren’t worth a Day 2 pick. Guards Deonte Brown and Ben Cleveland are popular picks, but look out for Illinois’s Kendrick Green, whose experience at center should be intriguing for the Ravens.