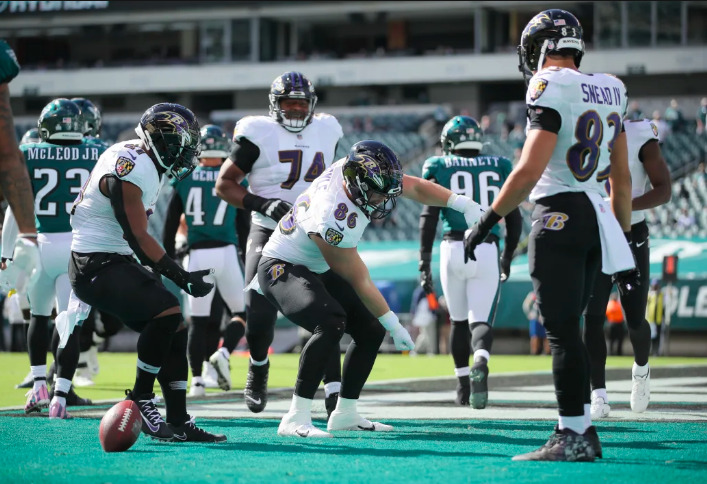 The Bully-in-Chief is back.

While the Ravens have understandably been putting an emphasis on improving their downfield passing game this offseason, another powerful weapon should be back in the offense’s arsenal this coming season. A brutal, punishing weapon by the name of Nick Boyle.

Limited to nine games last season before a gruesome leg injury suffered against the New England Patriots stole the rest of his 2020 campaign, the tight end’s expected return to the Ravens lineup is not accompanied by the same gusto as the new arrivals in the receivers room, but it might be just as impactful. When the Ravens fielded a historic offense in the 2019 season, it was Lamar Jackson who stole the headlines, and with good reason as he generated an MVP season.

But Boyle and fullback Patrick Ricard brought the X-Factor nasty. And they brought it by the bucket.

The 2020 Ravens offense never really seemed to re-capture that same magic in an up-and-down season— though they were still a good unit. The injury to Ronnie Stanley certainly figured in, as did the retirement of franchise icon Marshal Yanda, but the 2019 Ravens came at opponents with two “honorary offensive linemen” in Boyle and Ricard. The coaches moved them around before the snap, collapsed defense’s edges with one or the other and generally bashed the senses out of anyone who got in their way.

While some teams zig, others zag. The Ravens bashed. And beat. And stole people’s lunch money. And the bulliest bully in the cafeteria was Boyle.

Yes, teams can bring in an extra tackle or stack multiple tight ends on one side of the formation to attempt to create mismatches, and the Ravens did do that quite a bit in 2020. But Boyle was able to be that moveable chess piece who could line up in the backfield, on the line or detached. And while not nearly the same kind of receiving threat as his counterpart Mark Andrews, Boyle is a functional NFL receiving target who can beat teams who don’t account for him every snap.

Consider that Boyle caught 45 out of 60 targets thrown his way between the 2019 and 2020 seasons, good for a 75-percent catch rate, per Pro Football Reference. In that same time period — albeit with a far different volume — Andrews snagged 122 out of 186 targets, for a 65.6-percent rate. I’m not arguing even a little bit that Boyle is a more effective receiver than Andrews, or that their targets look remotely like each other’s, but Boyle is a reliable option for Jackson, and he catches more balls than he doesn’t.

For part of last season it appeared that Jackson only looked at Andrews or Marquise Brown when he had a play he absolutely had to have, with a sprinkling of Willie Snead mixed in from time to time. Adding Boyle back for short and intermediate routes, and hopefully a new trust or two forged between Jackson and Rashod Bateman and Sammy Watkins, and the passing game possibilities are significantly opened. If defenses know they have to cover everybody, well, their margin for error decreases exponentially, right?

And in a sport that relies on mismatches and opponent mistakes, that is key.

Of course, Boyle’s bread and butter is how he impacts the run game. With Jackson’s unicorn speed and agility at quarterback, and the tandem of JK Dobbins and Gus Edwards, the pieces are there in abundance in the backfield. A re-worked line, gargantuan fullback Ricard and the return of Boyle to obliterate opposing edges is enough to make a Ravens fan salivate at the possibilities. If that revamped passing offense can do what the optimistic among us believe it can, that running game should be even more efficient.

And it will often be led by their Bully-in-Chief.