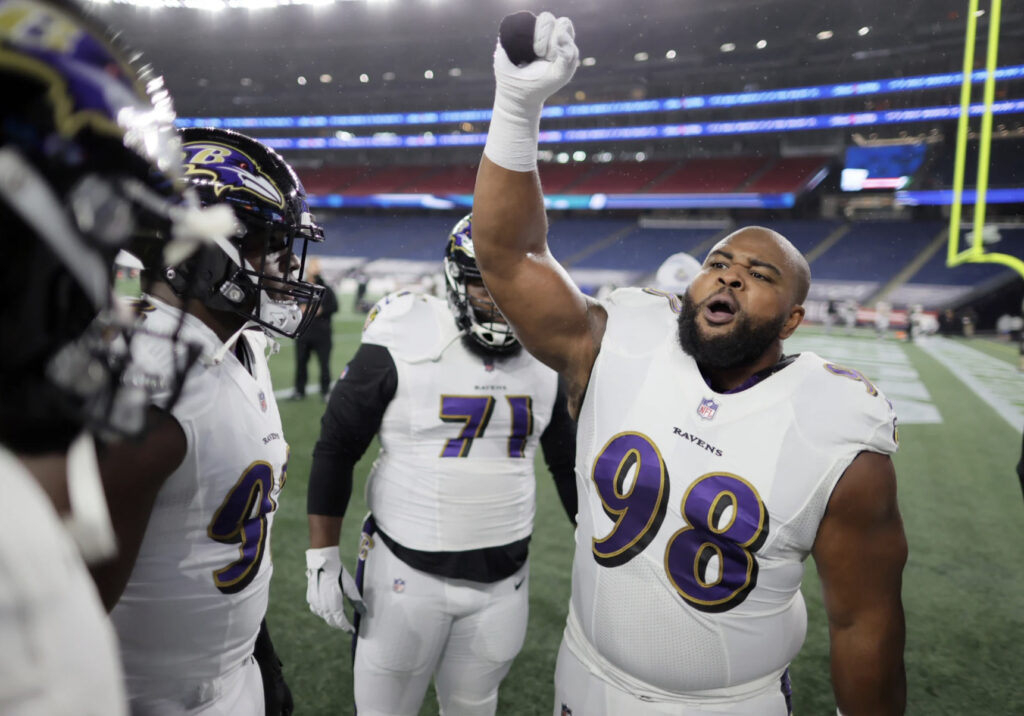 Is this the final year in Baltimore for Big Baby?

In a pass-first league that puts a premium on long defensive linemen who can get upfield in a hurry to disrupt modern offenses, Ravens defensive tackle Brandon Williams is a bit of an anomaly.

Standing 6’1 and weighing about as much as your grandfather’s Buick, Williams is in the mold of those throwback nose tackles of yesteryear who planted a proverbial flag in the middle of the field, grappled with multiple offensive linemen each play and basically bloodied their knuckles and shortened their necks for the greater good of the defensive unit around them. His strength is widely considered to be playing against the run, and the run only — and heading into the 2021 season, players who only offer value on the defensive line in base defenses don’t offer, well, much perceived value at all.

Last season, Williams only played in about 33 percent of the Ravens’ defensive snaps, according to Pro Football Reference. He contributed 33 combined tackles, one quarterback hit and two tackles for loss. Those are not splashy numbers, and they certainly don’t harken thoughts of a high-impact inside presence worthy of a high-end contract. But Williams does provide very real value to the Ravens, particularly in their rush defense.

Consider last year, for instance. In the 13 games Williams played, the Ravens allowed 1,305 yards on 310 carries — splits of 4.2 yards per carry, and 100.4 yards per game. In the three games Williams missed, the team gave up 435 yards on 72 carries, or 6.0 yards per tote, and 145 yards a game. Sure, it’s a limited sample size, but I think everyone who has watched the Ravens play over the years can instantly see the difference in the team’s rush defense when “Big Baby” is not on the field.

No, he’s not impacting opponents’ offense all three downs, or pestering quarterbacks like Aaron Donald, Fletcher Cox, Kenny Clark, Chris Jones or… pick your disruptive interior presence. And that does impact his — here’s that word again — value. But for as long as the Ravens have been around, “value” has been a significant concept.

Williams had his salary voluntarily reduced this coming season to $6 million guaranteed. To put that in perspective, Aaron Donald will hit the Rams for $14.3 million against their cap after a restructure, Cox $15 million, $17.5 million for Clark, and Jones about $8.5 million after his own restructure. Would the Ravens and Williams be comfortable bringing him back for, say, $10 million for two years? Maybe $8 million?

Williams is kind of like the defensive version of a fullback in today’s NFL — possibly providing more impact to the Ravens’ schemes than many other teams in the league. Would that keep his bids from outside to a minimum? Is it a situation where he simply holds more value to the Ravens than other teams, improving their chances to keep him in the building?

Will I ever stop pestering you with questions? Well? Will I?

There isn’t a lot behind Williams as far as being able to make a simple decision to let him pursue other opportunities. Justin Ellis and Aaron Crawford are big bodies, but there isn’t a whole lot to go on to assume either one could slip easily into Williams’ ginormous shoes at the nose next year. Do you step out and sign a free agent who probably wouldn’t do as good a job as Williams? Hope for the draft to fall your way? Why am I asking you questions again?

Sure, the Ravens are playing more sub packages every year, and that reliance on a pure “nose” is maybe not as important. But we’ve seen Williams play a key role against run-heavy offenses, and we’ve seen teams take advantage of his absence by pounding the ball right up the middle when he isn’t around.

The Ravens need to plan for the future of the position, and they’ve historically done a nice job finding nose tackles. But I don’t see that guy on the roster yet to take Williams’ job, and I’d probably consider bringing him back on a reasonable one- or two-year contract if he’s interested while the team replenishes the line with some youth.

Earlier this year when asked about Williams, Eric DeCosta shared this:

“He’s a valued player on the team; it’s hard to find guys like him. He fits our mentality. He’s still a relatively … As a nose tackle, these guys can play for a long time. He plays hard. He plays [well]. He’s one of us. He’s a Raven through and through.”

Williams has proven to be a well-liked teammate who provides a tangible service at an undermanned position that has as DeCosta suggested, longevity. That makes extending him to a reasonable contract fairly sensible to me. Don’t you think?

Damn, I did it again.