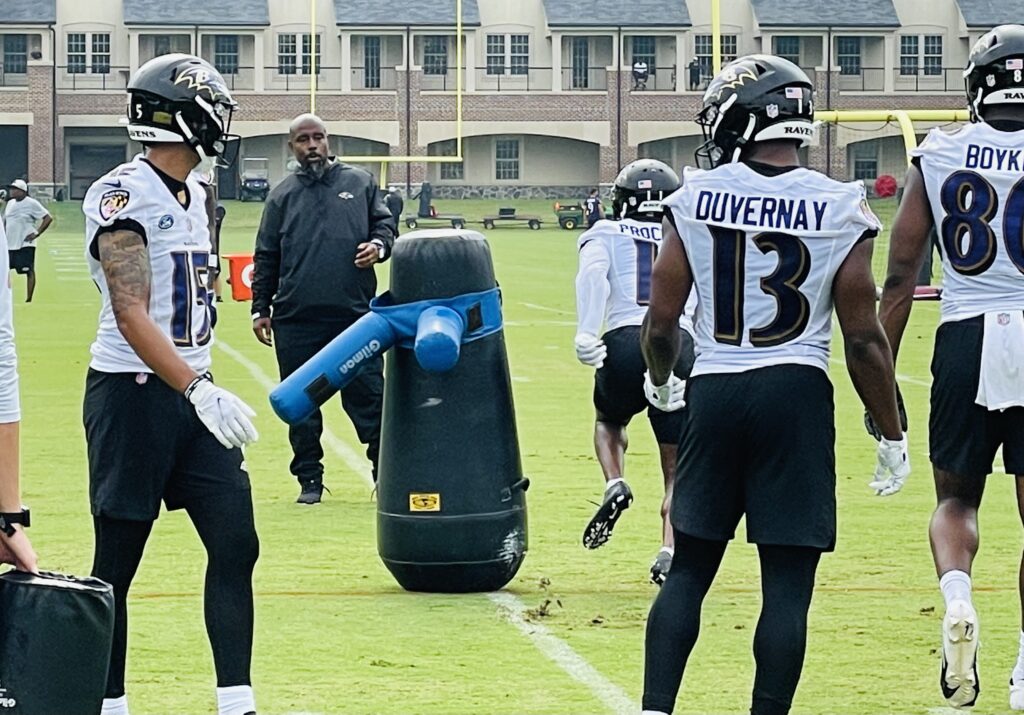 For the second consecutive day the Ravens donned their shells, shirts and shorts during this morning’s practice session. And just as they did on the first day of camp, the first 50 minutes were spent on individual drills. At 9:20 the team kicked off the competitive part of practice that included 11-on-11 and 7-on-7 scrimmaging.

Yesterday it was the offense with the upper hand. Today, the defense controlled the day although there were a few splash plays from their offensive teammates. Marcus Peters sat out the session, observing from the sidelines. He had a minor setback on Wednesday with a toe nail injury and word is he’ll be back out on the field tomorrow. Also missing from today’s practice were: Lamar Jackson, Gus Edwards, Nick Boyle, Jake Breeland, Otaro Alaka, Ronnie Stanley, Iman Marshall, Anthony Averett and Ja’Wuan James.

Marquise Brown who had a very good practice yesterday, participated in individual drills but sat out the scrimmaging sessions for precautionary reasons. Typically, such decisions involve some sort of soft tissue tweak. It would not be surprising to see Marquise sit out tomorrow. Each day he looks more and more worthy of the draft capital invested in him.

I spent the early part of practice watching Tee Martin and Keith Williams put the receiving corps through the paces. Both are extremely hands on, detail fanatics, continually staying on the group to refine their routes and be efficient with footwork while heavily emphasizing tactics to fight press coverage.

Both Trace McSorley and Tyler Huntley had off days but in their defense they didn’t get clean looks from the pocket. McSorley had a couple of passes batted (Campbell, Williams), one of which the 6’0” QB caught and advanced. Early during 11-on-11’s, Trace was flushed out of the pocket to his left. With nothing open along the left sideline, McSorley stopped, pivoted towards the right and threw the ball completely across the field at the line of scrimmage with his receiver standing outside of the numbers. Marlon Humphrey nearly came up with the pick six. It was a risky decision that would have resulted in no gain. Sometimes you just have to live for another play and cut your losses by just chucking it OOB. Later on, while running the 2 minute offense, McSorley threw an out to Rashod Bateman who read the play differently and ran a 9. It’s things like this that need to be cleaned up in practice and that’s why Lamar’s absence is so disappointing.

Of the two backup quarterbacks, Huntley had the better day. Early in 11-on-11’s, Huntley was forced to his right where he spotted Jaylon Moore running down the right sideline. Moore was bracketed by Davontae Harris and Anthony Levine who was closing in from his safety spot. The ball arrived before Levine resulting in a TD from 62 yards out. Towards the end of practice Huntley hit James Proche on a deep post for a score. Proche who had a very good outing, was fully extended when he made the catch and then tumbled into the end zone. Proche also made a nice over the shoulder catch for a score. Huntley later connected with Tylan Wallace who made an acrobatic catch of a pass down the right sideline resulting in a gain of 35 yards.

During some early warmups Proche made perhaps the best catch of the day although it didn’t count – a one-handed catch along the left sideline on a slightly overthrown ball. Unfortunately there wasn’t enough room for a successful toe-tap before going OOB…Moore flashed on occasion during OTA’s and looks like a solid practice squad candidate. However Tee Martin chastised the second year player after poor execution on one play when he seemingly quit on his route, making the throw vulnerable to a pick…Sammy Watkins had a would-be completion stripped from his hands by Nigel Warrior. It was more of a great play on the ball by a defender than it was the fault of Watkins. However, on the very next play, Warrior who is listed as a safety, lined up at corner opposite Watkins. Sammy torched the former Tennessee Volunteer, hauling in a nice toss from Huntley…Chris Westry is a long corner who stands a 6’4”. He picked off a deep pass from Huntley intended for Deon Cain. A few plays later Westry had a PD on a well-covered out route.

As noted earlier the quarterbacks were unable to set and throw with any degree of comfort and regularly there was no room for any of them to climb the pocket. Interior pressure from Calais Campbell, Justin Madubuike and Derek Wolfe was applied often. The edge defenders that were most impressive were Tyus Bowser, Odafe Oweh and Daelin Hayes. Each of the rookies registered two sacks. On one of Oweh’s sacks, he made Michael Schofield look silly. Thoughts of Linda Ronstadt’s song Blue Bayou came to mind…Chauncey Rivers applied a fair amount of pressure during his reps and had a tackle for loss on a running play. However, Rivers was no match for Ben Cleveland during line drills. I waited for Aerosmith’s “Rag Doll” to be teed up by the DJ on hand…Aaron Adeoye made a nice move to bluff an outside rush only to cross up left tackle Foster Sarell and take it inside for a clear path to Huntley.

The Ravens QB’s seemed to be under center much more today and that was a theme at times during OTA’s as well. The cynical among you are probably thinking it has something to do with Bradley Bozeman’s struggles yesterday but that’s not the case. Bozeman was flawless today with his snaps…Good to see Jimmy Smith running stride for stride with Watkins on a 9 route down the left sideline. The pass from McSorley was on target but Jimmy had tight coverage and batted the pass which was nearly picked off by the safety rolling over…As mentioned the Ravens defensive front seven brought heat but Jaylon Ferguson was not among the deliverers. 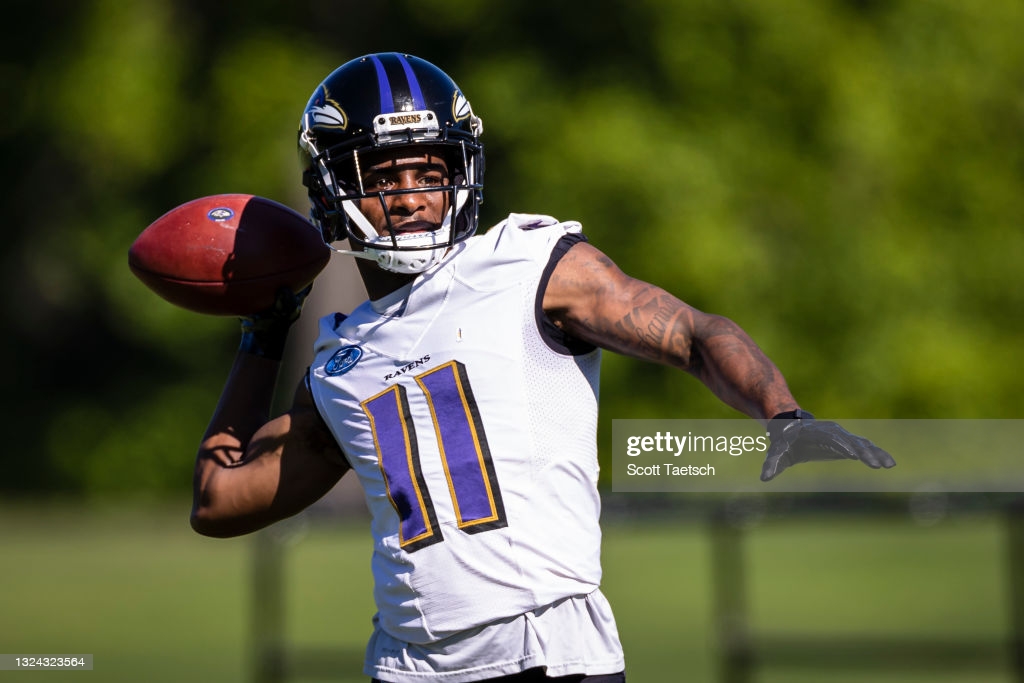