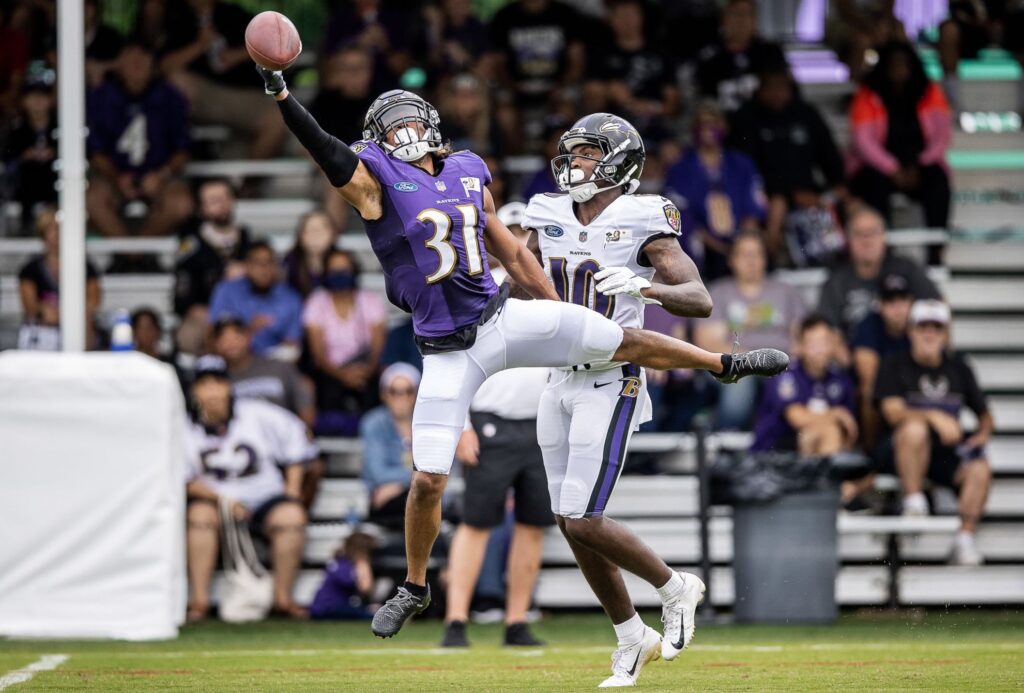 The Ravens have wrapped up Day 7 of Training Camp – the second consecutive day a fully padded practice. Once again, the defense ruled the day. Here are some early observations…

•TySon Williams laid the WOOD on Anthony Averrett 😳
•Huntley w/ 3 picks on 4 passes 😳 (one was a dead play, another Wolf got crushed by Khalil Dorsey & Joker grabbed it midair)
•Marlo & AA w/ the other picks
•Queen is FLYING

Does Trace McSorley favor his left? 🤔

something to watch for?

That’s it from @Ravens TC today. A few quick thoughts…

The #Ravens have announced that they’ve signed WR Michael Dereus from Georgetown. They signed Dereus in April of 2020 as a UDFA but ultimately released him. He looks to be nothing more than a camp body so as not to overwork the healthy receivers in camp.

On Zeitler’s foot injury, I watched the play during which I believe he sustained the injury. He was up against Madubuike in 1-on-1 drills & Justin bull-rushed Zeitler pushing him well into the backfield. Zeitler limped slightly afterwards. Looked like Mads stepped on KZ’s foot. pic.twitter.com/lQx6UASJOH

#Ravens OC Greg Roman said that Villanueva is making good progress at RT…On Bateman he sees potential on how the team can deploy him…Said that the repetitive process is invaluable for the reserves who are going up against an aggressive defense w/o Lamar and O-linemen.

Wink Martindale said that he’s pleased where the defense is after two days in pads, happy with the physicality…said that Ar’Darius Washington is coming on and should be fun to watch in the preseason…he said the team has room for his 97 1/2 sacks…has great hopes for Oweh.

Tavon Young said that his faith, teammates and family have helped him mentally to deal with the disappointment of two straight seasons cut short due to injury.