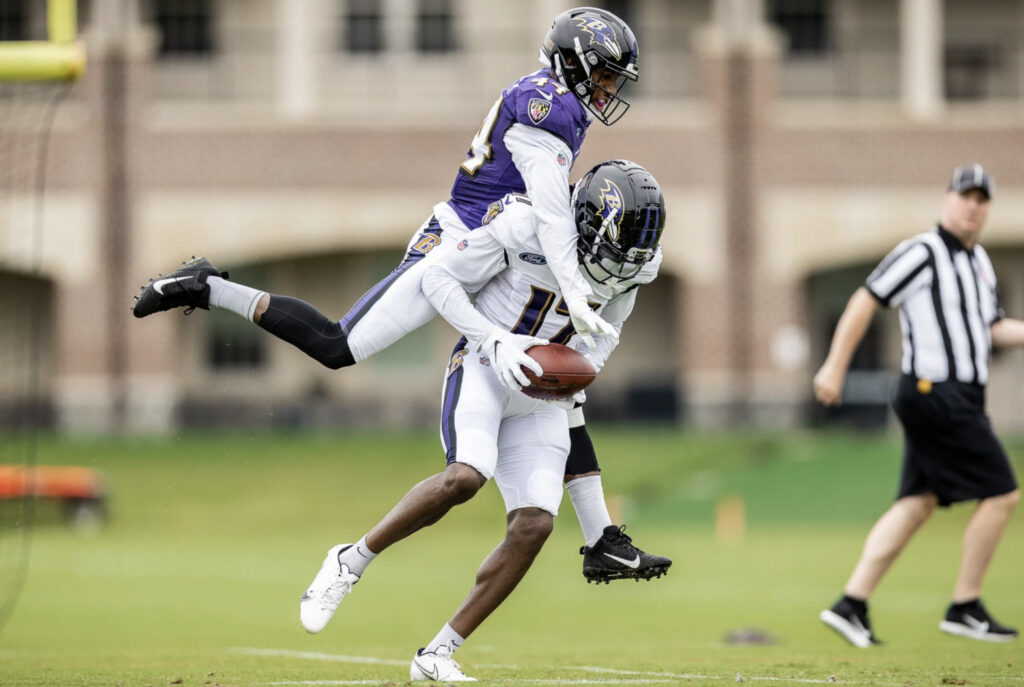 Walking onto the practice fields at 1 Winning Drive this morning, one question was muttered by so many fans and media members alike, that it almost felt like a loud whisper…

“Where is Lamar Jackson?”

Despite everyone’s high hopes to finally see the Ravens Quarterback on the field today, the team opted to keep Jackson out of practice for further testing, despite his being reinstated from the COVID-19 List (which was announced after practice today). One more day without Lamar isn’t truly the end of the world, and it sounds like Ravens fans will get their chance to see the 2019 MVP out on the field as early as tomorrow…a welcomed addition the Ravens offense that’s largely struggled since the pads came on earlier this week.

While the Ravens pass rush was kept largely at bay today, the Ravens secondary decided it was their turn to make life difficult for Tyler Huntley and Trace McSorley (rarely a Kenji Bahar sighting at this juncture).

If the past few practices are any indication, Marlon Humphrey isn’t going to light up the forced fumble stats again in ’21… simply because that requires allowing a completion first (or a newfound affinity for corner blitzes). Marlon had himself a pair of pass breakups on back-to-back plays today after a few back on Wednesday, and paired those PBUs with some outstanding coverage along the sidelines, where he refused to give up ground. It’s borderline crazy to suggest a star player like Humphrey could find yet another level to his game, but the way he’s covered in camp? Barring one phenomenal catch by Rashod Bateman in the end zone at the stadium practice, I’m not sure he’s allowed a catch? Maybe one or two total?

Ar’Darius Washington got in the PBU game as well, and continues to stack solid practices during camp. I’ll be honest, this is one of the kids that I’m most excited to watch in preseason games. Pressures… coverage… physical play… I genuinely think he stands a solid shot at a roster spot.

The biggest play of the day was Anthony Levine Sr. roping in the only interception on the day, on a Tyler Huntley pass attempt to Eli Wolf in the end zone. Huntley didn’t see CoCap sneaking in from the left while Wolf was running the crosser, and Levine came across with a clean pick a few steps ahead of the intended target.

Honestly, the only wideout to have sustained success in scrimmages today was Sammy Watkins, who pulled in damn near every pass headed his way. The one pass he didn’t catch?

Check out the Player of the Day below…

The third year corner out of Kentucky had himself quite a day today, to the point I have ’30’ written down nearly a half dozen times in my handy little notebook today. In one-on-one drills, Westry used all of his 6’5″ frame to get up and swat down a pair of deep passes along the sideline, and allowed just one catch in total. His biggest play of the day came lined up against Sammy Watkins during 11-on-11, where Westry stuck to the speedy Watkins like glue, stayed on his hip and used his long reach to bat down the intended pass that was otherwise, on the money.

It’s one thing if Westry was winning against other backend roster players, but to own that rep on Watkins is huge for his stock.

Westry is in his third year in the league, but spent 2019 on the IR (hammy) and the Cowboys Practice Squad in 2020 before signing a futures deal with the Ravens in January of ’21. Finally fully healthy, Westry has been solid thus far in Training Camp, and could certainly threaten to steal a roster spot from the oft-injured Iman Marshall.