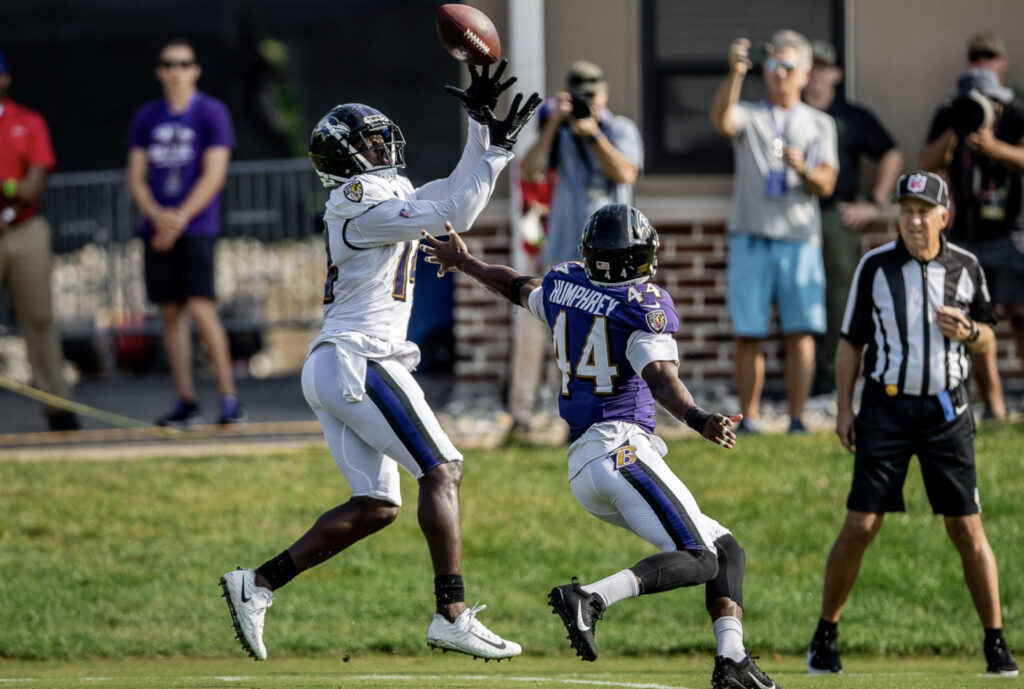 After yesterday’s scary moment when Rashod Bateman went down in a heap with what is now being declared a ‘soft tissue injury in his leg,’ anytime a player goes down, gets to his feet slowly, or even looks slightly off? You can sense the panic of the spectators at Training Camp.

As such, I dubbed today’s Training Camp session a ‘Get Up’ Practice.

Simply put, I didn’t care who stood out – good or bad – as long as everybody who went down got back up.

Naturally, the Ravens didn’t get away unscathed today, as Ben Cleveland left practice early, accounting for 22(!) Ravens absent from the field at that juncture; however, Cleveland didn’t appear to show any signs of injury – no gimping, limping, or grimacing from my vantage point – so perhaps just heat exhaustion? Cramping?

Otherwise, the Ravens had a relatively clean, albeit non-eventful, practice in the scorching heat of a mid-August morning. Here’s the best I could muster in terms of notable performances on the day:

— JP2 (James Proche II) once again had a standout performance, twice besting Marlon Humphrey in 1-on-1 drills, including a one-handed snag in the far corner of the end zone after a sweet little juke late in the route. In fact, the only thing I saw Proche miss today was a Gatorade bottle he tried to toss into the trash and came up short (he should’ve yelled ‘Kobe!’ on the fade… works every time). I know fans are panicked about Bateman’s extended absence, but you should all be feeling substantially better after hearing so much praise heaped on JP2 thus far. How concerning is Holly-Watkins-Proche in Week 1? Shouldn’t be any worry!

— Devin Gray once again stood out to me, snapping off a few routes and creating gobs of separation with his footwork. Gray is still a long shot for this roster, but I genuinely think his name will pop a few times this Saturday against the Saints in the Ravens first preseason game.

— The QB2 battle was pretty much a dud today. Both Tyler Huntley and Trace McSorley missed more than they hit, and much of it was of the airmail variety. I still attribute a bit of this to the revolving door of an O-Line putting defenders in the laps of the Ravens backup signal callers with frequency, but surely I hoped for more from these two. I expect each QB to get a half of the game come Saturday. Here’s to hoping somebody steps up…

— Chris Westry, once again, looks like a starting caliber corner in the NFL. I know it’s just camp, but the kid just gets it. He uses the perimeter to his advantage, uses his size and length, and although he can get bullied occasionally? It’s rare to see him more than a half-step off the receiver at any juncture.

— Mark Andrews rebounded today after several days of… concerning drops… catching everything thrown his way, barring one toss by McSorley about three feet short on an out route. Likewise, Josh Oliver continues to stack great practices.

— Defensively, the pressure was in the QBs collective faces all day. Pernell McPhee… Calais Campbell… safety blitzes…  Chris Smith got some action… absolutely relentless. Of course, the caveat is the O-Line woes – when the Ravens are without their starting LT… potential LG (Cleveland left)… C back after missing time with injury… RG… and RT? It’s going to be a bloodbath.

I also want to point out the brutal heat led to less scrimmaging (at least I assume so) and much more individual drill, half-tempo scrimmaging, and Special Teams practice. Quite frankly, with the heat expected to intensify tomorrow, coupled with the litany of players out right now, and a game around the corner on Saturday? I expect a similar day tomorrow from One Winning Drive.

Another ‘Get Up’ practice is all I care about!