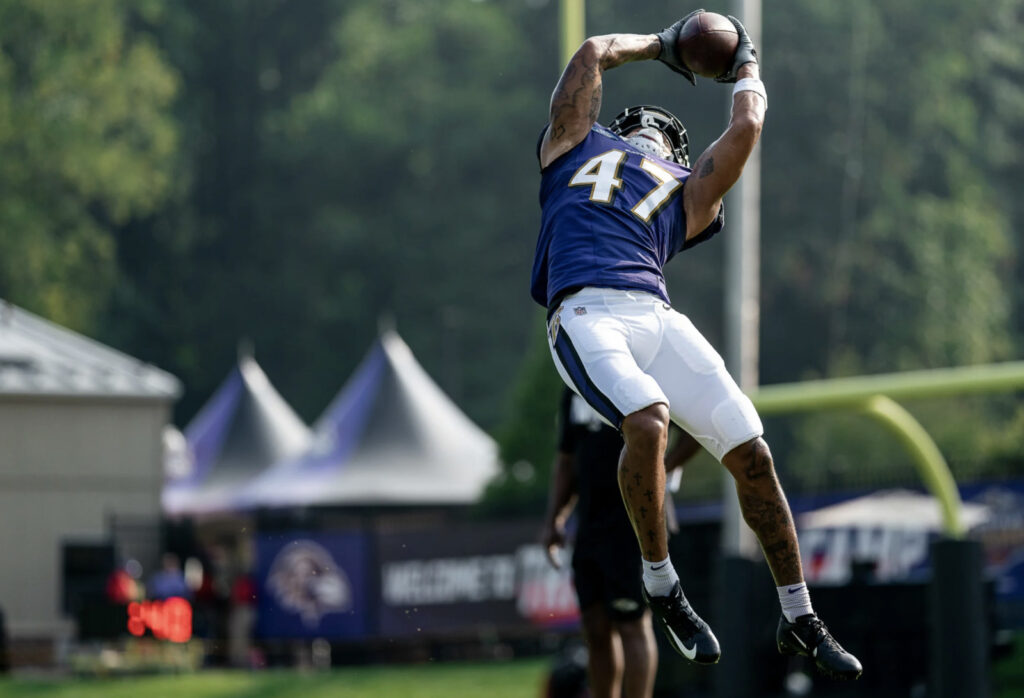 Sometimes, you simply forget how absolutely mammoth NFL players can be.

This sentiment was no more apparent than this morning, as the horn blew to signal to players that their second scrimmage session was about to begin, and the Ravens defensive unit jogged over to the near sidelines. No more than six feet away from where I stood, the likes of Calais Campbell, Justin Madubuike, Derek Wolfe, Odafe Oweh, Daelin Hayes and Justin Houston absolutely towered over the fans and media alike. They would’ve cast one helluva collective shadow on the sidelines, had the sun not been too afraid of them to show itself…

Once I got my tangents in check, a ‘normal’ thought dawned on me… this pass rush is honestly one of the most intimidating that I can recall in recent history for this Ravens franchise. It’s such a perfect mix of veteran presence (Houston, Campbell), young proven talent (Bowser), and kids with stud potential (Madubuike, Oweh, Hayes) and it finally feels like this unit will be able to beat opponents a few different ways, notably in one-on-one situations where they’ve struggled in recent years.

They’ll all talk about the Browns and Steelers pass rush in the AFC North heading into the season, but wait until they get eyes on this squad…

As for the rest of practice today, we were treated to nearly an hour of Special Teams play (necessary, not noteworthy), followed by some seven-on-seven and full scrimmaging that features highlight reel catch after highlight reel catch (noteworthy for sure). Here’s a few of the splashy plays I’ve jotted down today:

Considering at the one hour mark I mumbled “what the heck will I have to write about today?” I’d say the offensive spectacle to follow surely did it’s best to help me out.

Despite the great showing by the playmakers today, there were undoubtedly a few other notable takeaways. Here’s the best of the rest.

Player of the Day: Tylan Wallace

Wallace has been relatively quiet in camp thus far, but today was easily his best showing. Wallace caught every ball thrown his way, with the exception of a pass broken up by Anthony Averett that was just a little bit more contact than both Wallace and the coaches expected in shells (looked like AA even felt bad on that one, offering a hand to Wallace on the turf). Wallace showed off his route running, acceleration, soft hands, and ability to extend to reel in a catch. Solid showing today by the rookie out of Oklahoma State.