The Miami game was the Ravens’ worst performance on offense this season. It was their lowest regular-season point total of the Lamar era; their only lower score in the past four regular seasons was the nine points they put up at Cleveland in 2018 game five, when Joe Flacco was the starter. Worse was the playoff loss to Buffalo this past season, when they were held to three points. But at least that game was played under adverse conditions: the wind was so bad that neither offense could do anything. The Bills only put up 10 on offense. Josh Allen was held under 5.6 yards-per-attempt. Justin Tucker missed two field goals! Let me repeat that JUSTIN TUCKER missed two field goals. So did the Bills kicker. It was a legit problem.

Thursday night was different. It wasn’t the elements, it was the performance. And the scheming, and the play-calling, and the situational awareness. Ugly.

One of the persistent criticisms of the Lamar/Roman Ravens offense the last few years is that they don’t handle the blitz well schematically. JT O’Sullivan of the QB School pointed out two years ago, during Lamar’s MVP season, that he didn’t seem to know when he was “hot” and the Ravens weren’t giving him a hot read/checkdown in blitz situations. O’Sullivan conceded that in many situations, “Lamar is the checkdown,” because of his elite escapability and playmaking. The Ravens could leave a free rusher unaccounted for, and Lamar could still make the big play. But that approach has had diminishing returns since 2019. Defenders are more ready to react to Lamar’s runs.

Ted Nguyen of The Atlantic has a great breakdown of what the Dolphins did schematically to shut down the Ravens:

How the Dolphins created free rushers without actually bringing more than the Ravens could block. https://t.co/q1gaAnGLWe

The plan included “read blitzes” which involve the entire defense, and what Nguyen calls “key blitzes,” which I think of as “green dog blitzes,” where a defender blitzes if his man stays in to pass block. We should note that the Dolphins were able to execute some of this scheme because they are such good tacklers on the back end. In particular, Xavien Howard was tremendous for them on Thursday.

But it wasn’t just a matter of the Phins coming up with an unstoppable scheme.  The Ravens adjustments were poor to non-existent. Here’s an example of just how bad it was:

I have no idea what the hell is going on here. The five eligible receivers are *ALL* wide open (giving a little benefit of the doubt that the RB in the left flat will beat the linebacker on the wheel route). The pocket is there. A short dump-off to either of the wide guys should lead to an easy 10-yard gain with the inside guys blocking. Getting sacked here is a preposterous outcome. But you have to be ready & willing to play the Quick Game. There’s no receiver looking for the ball, and there doesn’t seem to be any short route. Are the two wide guys running mesh? Even though the defenders are all laying off? What is going on??

Here’s a similar play that was disrupted by a classic zone blitz, with defensive linemen dropping to take away the short area:

I think as fans it’s easy to jump all over the coaching and play-calling. Fire the coordinator! But there are execution issues here too.  Sight adjustments not being made; quick throws not taken. In 2019 Lamar was great at the Quick Game. In the past two seasons, not so much. It’s a serious deficit. And I don’t think all of it falls on the coaching, at all.

The Ravens have a huge, glaring problem when defenses show Cover 0 before the snap.

It’s also worth noting that the Ravens offense probably isn’t as bad as it looked. If I’ve done the query right, road teams have a .431 record on Thursday nights. Teams are a little sluggish compared to how they normally play; that includes the mental ability to make adjustments. If the home team springs a schematic surprise on Thursday night, it’s easy to see the road team struggling to counter it effectively. I mean, struggling more than they do on Sundays. The Ravens offense has shown a good ability to adjust in the second half so far this season. A bad showing on the road Thursday doesn’t mean that the “adjustment” ability is gone.

So, did any receiver have a good day?  Well actually yes.

Rashod Bateman had an excellent day.  I’m stunned by how good he is, especially with his rookie training camp cut short by injury. He plays like a veteran: crafty. But quick.

Mark Andrews was OK on the day, but not his usual Pro Bowl level.

Devin Duvernay was just OK as well.  The yardage isn’t impressive, but you can’t criticize a receiver when he catches everything thrown to him. 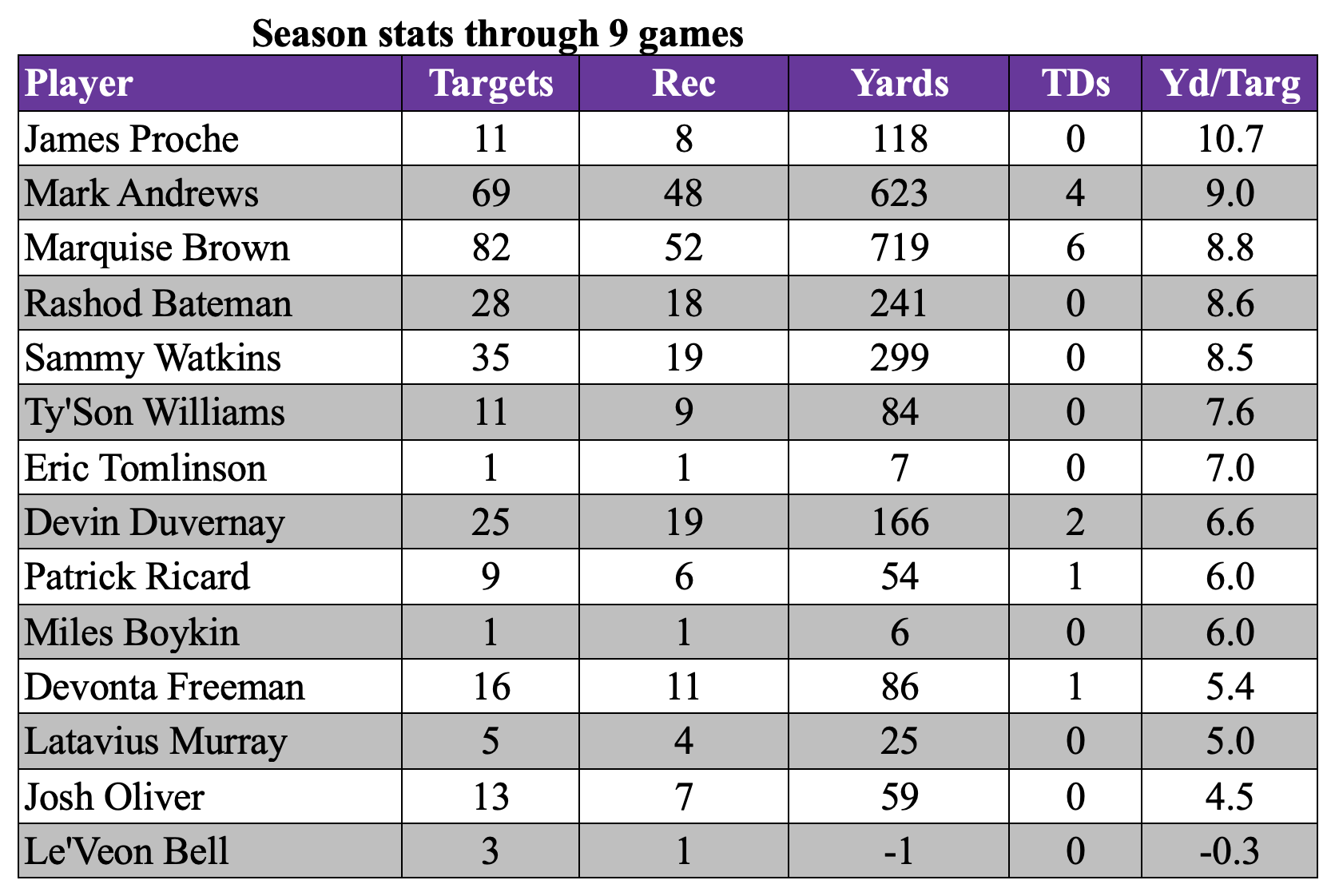 Marquise has fallen just out of the league’s top ten in receiving yards, at 11th. He’s still on pace for about 1300 yards.

Andrews is on pace for about 1100 yards over 16 games. He’s still second among NFL tight ends in receiving yards. He’s fallen a little off Travis Kelce’s pace, but Kelce’s team has played an extra game (the Chiefs haven’t had their bye yet).

Bateman’s pace over four games is impressive. His yards-per-game projects to about 960 yards over a 16-game season. He’s getting the volume because Lamar clicks with him, which is important all by itself; but also, he gets open and makes plays.  Exciting rookie. I really liked him as a WR prospect in the draft, but he’s even better than I thought he’d be. Frankly I think he looks like a more complete player than Marquise Brown looked (to me) as a rookie. But of course Marquise had the foot injury, so probably not a fair comparison.

Lamar is in the NFL’s Top Ten for passing yards, yards-per-game and yards-per-target.

Next up: a trip to Chicago to visit Justin Fields and the Monsters of the Midway!