Huntley Dinked, Dunked…& Found Watkins When it Mattered Most

It’s good to get a win in a road game with your backup QB. It reinforces how resilient these Ravens have been this season. And Tyler Huntley showed a lot of poise and heart in the game.

I want to take a minute to use Huntley’s performance as a way to talk about the difference between completion percentage and accuracy. It’s probably going to sound like I’m slamming Huntley, and I really don’t mean that. I just want to amplify the differences between him and Lamar Jackson, as passers. Hunltey completed 72% of his passes against Da Bears. But his passer rating for the game – and I’m going to remove that fluke INT from his stats, to be more fair to him – was only 87.6. No touchdowns, and his yards-per-attempt were low.

We usually think “accuracy” is described by completion percentage. Lamar is often described as “inaccurate” because his completion percentage (comp%) is lower than many of the top QBs. Huntley will be described as “accurate” after completing 72% of his passes. But look at this game. Huntley had a high comp% with a low yards-per because he was dinking & dunking. Some passes he completed were bad decisions, with the receiver in a position to lose yards rather than gain them. During the broadcast, Tony Romo pointed out a play where Huntley completed a little dink toward the sideline, when Mark Andrews was wide open down the field for a bigger gain. A mistake of inexperience.

Did it really look to you as if Huntley was all that accurate? Andrews made a one-handed circus catch on one of the receptions.  On one swing pass to the left, Huntley’s pass pulled the running back backwards, preventing him from gaining any yards-after-catch. I’m not saying everything was bad – not at all! – but the high comp% was a result of easy passes, not of great ball placement.

Contrast that with Lamar. He has a higher yards-per-attempt because he challenges defenses. Lamar leads the league in “air yards per completed pass,” and he’s third in “intended air yards per attempt,” behind Justin Fields & Russ Wilson.

The longer attempts lead to a lower comp%. But we’ve seen great ball placement on intermediate throws from Lamar: feathering it between defenders, putting it where only his guy has a chance at it, etc. I would argue that Lamar at 64% has shown greater “accuracy” than Huntley showed Sunday at 72%. Again, I’m *NOT* trying to hammer the guy after his first career start. Huntley did a great job running the offense, and he was a hero in crunch time. He really came through for the team. There’s promising traits to build on; he’ll get better. I’m just trying to point out something about football statistics. A higher completion percentage is NOT the same thing as better accuracy or ball placement.

A hidden component of Huntley’s day was that he spread the ball around, as there were five different receivers with four or more targets. That’s great from an inexperienced QB. He really did do a fine job managing the offense.

Great to see Sammy Watkins back in action!  He’s such an asset.

I’d name Andrews as the Most Valuable Receiver for the game, despite Watkins’ higher efficiency. Andrews was all the Ravens had on offense early on.

Gotta respect Devonta Freeman catching everything thrown to him. I have to make a mental note: I know that I’ve said several times that running backs tend to have lower yards-per-target than wide receivers. But what exactly is the average YPT for running backs? I’ll try to take a look in the coming week.

Nick Boyle’s first target of the season. Welcome back, Nick! 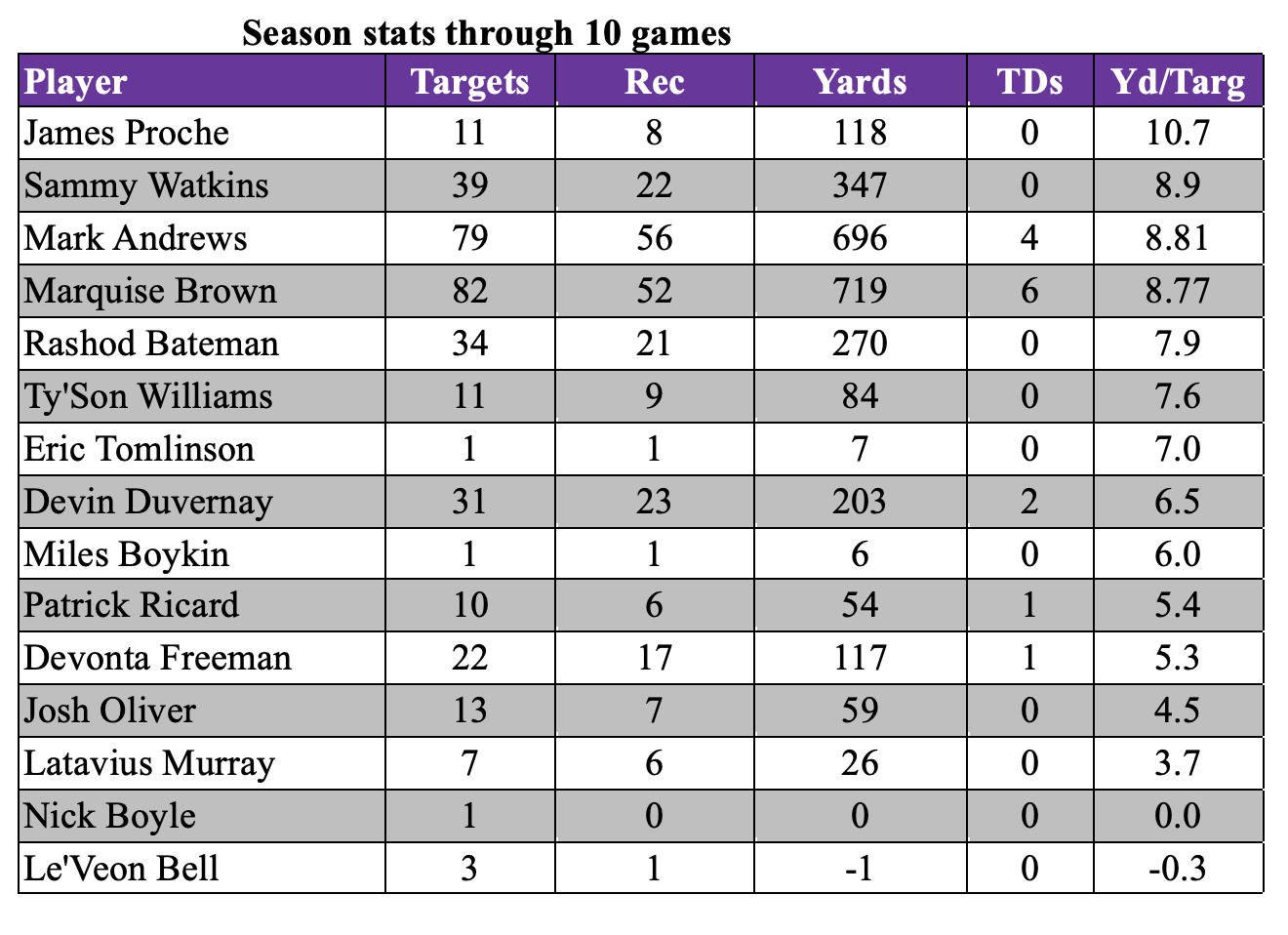 Watkins, Andrews & Marquise Brown all neck-&-neck in productivity, and Bateman just a hair behind them. The Ravens have a clear Big Four in their passing offense. That’s exciting.

Andrews is still second in the league in Tight End receiving yards, about 125 behind Travis Kelce. Andrews could cut into that lead, if the Chiefs ever get a bye week (it’s this week). I think Andrews is still on track for a spot at the Pro Bowl.

With the missed game, Lamar has fallen out of the NFL’s Top Ten for passing yards, though he’s still in the Top Ten in yards-per-game and yards-per-target. Hopefully he’ll come back with a vengeance next week.

Next up: The fun & games are over. Now things get real. Nick Chubb, Myles Garrett and the Brownies come to Baltimore for Sunday Night Football.