The Rams will be hosting the Bengals for Super Bowl LVI, the second straight year a participant is the actual home team in the biggest game of the year, which is supposed to be played at a neutral site. RSR staff lay down our final predictions of the year right here: 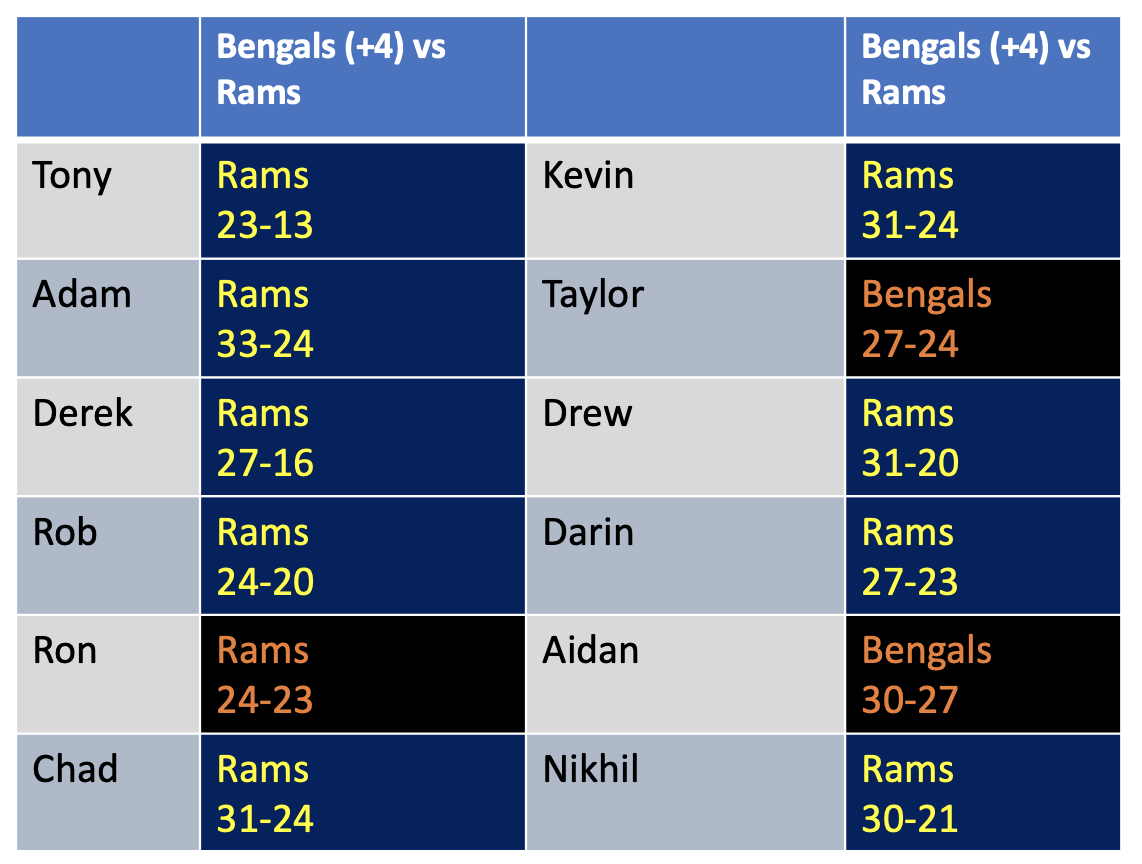 (Ron picked the Rams to win but Bengals to cover, which is why his block is that color)

Here are the updated standings (last week’s score in parenthesis):

This week we will give four points for the correct winner, eight for the winner against the spread, and five for a perfect score prediction.

Assorted thoughts on some predictions here:

Just like the Tampa defensive front controlled the Chiefs offensive line and was THE difference in the game in Super Bowl 55, the Rams front four will dominate the Bengals offensive front and make things difficult for Joe Burrow.

Rams get out to an early lead, and “try” to give it away with a second-half turnover and conservative play-calling. But a scary Los Angeles defensive front does enough to keep Joe Burrow from doing serious downfield damage and a Bengals comeback falls short.

I’m with Tony on this one that O-line concerns from Cincy are going to rear their ugly head and come back to bite the Bengals. If you give up nine sacks against the Titans front and have to rely on three picks to claw your way back into it, the prospect of facing Aaron Donald and a resurgent Von Miller up front looks grim. Cincy’s offense still has plenty of firepower to stretch the field, but I think they lose the battle in the trenches and it decides the game.

I picked against Joe Burrow in the AFCCG and told myself if he won I would never do it again. Geaux Tigers.

Tight game that ends with yet another McPherson GW.

To go along with the theme, Aaron Donald is just too much for the Bengals’ OL and wreaks havoc all night winning MVP along the way.

I expect the Bengals to counter the Rams D-Line pressures with a quick passing game and utilizing Mixon heavily as well… alas, I expect the Rams to get Burrow into 3rd & long situations where he’ll turn Chase targets into Ramsey picks twice. Give the Rams 5 sacks & 2 Turnovers in this game.

Those turnovers will be a huge key here, and the Rams will capitalize on a few short field situations that’ll seal the deal.

The Bengals will use a quick passing game to some success, but Aaron Donald and Von Miller are just a notch above anything the Bengals offensive line has faced this postseason, and Jalen Ramsay is probably Ja’Marr Chase’s toughest playoff matchup as well. The Rams make the most of their possessions and the Bengals can’t, and that ends up being the difference in the game.