The Ravens and Positional Value

Sports Illustrated’s Conor Orr wrote a great piece the other day, about how the Ravens are building the value of their roster:

Here’s How the Ravens Are Fleecing the NFL Again

Baltimore is focused on major talents at non-premium positions, and the strategy has the team set up to avoid bidding wars and stay in contention.

His general take is that the Ravens are using “Moneyball”-esque theory to zig when the rest of the league zags, by finding great players at “non-premium” positions.  In the salary cap era, you win by getting more bang for the buck; more wins-per-dollar than the other team.  More value.

If the Ravens can get 1300 yards and 9 receiving touchdowns from a Tight End, then they can stay out of bidding wars for free-agent wide-receivers.  That gives them more cap money to spend elsewhere, and STILL gives defenses something to draw coverage attention away from #1 Wide Receiver Rashod Bateman.

I don’t want to steal Orr’s thunder.  If you have SI, his piece is well worth a read.  (Though I would remind Orr that Terrell Suggs is one of the greatest players in modern Ravens history.)

I do want to comment a little on what the rest of the league is doing now, and how it compares to the way the Ravens have typically done business.

Ozzie was old-school in certain ways, and that included placing a priority on “premium” positions.  If you look at the Ravens three first rounds after the 5-11 debacle of 2015, Ozzie went Left Tackle, Corner, and Quarterback (and Hayden Hurst).  That’s Team-Building 101: Al Davis, John Madden, Joe Gibbs and Bill Parcells would all have approved.  Those were the three cornerstone positions, according to the pre-analytics view of positional value.

I think what’s happened in the last two seasons, is the league has gone overboard on a new-fangled analytics-driven view of premium positions.  Everyone’s trying to be the smart guy and leverage the latest-&-greatest insights from the data science revolution.  The league is acting as if the most recent research says that the only non-QB positions that matter are WR and pass-rusher.

First, with only eleven guys on the field, there’s a limit to how unimportant any position can be.  Every job is important; else why have it?  And any weak link can be exploited.  To underscore that point, let’s poke two very sore spots for Ravens fans: the playoff losses in 2014 and 2018.

Baltimore’s loss to the Patriots in the 2014 Divisional Round of the playoffs was the eligible/ineligible game, in case you’ve blissfully blocked it out.  One of the features of that game was Tom Brady relentlessly picking on one player in the Ravens secondary, who he clearly felt was the weak link.  I don’t want to pile on the guy unnecessarily here.  He was an undrafted free-agent who was a late-season injury replacement for the Ravens, and he played his guts out.  He was a key part of the Ravens playoff push that season.  But that playoff game was his 5th career start, Tom Brady is a ruthless bastard, and those Patriots were on their way to their fourth Super Bowl title.  Our guy had a bad game.  You can read more specifics here.

The Ravens loss to the Chargers in the 2018 Wild Card Round was defined by the Chargers exploiting a weak point in the Ravens pass protection.  There is no theory of “positional value” that puts Left Guard or Center high on the list.  But the Chargers ate Bradley Bozeman‘s lunch, and Matt Skura didn’t fare any better.  They exploited the Ravens left A-gap just as ruthlessly as Tom Brady picked on the weak link that he saw.  Melvin Ingram, Joey Bosa & Justin Jones were in Lamar Jackson‘s lap all day.  Lamar was sacked seven times, and he had more fumbles (not lost) than TD passes.  Rough game; though his 4th quarter near-comeback was a shining bright spot that hinted at greater things to come.

The point is, positions are “non-premium” only until suddenly they are critically important.  You just can’t have an obvious weak link.

We fans and analysts talk a lot about whether teams have “depth”.  But one thing that “only” good teams have is “breadth”.  Rather than being very strong at some positions and weak at others, good teams tend to be pretty good at every position group.  Without glaring weaknesses.  Philosophically, the Ravens have always focused on fielding a “complete” team.  That has annoyed us fans sometimes, when we’ve wanted them to stack Wide Receiver talent.  But the Ravens have always insisted on also being pretty good on the O-line, and pretty good at coverage, and pretty good at rushing the passer, and pretty good on special teams, etc.  You have to play the whole game.  And you can’t give Tom Brady, or Joey Bosa & Melvin Ingram, obvious weak points to attack.

While we’re on a roll – I mean hell, this is Baltimore right? – kicker isn’t a “premium position”, until Justin Tucker is winning a game for you with an NFL-record 66-yard field goal at the buzzer.  We’ve seen one or two games in recent seasons where the presence of Justin Tucker on the Ravens sideline has influenced the strategy of the opposing coach, i.e. they couldn’t just play for a tie or a 1 or 2-point lead with 30 seconds on the clock.

Great players impact the game beyond what their position “should” do.  If a player has a chance to be great, then you would be stupid to pass him up due to preconceived ideas of positional value.  (But still, don’t draft a kicker in the first round, even if he’s Justin Tucker.)

For the record, I don’t think the Ravens look at it as “building around great players at non-premium positions”.  I think they just look at it as, getting the best players they can.  For example, I’m sure they would’ve been happy to come away from the first round with Garrett Wilson at #14 (he went 10th), or maybe Trent McDuffie at #25 (he went 21st).  Instead they got the players they got.  And both of them have a chance to be great.

Kyle Hamilton is comped to Derwin James and Sean Taylor.  Today’s era of “position-less defense” makes high-impact defenders like them more valuable than ever.  Here’s a pre-draft scouting write-up of Hamilton to get you hyped about him: LINK

Tyler Linderbaum’s comp on his NFL.com prospect profile is Jason Kelce, who is a 4-time All-Pro and 3-additional-time Pro Bowler.  A Center like that ties together your whole O-line.  Center isn’t a “premium position”, until suddenly Lamar has a pocket he can step up into, or JK Dobbins has a guy out in front of him on a screen. 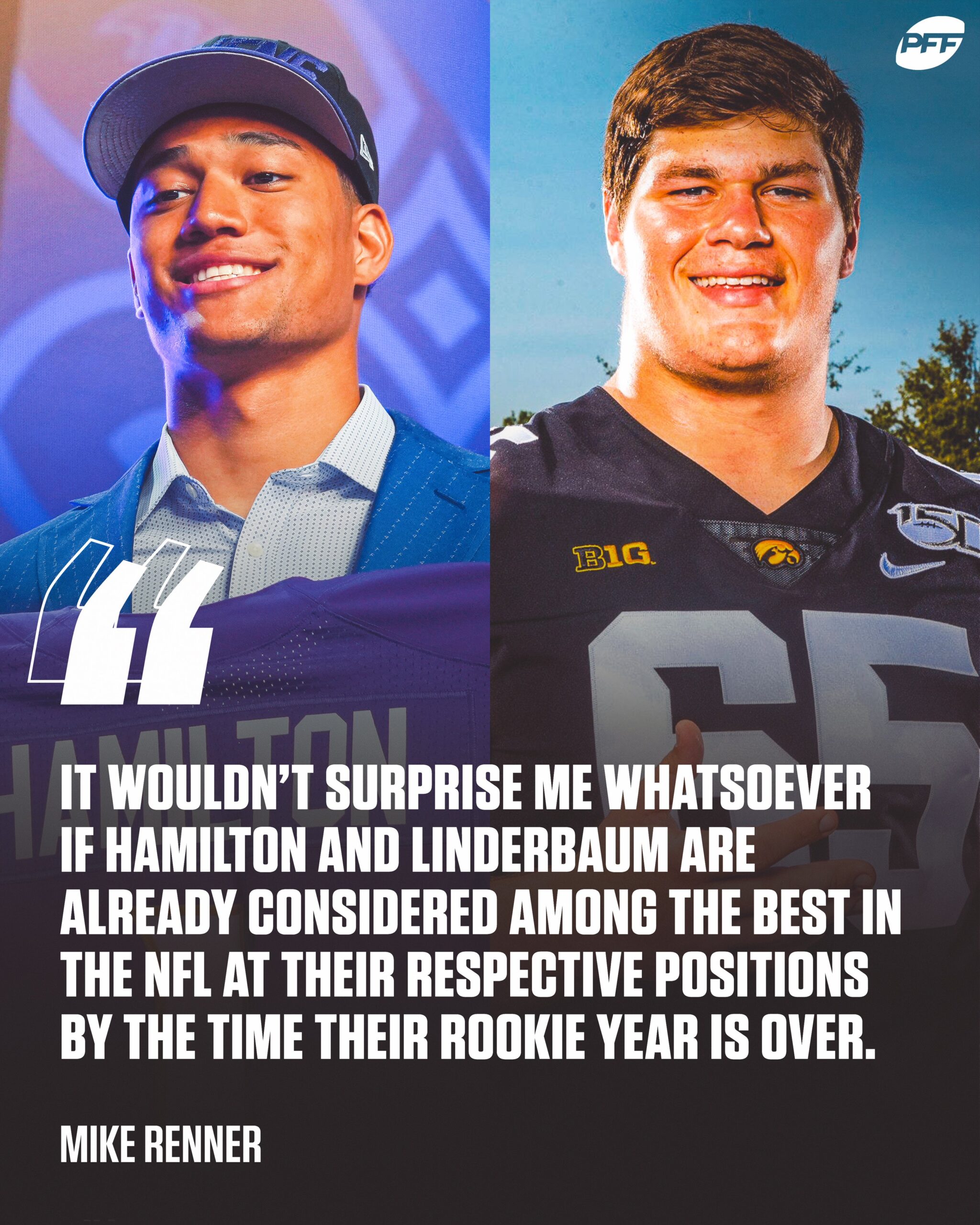 If you have The Athletic, here’s a pre-draft profile of Linderbaum to get you hyped about him:

“I was teasing Tyler’s dad,” Kirk Ferentz said, “I said he probably rescued somebody out of like a burning house or something like that on the way over to [drop off the donation check at] the children’s hospital. That’s the kind of guy he is.”

What differentiated them from other teams this year was not letting the concept of “positional value” blind them to the great (or potentially great) players that fell to them.  Don’t overthink it: take the great player.

Great players impact the game no matter where they’re positioned.