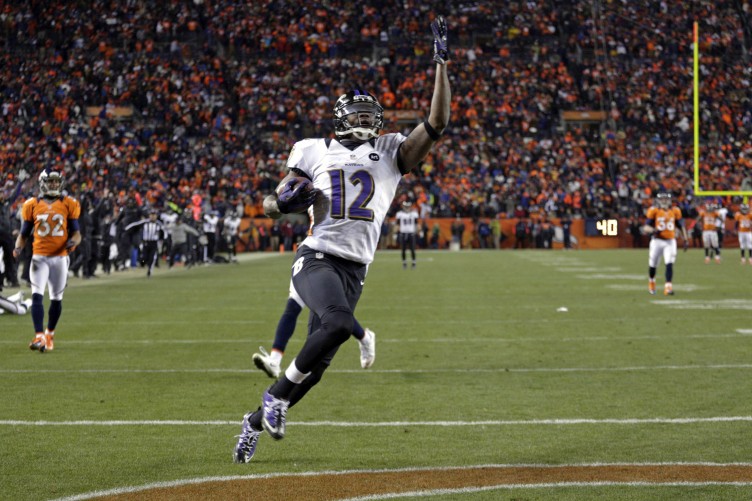 Last week we ventured down memory lane to relive the 10 Greatest Moments in Ravens history at M&T Bank Stadium. This week we’ll continue our journey by reminiscing about the 10 Greatest Moments in Ravens history on the road. Given that most of the team’s postseason appearances took place outside of Baltimore, it’s only natural that this list is even more compelling than the accomplishments down at Camden Yards.

October 3, 2010: Joe Flacco hits T.J. Houshmandzadeh with an 18-yard scoring strike with 32 seconds to go in Pittsburgh to beat the Steelers 17-14. VIDEO

December 20, 2008: Coming off a 5-11 season in 2007, the Ravens were hand-picked by Jerry Jones and the league to close out the final game at Texas Stadium. The host Cowboys were expected to win but rookie QB Joe Flacco and two running backs named McGahee and McClain had other plans in store as the Ravens went on to win 33-24. You have to love the dismay in Deion Sanders voice: VIDEO

December 13, 2010: The Ravens traveled to Houston to face the Texans and enjoyed a 28-7 halftime lead after David Reed returned the opening kickoff in the second half 103 yards for a score. But then the tides turned drastically as the Texans, led by Matt Schaub, reeled off 21 unanswered points on 60 second-half plays that ate up 21:24 of game clock. The Ravens defense was exhausted as the game went into overtime. Fortunately, they won the coin toss and took the ball. The game ended on a Josh Wilson walk-off pick-6: VIDEO

Josh Wilson, right, celebrates after intercepting a pass for a touchdown in overtime against the Houston Texans at Reliant Stadium in Houston, Texas, Monday, December 13, 2010. (Lloyd Fox/Baltimore Sun/MCT)

Down 31-26, the red-hot Philip Rivers faced a 4th-and-2 from the Ravens 15-yard line with 37 seconds left in the game. The Ravens looked to be on their heels and had no answer for Rivers’ darts down the field. With a timeout to burn the Chargers tried to surprise the Ravens and decided to run it with Darren Sproles. Ray Lewis was not surprised.

9. The Drive by Joe Flacco

Trailing 20-16 with 2:24 remaining at Heinz Field, the Ravens started a drive from their own 8-yard line. Thirteen plays, 7 completions and 2:16 later, Joe Flacco hit Torrey Smith for a 26-yard score on a 3rd-and-10 to take a 23-20 lead after the PAT. This is still Flacco’s best engineered scoring drive in his career and he did it on the national stage of Sunday Night Football.

The Ravens traveled to Miami to face the Dolphins in a Wild Card playoff game, their first since the heartbreaking loss to the Colts at M&T to end the promising 2006 season. The Ravens offense was sluggish and the game was knotted at 3 with 2:51 remaining in the first half and the game tied at 3. The Dolphins faced a 3rd-and-8 from their own 19. The game’s first touchdown was about to take place.

Four seconds into the game Joe Flacco handed the ball to Ray Rice at the Ravens own 17-yard line. By the 14:43 mark of the first quarter the Ravens had taken a 7-0 lead. The 83-yard TD run set the tone for the game as the Ravens controlled the line of scrimmage on both sides of the football. Joe Flacco was just 4 of 10 on the day for 34 yards and 1 interception, amounting to a passer rating of 10.0. Despite Flacco’s woeful game the Ravens still managed to beat the Patriots in Foxboro by the score of 33-14 – and it wasn’t even that close as they menaced Brady all afternoon, sacking him 3 times, and intercepting him 3 times. But it was that very first play, the game’s opening moment, that set the tone.

The (8-2) Ravens traveled to San Diego to take on the (4-6) Chargers as 1-point favorites. The Ravens trailed 13-3 with 7:51 left in the game after a 30-yard field goal by Nick Novak. During the ensuing drive, Joe Flacco went 7 for 8 for 76 yards capped off by a 4-yard scoring strike to Dennis Pitta. The Ravens got the ball back with 3:09 at their own 40 trailing 13-10. They advanced it to the Chargers 44 with 2:26 to go and then things fell apart. Three plays later they faced a fourth-and-29 from their own 37 with 1:59 to play. Things looked bleak. Things looked even bleaker when Flacco inexplicably checked down to Ray Rice near the line of scrimmage.

But Rice weaved around defenders and with an assist from Anquan Boldin who delivered a crushing block on Eric Weddle, he successfully converted the play for a new set of downs. The play helped set up a Justin Tucker field goal, sending the game into overtime and eventually won by the Ravens 16-13.

The Ravens would go on to lose three in a row to drop to (9-5). If not for this conversion, it’s possible that the Super Bowl XLVII win may never have happened.

The first quarter between the teams was scoreless. The Ravens had 50 net yards of offense, the Raiders 1 — ONE! At the 12:35 mark of the second quarter the Ravens took over at their own 12 following a Shane Lechler punt. Two plays later they face a third-and-18 from their own 4. Clearly this was going to be a low scoring game and the battle for field position would be crucial to success. The Ravens had to create some comfort space for punter Kyle Richardson. So, the Ravens dialed up their most reliable playmaker during these playoffs, Shannon Sharpe.

Sharpe caught a slant short of the sticks but slipped past the initial defender and then picked up a key block from Brandon Stokley. Ninety-six yards and a PAT later the Ravens held a 7-0 lead – a lead that felt like much more given the way the defense was manhandling the Raiders.

At the 14:56 mark of the 4th quarter the Ravens took a 21-13 lead on a 3-yard pass from Flacco to Boldin. Things look favorable and a second Super Bowl berth possible. But an 8-point lead was hardly enough to feel comfortable against the great Tom Brady.

On the ensuing possession, Patriots RB Stevan Ridley fumbled and the Ravens took over on New England’s 47. Four plays later, Flacco and Boldin connected again to put the Ravens up 28-13. It was then, at that moment, that a trip to New Orleans to take on the 49ers in Super Bowl XLVII was a near certainty.

With the game tied at 10 the Titans set up for a 37-yard field goal attempt to take the lead with 12:25 left in the game. The Al Del Greco attempt was blocked by Keith Washington and caught in air by Anthony Mitchell at the 10-yard line. Mitchell returned the blocked kick 90 yards to take a 17-10 lead following the Matt Stover PAT.

Following the Mitchell return, the two teams exchanged punts leaving the Titans starting a drive from their own 25 with 9:05 to go in the game. Two consecutive completions to Derrick Mason had the Titans on the Ravens 49-yard line. Following a 1-yard run by Eddie George and a false start by McNair, the Titans faced a 2nd-and-14 at their own 47. It was then that the NFL Defensive Player of the Year, Ray Lewis, stole an errant pass away from George and for all intents and purposes, made the Ravens first appearance in the AFC Championship Game a near certainty.

We all sensed it was over. The Ravens made a good run at it, nearly defeating the 9-point favorite Broncos and advancing to the AFC Championship. CBS was going to get the game they really wanted – Peyton Manning v. Tom Brady. We watched as the seconds ticked away – only 41 remained and the Ravens were out of timeouts facing a 3rd-and-3 at their own 30. They needed a miracle – and they got one.

Everyone in Baltimore went nuts!

We hosted a party for the game and when Jacoby Jones scored we celebrated, many of us rhetorically asking with delight, “Are you f***ing kidding me?”

Only the context was different.

Which was the greatest moment on the road in Ravens history?

Special thanks to my friends at Ravens Nest 14…