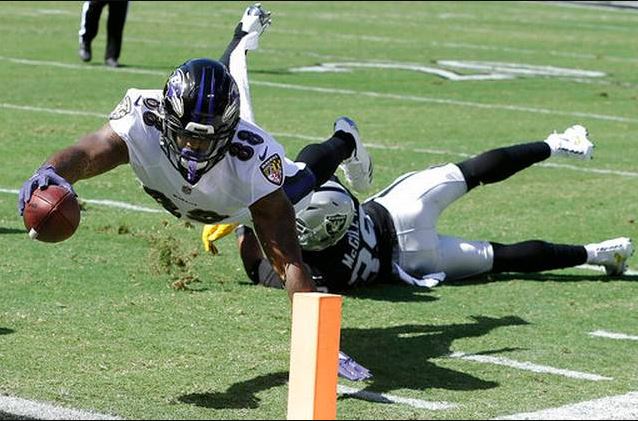 In Week 5’s 30-17 victory in Oakland, the Ravens made some key strategic moves made on both sides of the ball that not only had an influence on this victory, but were moves that need to carry over the rest of the season.

What Went Right on Offense

On offense, coordinator Marty Mornhinweg dialed up a deep shot on the first play of the game. Gotta love that.

It was a simple fly pattern, but here are the big takeaways from that play: One, it came as an early down shot play – this is when the offense needs to air it out deep. They caught free safety Reggie Nelson in a Cover One bind, leaving Mike Wallace with the space to win his one-on-one matchup. Second, the play ignited Wallace, who is someone you want to get going early in a game. Once he’s invested, Wallace is all-in the rest of the game (including as a blocker), and you need that fire from him.

Give credit to Mornhinweg for targeting the ball outside the numbers. In Battle Plans, we discussed the need for the Ravens to target Wallace, Breshad Perriman, and Jeremy Maclin more often on these sideline routes. They came through, with Maclin playing the Derrick Mason role on out patterns. You have like how Wallace and Maclin were able to balance each other out – Wallace with the monster production downfield, Maclin as the third-down target who caught six balls. That should be the game script going forward to keep both players involved.

From a blocking standpoint, the focus was to use an extra blocker (typically Nick Boyle and Ben Watson) to chip Khalil Mack. That move certainly paid off. But what else stood out was Mornhinweg’s use of tighter shotgun formations to pass protect and run the ball. He ditched the empty looks. There were times when the Ravens didn’t have more than three players out on pass routes, but they had more time to get open.

On the ground, Greg Roman’s run calls from shotgun have been mostly money, especially the draws on early downs.

Last point about the offense: Not only were the interior linemen able to locate and engage on pull blocks and second-level blocks all game long against the Oakland ILBs, but Boyle in particular had a monster day as a pull and wham blocker. He’s been the catalyst for a rush attack that consistently produces week in and week out.

What Went Right on Defense

There was a lot to like about Dean Pees’ strategy. He got after quarterback EJ Manuel in obvious passing situations. The double safety blitz on third-and-nine featuring Tony Jefferson and Eric Weddle was a symphony in pre-snap and post-snap harmony. Right before the snap, Weddle came sprinting from his deep hashmark landmark and exchanged places with Brandon Carr, who manned the slot corner position. On the other side, Jefferson lined up in the slot and got a free rush once the Oakland line shifted to pick up Weddle.

That was one of a handful of creative blitzes in which Pees brought at least five rushers. The result was five QB hits. Overall, Jefferson lined up in the box more often, a couple of times on third down as an ILB alongside C.J. Mosley. This is the way Jefferson needs to be used going forward. He’s at his best when he’s attacking the line of scrimmage. Anthony Levine and the dime package also made a healthy number of appearances in this game, which was a welcome sight.

Not only did Pees do a nice job of mixing and matching his defensive packages and personnel groupings, he also made the right move by keeping Kamalei Correa off the field. Patrick Onwuasor had another lights-out performance. He’ll make his share of mistakes, but boy does he make up for it. Case in point, the strip-fumble of Jared Cook was a play in which Onwuasor was a step behind, but his recovery speed made the difference. He’s giving the Ravens a dynamic sideline-to-sideline chaser who can make plays in space.