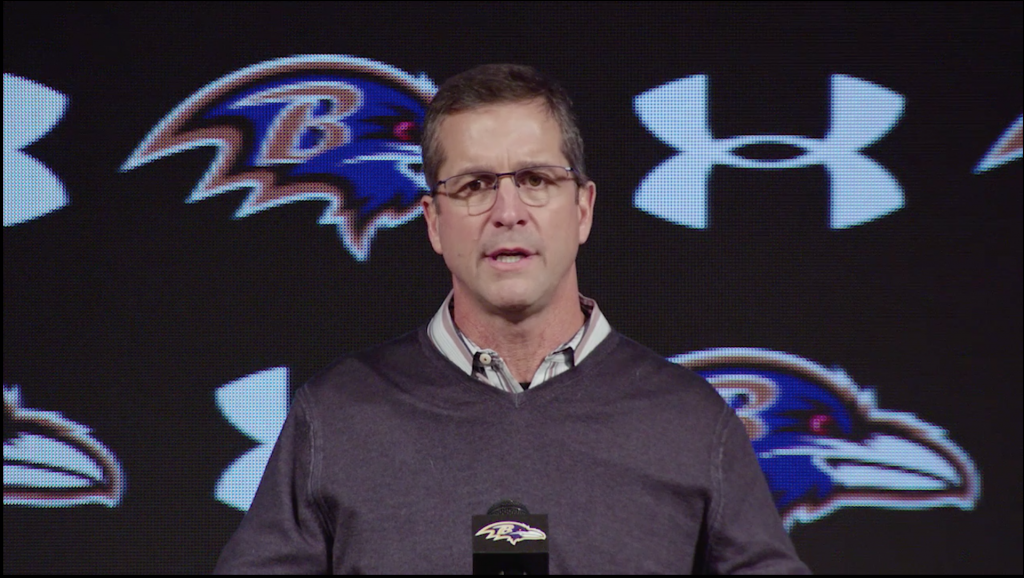 We listened to John Harbaugh’s (de)presser today, waiting with baited breath to hear if changes would be made to the offensive coaching staff.

As I watched from my laptop, I could feel the half-smile forming on my face, just knowing that the Ravens would not enter the offseason and the 2018 regular season with the “brilliant minds” that engineered the juggernaut that was the NFL’s 27th ranked offense.

I watched Harbaugh’s lips move during his opening statement. I waited for his mouth to shape into the name of MAR-TY.

But the opening statement concluded without mention of Marty Mornhinweg. And we all knew then that the great football mind that once, as the Detroit Lions head coach, deferred in overtime, was here to stay.

By then, everything seemed a bit surreal. I stared through my MacBook Pro’s screen. In my head, I could hear Rod Serling.

There is a fifth dimension beyond that which is known to man. It is a dimension as vast as space and as timeless as infinity. It is the middle ground between light and shadow, between science and superstition, and it lies between the pit of man’s fears and the summit of his knowledge. This is the dimension of imagination. It is an area which we call the Twilight Zone.

Soon thereafter, my trance was interrupted (think Maximus Decimus Meridius in The Gladiator) by a question regarding the Ravens coordinators.

“Here it comes”, I thought. THIS is what I’ve been waiting to hear.

A jarring bolt of somber reality! 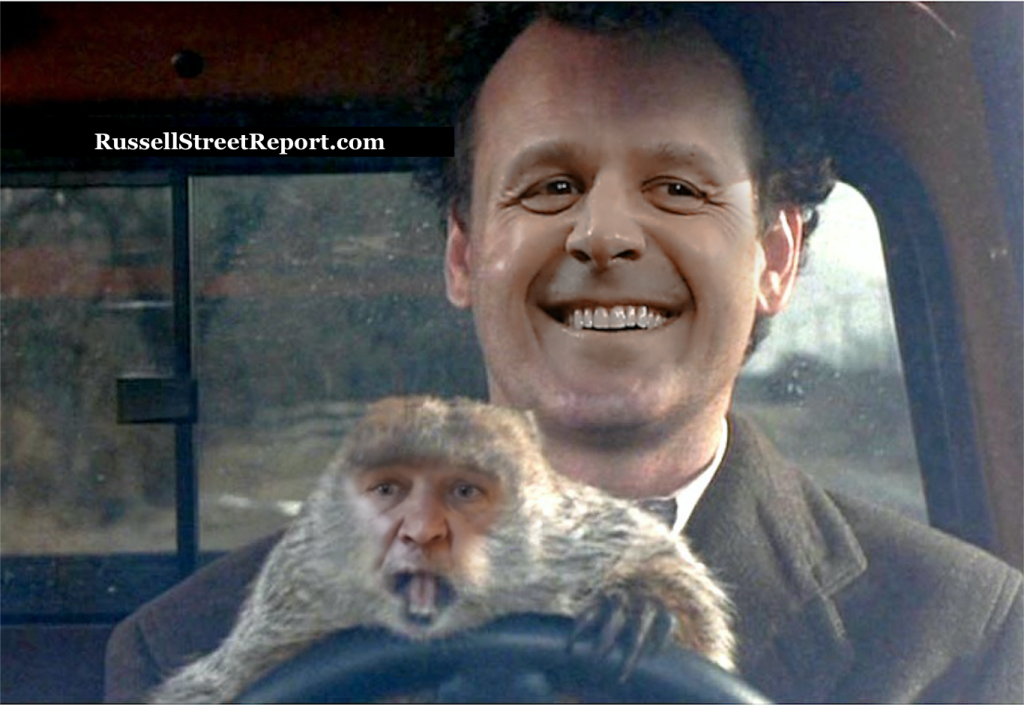 Special thanks to Anthony Clay, Jr. for this meme.

Are the Ravens really going to try this the same way again next season and expect different results?

How could Steve Bisciotti allow this to happen? Again?

Has he taken a look at the fans in the stands – or more importantly, those who are not?

Perhaps the Ravens really believe that the huge drop in attendance stems solely from the player protests and they expect that emotion to eventually vaporize. Maybe they’ve convinced themselves that the cold weather kept people at home this past Sunday.

But let’s be honest…

The biggest contributor to the drop off in attendance is the product on the field.

It’s bland. It’s boring. It’s unreliable and there’s not much, if anything for fans to identify with.

Clearly, as the 27th ranked offense, the Ravens are anything but exciting when they have the ball. And when they don’t have the ball, are there any among you who is confident that the Ravens opponents can be stopped? Particularly during crucial moments?

When you take a mediocre team, a team that is (40-40) over the past 5 seasons, with one playoff win during that span, with no identity, and no material change, how can fans get excited? Making things even more challenging for the Ravens, is that from 2000 through 2012 the Ravens DID play an exciting brand of football. They were a team WITH an identity. They were physical and defensively dominant. They were blue collar, just like the city that supports them.

And they had star power. Their team DNA fit that of Baltimore.

Today the Ravens don’t have stars. The contrast between the Ray Lewis team and the John Harbaugh team is marked. It’s like the difference between Ben & Jerry’s Chunky Monkey and a generic brand of frozen vanilla yogurt. The influx of new players has done nothing to change that. 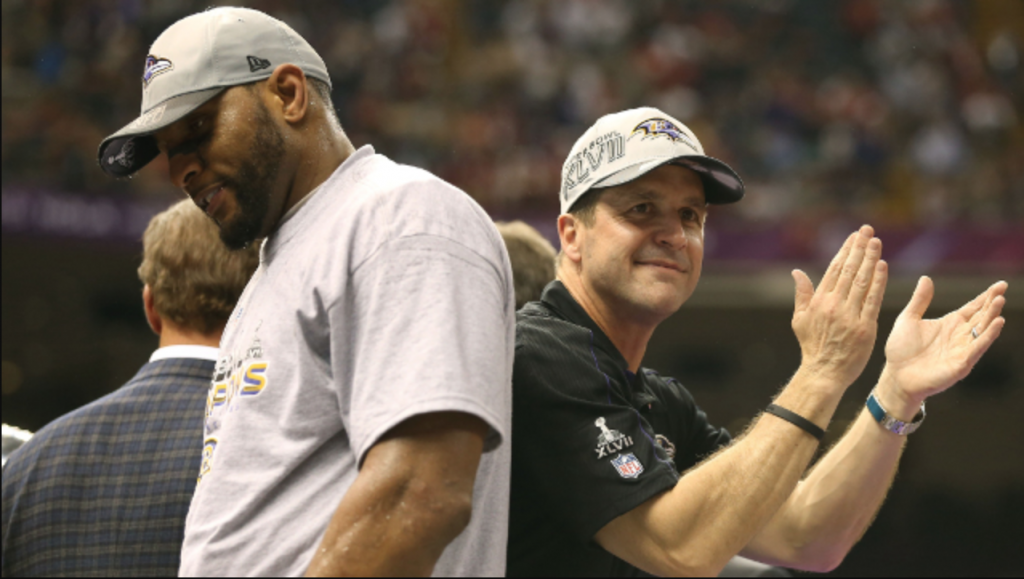 The Ravens have drafted just four Pro Bowlers since 2008. Only one is still with the team (CJ Mosley) and as of late even his play has been below average. Where have all the all-stars gone?

Throw on top of this ho-humdom, the expenses to attend games, the parking, the traffic, the influx of visiting fans, and then consider the vast improvements in the at-home fan experience. Justifying the expense becomes difficult.

Give the fans some hope. Give them some reason to believe that things will be different in 2018.

The Ravens had a chance to do that today – to throw the fans a bone. But they failed.

The organization likes to brag that their PSL’s are 95% sold out; that they hold back a small percentage for single-game sales. That there are fans waiting in the wings, hoping for an opportunity to buy PSLs should they become available.

Ironically, on Groundhog Day, February 2, PSL owners will receive notice of payments that will soon come due. Somewhat disinterested, even dismayed, many will offer the tickets to family, friends or acquaintances. And when said family, friends or acquaintances refuse to pony up the cash, some PSL owners will consider not buying the tickets at all at the risk of losing their PSLs.

But for 5 seasons, the Ravens haven’t.

Firing Mornhinweg or relegating him to a quarterback coach, the role he originally accepted with the team, won’t alone, make the fan angst go away. But it’s a start. And it’s not as if Mornhinweg was all bad in 2017. He wasn’t. The Ravens offense failed to execute plays that were well designed. Part of the “execution” problem, stems from the Ravens propensity to draft the so-called “Best Player Available” and then cram his skillset into a system. Sometimes it works. Sometimes it doesn’t. And in the case of the Ravens, with their most important player, the system, Marty’s system, doesn’t work. 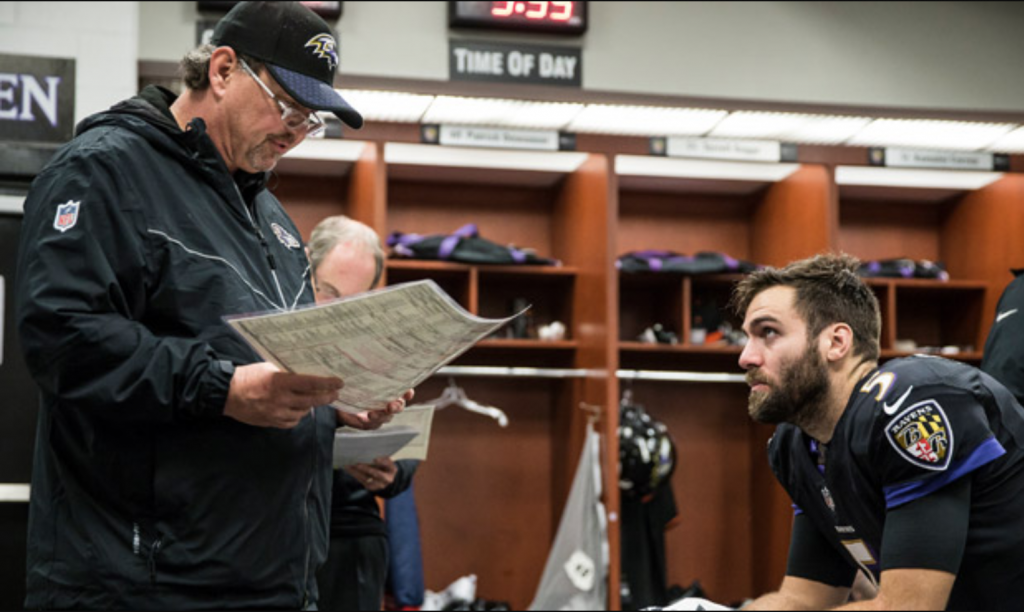 Mornhinweg’s west coast offense (“WCO”) is designed to spread the defense with crossing routes, slants and drags. That requires a mobile quarterback who can rapidly read through progressions, has a quick release, can make pre-snap reads, post-snap adjustments and is accurate. Said quarterback doesn’t necessarily have to possess a cannon of an arm, just the ability to throw on time, throw receivers open and hit them in stride in order to produce yards after catch – critical to a WCO.

Does any of that describe Joe Flacco?

Why wouldn’t the Ravens take their most expensive player and surround him with a system and talent that complements his skill set? Makes sense, right?

Apparently not to John Harbaugh.

Defensively speaking, we should all send thank you cards to Dean Pees – assuming of course that his replacement is more creative and daring both schematically and as a play caller. Ideally it should be a respected coach who won’t back down to Harbaugh like Pees allegedly did on the final play call of his career – the play that will from hereon in be referred to as “4th-and-12”.

But that isn’t likely to happen.

Today Harbaugh went on and on about the Ravens defensive system and how he believes that it is “the best defensive system in football”. Yet time and time again, the Ravens spend high end draft picks that amount to nothing. Consider the 13 defenders below, all drafted in the top 3 rounds since 2013 (16 picks in total), the first draft following Super Bowl 47 (when Harbaugh’s clout at The Castle skyrocketed):

Three of these players were complete busts for the Ravens (Elam, Brown, Brooks). One was never a fit (Jernigan) but the Ravens picked him anyway and tried to jam him into that “best defensive system in football”. Two (Correa, Kaufusi) are looking more like busts each day; another (Davis) is just a guy and three (Bowser, Wormley, Williams) made next to no impact as rookies and obviously, the jury is still out.

Was it the players or the system?

The personnel department or the coaching staff?

If nothing changes, how can they define the problem?

Oh, and for the record, the 3 players of the aforementioned 16 that were NOT defenders are Ronnie Stanley, Breshad Perriman and Maxx Williams. And two of those are, well you know…

So, the draft hasn’t been working all that well, perhaps due to some disconnect between the scouts and coaching staff; for 5 seasons the Ravens have been mediocre, and they have very little cap flexibility which will limit Ozzie Newsome’s ability to retain his own free agents and/or seek out players on the market who can help the Ravens.

This isn’t a pretty picture. In fact, it is borderline bleak.

One press conference wasn’t going to change that.

A new offensive coordinator alone wasn’t going to bring attendance back to capacity.

But John Harbaugh, reluctantly moving on from Marty Mornhinweg, could have been a signal that the man in the owner’s box is fed up with the same old, same old and that bold and more daring moves could be in store – the kind that might get his customers excited.

But that didn’t happen. Instead 2018 looks like another do over.

I’ll wait with baited breath no more. Nor should you.