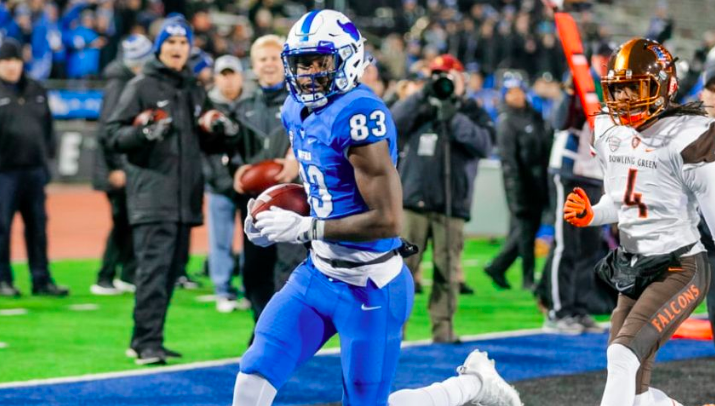 With the 2019 NFL Draft set to begin on Thursday, the big names are the talk of the town, and rightfully so. Nick Bosa, Josh Allen, Quinnen Williams and company are likely to be taken in the top five, and to go on to prolific careers. For a team like the Baltimore Ravens, who are picking later in each round due to their playoff season four months ago, they will need to dig deep in the evaluation chamber to come away with a future stud.

The first round of the draft gets all of the talk; however, it is important to look at some of the diamonds in the rough to whom little attention is paid. Here are a few prospects worth monitoring in day two and three of the upcoming draft.

The Arkansas product is about as mean and ferocious as it gets for an interior offensive lineman. With a glaring need on the inside, Froholdt would be a perfect match for the Ravens. Listed at 6’5″ and just over 300 pounds, he is an absolute monster on the inside and moves defenders with relative ease.

While Foholdt has a bit to work on in pass protection, he came in under Brett Bielema and one thing the former Razorback coach is known for is developing NFL-Caliber linemen. Froholdt will be strong in run-blocking, something that fits the Ravens’ current offensive mode.

Froholdt is a player to monitor late day two into early day three. If the Ravens choose to go a different direction round one, this is one player to keep a close eye on.

Ferguson is what many would call a “high ceiling” type of prospect. While a bit of a project, the former Northwestern State star has all the tangibles teams look for in a wide receiver. Standing at 6-5, Ferguson has the length and reach to win the high-point contested catch. That frame is something the Ravens will be looking for in a weapon for Lamar Jackson, to help win in the red zone to zone with touchdowns, rather than field goals.

One trait that stands out is Ferguson’s speed at that size, running a 4.45 40 at the combine. The flaws still remain though, as he needs work on route running and consistently separating from defenders. While an interesting project, Ferguson is worth a day three gamble to see if he develops.

It is a bit surprising Buggs doesn’t get talked about more as a prospect, but that may have more to do with the depth of this defensive line class than it does as an indictment on the former Crimson Tide prospect. Buggs stands at 6-5 and a shade under 300 pounds, but that size works to his advantage. When watching Buggs, I was reminded of Brent Urban. Buggs is quick with his hands and deceptively strong, and gets solid push.

Buggs may fit better as a 4-3 DE. However, he could serve just as solidly as a 3-4 DE. As a potential day three pick, Buggs would be a solid addition to the Ravens front seven.

Johnson is about as solid as it gets for a small-major wide receiver prospect. The former Bulls product has the frame of a potential NFL star, and uses it to his advantage. Johnson is a smart receiver who uses his frame and technique to his advantage. He was a strong part of the resurgence of the University at Buffalo’s football program alongside Tyree Jackson, hauling in over 2,300 receiving yards over his UB career.

The questions regarding level of competition are always there for these types of prospects. However, Johnson checks many of the boxes for an NFL wide receiver. If the Ravens are able to haul him in on day three, they may have a high-ceiling prospect on their hands.