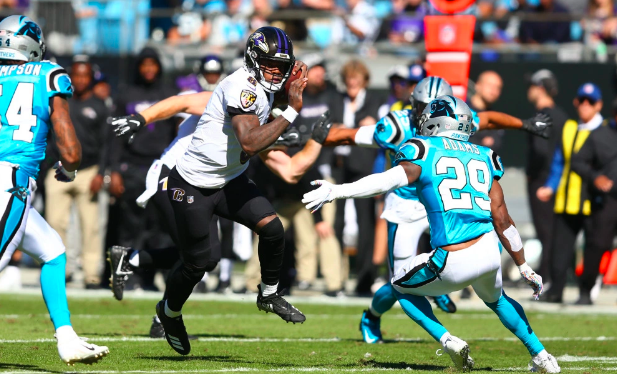 John Harbaugh heard the “snarky comments” when Lamar Jackson said that he didn’t know the Ravens were installing a new offense.

Offensive coordinator Greg Roman is building on the run-pass option the team installed over the final 10 weeks of last season. The biggest difference is the terminology and making sure the quarterbacks understand some of the new language with all of the concepts and cadences.

“Offensively, we’re doing the same thing this year. Lamar commented on it, and there were some snarky comments out there about it, but we spent 10 weeks on the offense, and Greg Roman coordinated that, and the offensive coaches built it from the ground up,” Harbaugh said. “Every word has been organized in a way, every concept has been organized in a way, that we want to build for the long haul, and we want to make it as modern and as applicable as we can, so it can be executed. All the things we want to do, can be executed well in games.”

Harbaugh has seen the offense make some strides over the last two OTAs. The second week of practices were much crisper and several receivers made plays downfield.

The Ravens are building the offense around Jackson and putting in game plans that cater to his strengths.

The team, however, is looking for more balance this season.

Last year, Jackson played in 16 games (seven starts) and completed 99 of 170 (58.1%) passing attempts for 1,201 yards, which ranked 37th in the league. He also threw for six touchdowns and three interceptions.

Jackson ran the ball 147 times for 695 yards, which led all NFL quarterbacks. He also had five touchdowns on the ground and helped the Ravens snap a three-year playoff drought.

Look for Jackson to make more plays through the air than with his feet this season. While Jackson has some detractors, the Ravens are unified in their support of him and his ability to lead the offense.

“I think you’ll be pleasantly surprised that Lamar is not going to be running 20 times a game,” Ravens owner Steve Bisciotti recently told season-ticket holders via a conference call. “That’s not what this offense is about. … Everything falls to Lamar. We believe in him. We believe he’s going to be great. He desires to be great. We will continue to build the team around his strengths, and he’ll continue to work on his weaknesses.”

The Ravens are also adjusting to new assistant head coach/pass game coordinator/wide receivers coach David Culley, who brings more than 20 years of experience to the job. Culley has been instrumental in helping with a creative offense, not only with the passing attack, but also with the overall run game and RPO.

“For us to be able to have David Culley as a part of our staff is a real accomplishment, and it’s something that we’ve been trying to get done here for a number of years, and we finally pulled it off,” Harbaugh said “I would say he’s the best straight-up teacher, communicator, that I’ve seen coaching football one-on-one, not just because he coaches it so well, but because he’s so relentless, and he coaches the important things.

“You can be relentless, but if you’re coaching things that don’t matter, then that’s just a lot of hot air. He’s coaching the things that matter, and you see the guys getting better every day within his position group, but also because of his emphasis on the passing game within the whole group.”

While the offense is a work in progress, the defense is already clicking. That unit was overhauled last season when Don Martindale took over the coordinator for Dean Pees. The defense also changed the terminology and the way it was structured.

The players now have a better grasp of the system and it has showed in the early practices.

“Even the young guys are way ahead of where the old guys were last year, because the veteran guys know it so well, they can see it done a certain way,” Harbaugh said.