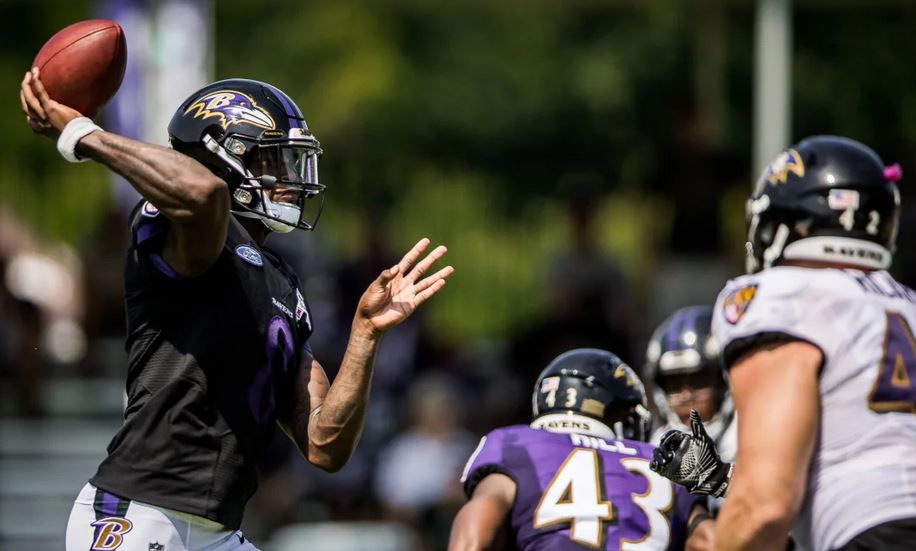 Today’s practice at 1 Winning Drive was a little less scrimmage and a little more individual drills, which isn’t exactly a crowd pleaser. Regardless, fans were treated to myriad noteworthy changes, adds, subtractions, and big plays today.

Out of the gates, the elation of fans seeing rookie first rounder Hollywood Brown hit the field in pads was obvious as he elicited some cheers from the far field at the start of practice. While Brown did not participate in any live action of 11-on-11 or 7-on-7, he did run routes with the wideouts and work on timing with Lamar Jackson in a pass & catch session on the side.

Not much more to note here – he looked quick but likely isn’t where he wants to be yet. I think it’ll be at least a few weeks until we see Brown playing up to speed.

That’s perfectly fine. No rushing the kid in the preseason.

In stark contrast to Monday’s practice, the offense did manage to show signs of life. Jackson hit back-to-back passes to Seth Roberts for 20 yards, then Miles Boykin for 15 yards. The completion to Roberts was threaded between two defenders, while the Boykin catch was an absolute snag out of midair that drew oohs & ahhs from the fans.

The biggest development on offense, however, was the shift in offensive line personnel.

Early on in practice we saw the same first unit we’ve seen every day in camp thus far: Stanley- Powers- Skura- Yanda- Hurst. About halfway through practice when the team broke into an 11-on-11 scrimmage, the line changed as Orlando Brown Jr. entered as the first-unit Right Tackle…but Powers remained the Left Guard. James Hurst was dropped to second unit Left Guard.

Could this be a sign that Powers is taking the starting Left Guard spot by the horns? Could it be meaningless?

Definitely a development worth following.

Another lesser battle that bears watching on the offensive line is Patrick Mekari taking Center snaps the past two practices, and doing it plenty. With Crecelius out Monday and today it only makes sense, and the UDFA Mekari is looking to make this team any way he can. While Bradley Bozeman remains the second-unit center and the likely candidate to make the roster as a depth C/G swing guy, it’s not inconceivable that Mekari could push him, having played both tackle and guard in college at Cal, and appearing to be learning quickly at Center.

While the glimpses were there offensively, the defense once again took control of the practice.

Contrary to much of what I’ve seen and heard, the pass rush is viable on the Ravens defense, and they showed up today.

Earl Thomas blitzed off the edge and came clean at Jackson for a play blown dead as a sack (remember- no hitting!), while other pressures on the day came from Chris Wormley, Chris Board, Tyus Bowser, Tony Jefferson, Chuck Clark and Tim Williams.

In short, there was a ton of backfield pressure off the edge.

The secondary also came through with a great showing today (as they did Monday). The most notable play of the day belongs to Thomas, who, after picking off Lamar Jackson, ran 55 yards for a touchdown. Thomas read LJ’s eyes, jumped the tight end’s route and had nothing but open field ahead of him. Thomas also showed off his physicality, tracking Nick Boyle on a catch and driving the massive tight end out of bounds without giving up a step after contact.

Tony Jefferson also had a solid day, starting early with a great pass breakup on a slant to Hayden Hurst, prompting TJ to run towards the media and fans on the sideline and chirp “Hey! Post that sh*t on Twitter!”

Outside of the Thomas-Jefferson starting safety tandem, Mo Canady again showed up, with another notable pass breakup on the near sideline, while Marlon Humphrey had another lockdown day against Seth Roberts, Mark Andrews and Chris Moore. Brandon Carr also had a pair of notable PBU’s on the day.

Play of the Day: Lamar Jackson across the middle intercepted by Earl Thomas. 55 yards to pay dirt, then runs over to the sideline arms open to the fans who met him with loud cheers.