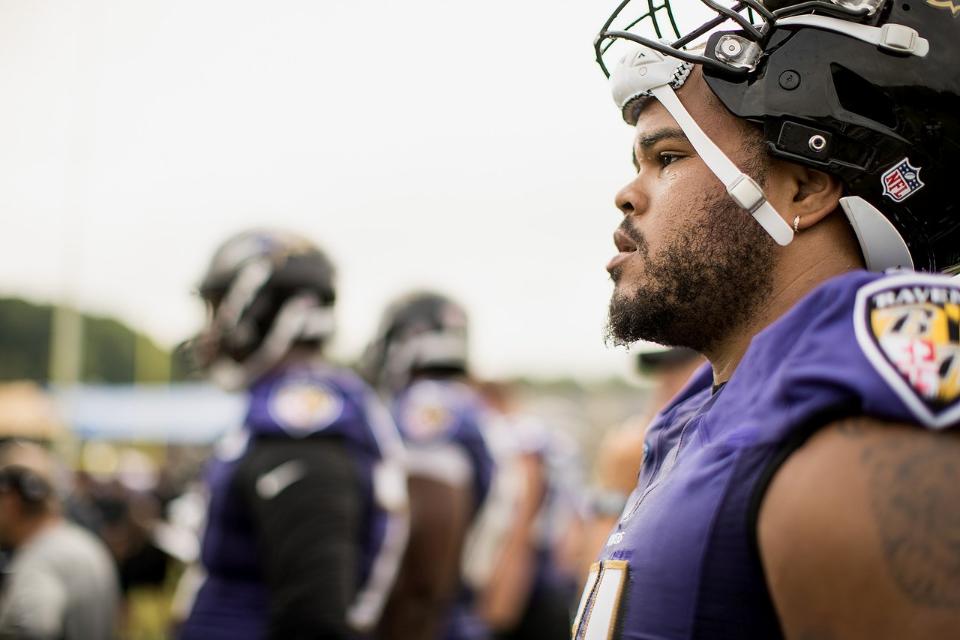 As they approached training camp the Ravens question marks were as follows:

1. Could they plug the obvious holes in the interior of the offensive line?
2. Can they replace the sacks contributed by former Ravens Terrell Suggs and Za’Darius Smith?
3. How would they account for the loss of CJ Mosley?
4. Who will catch the football?
5. And lastly, the biggest question of all, can Lamar Jackson become a quality starting quarterback?

He’s done everything the team has asked for this offseason to take his game to the next level. He’s worked on mechanics; developed better rapport with his pass catchers; aimed to improve his ball handling; mastered an offense built to leverage his unique skill set.

So far, he’s making progress. There have been bumps along the way but that’s the normal pattern of a learning curve. He’ll never throw the ball like Joe Flacco but his game is multi-faceted and he can beat an opponent in more ways than one. His speed spreads out an opposing defense and that opens things up for everyone else. Gus Edwards’ success in 2018 is proof of that. At the end of the day, style points don’t count – only REAL points.

But to whom will Lamar throw the football?

The Ravens will likely keep six receivers on the roster but it’s possible that they could shave the position down to five. If they go to six the receiving corps will most likely consist of Marquise Brown, Miles Boykin, Willie Snead (211), Seth Roberts, Chris Moore (44) and Jaleel Scott (158).
Combined, these 6 receivers have 413 CAREER receptions.

To put that in perspective, the two starting wide receivers for division rival, the Cleveland Browns – Odell Beckham, Jr. and Jarvis Landry, have a COMBINED 861 career catches. Two players with more than double the receptions of the Ravens entire projected 6-man receiving corps.

That said, there are signs of hope. Boykin has been a camp stud and likened to a young AJ Green. Brown has exceptional speed and he will take the top of opposing defenses – when he’s cleared to go full tilt. Snead is reliable and Scott’s improvement during training camp from just a year earlier has been remarkable. So far, so good. The potential is there but potential, as we’ve seen in the past, is a dangerous word.

Sounds ridiculous to say that a guy who ran 4.42 at the combine has deceptive speed but watch the CBs reaction. He’s flat-footed and in the fraction of time it takes him to turn, run & try to get a hand on Boykin, it’s too late. Nice job Miles chopping the DBs hand to stay clean. pic.twitter.com/VEqGL1sPey

Speaking of potential, the Ravens have a lot of upside at inside linebacker. Patrick Onwuasor is a playmaker. He makes impact plays and is Johnny-on-the-Spot. He forces fumbles, tips passes, and has a nose for the football. Beside him, there’s speed in the forms of Chris Board and Kenny Young. Speed kills and if the beef in front of them occupy blockers, this group can make plays plus they cover better than CJ did.

As for the pass rush, we saw a bit of what the edge guys are capable of in the first preseason game against the Jaguars. The speed to get home is there on the outside. The problem, as far as I can tell at this stage of the preseason, is that the Ravens lack an interior pass rush. Without a push from the inside, opposing quarterbacks can climb the pocket and find ample time to set and throw. It’s no mystery why the Ravens were all-in on defensive tackle Gerald McCoy.

This represents a challenge for defensive coordinator Wink Martindale and we’re unlikely to see him reveal any trade secrets during the fake games. The scouts of the Miami Dolphins are watching.

Last and certainly not least among the Ravens question marks – the interior offensive line. Matt Skura is having a decent camp. He’s added some weight and has shown some technical signs of improvement. He’ll never be mistaken for Jason Kelce or Maurkice Pouncey, but the improvement is undeniable. To Skura’s left is where the problem begins.

Jermaine Eluemunor has taken the most snaps during camp with the first-team. I’m not doubting the trained eye of the coaching staff – I’ve done that before when questioning the capabilities of Rick Wagner and the Ryan Jensen. Those players worked out. But left guard IS a concern. I get that Ben Powers is young. I get that Patrick Mekari is an undrafted free agent. I get that the Ravens prefer to retain James Hurst as a valuable swingman off the bench.

But any one of these players from my vantage point, is an upgrade over Eluemunor who looks slow, out of shape, lacks physicality and at times looks rather clueless, particularly when asked to get to the second level.

If there’s one question I’m looking for the team to really address as they prepare for their opener on September 8 in Miami, it’s at left guard. Will it be one of the aforementioned players or is the answer a player still not on the roster?

The next three games, will go a long way towards solving this mystery.

But my guard is up, pun intended…