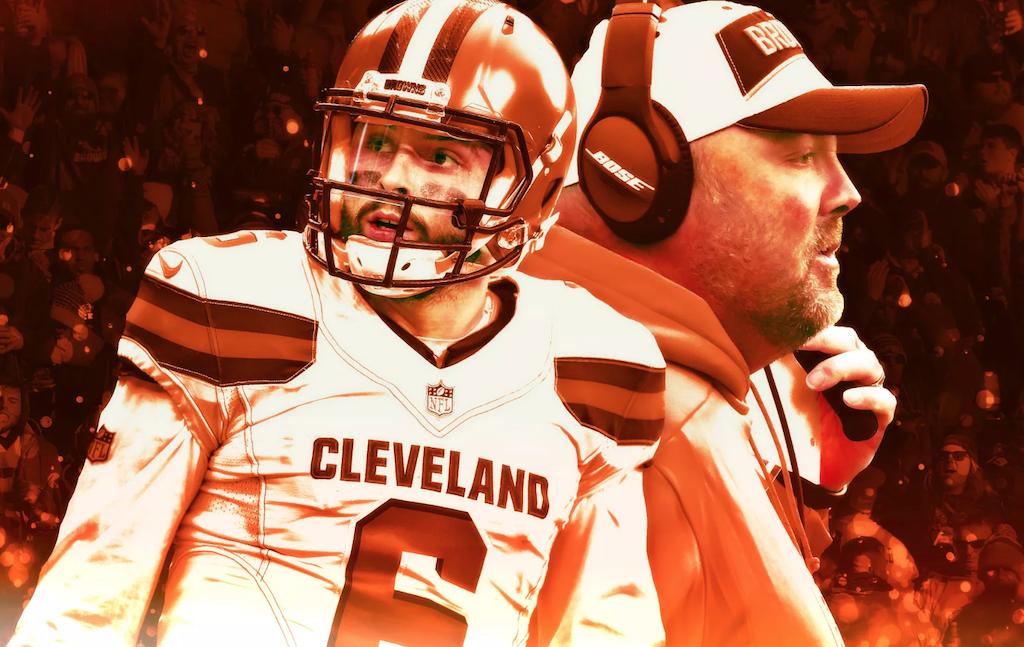 And We’re All Waiting For it to Happen

There is no denying that Baker Mayfield is a talented quarterback. Despite critics who thought that his height may be a deterrent to success, he possesses arm strength plus the mobility and presence of mind to slide in the pocket and find throwing lanes that bely his stature. That said, Baker Mayfield is a train wreck waiting to happen.

He’s obviously a coddled athlete. Parents, teachers, coaches, athletic directors, agents, GM’s and even his peers have made excuses for Mayfield from the day he first picked up a football. He has no remorse for his behavior and no one seems to want to hold him accountable for his deplorable antics.

After igniting what appears to be a one-sided feud with former Browns head Coach Hue Jackson, Mayfield was questioned on November 28, 2018 about his maturity. His response?

“People get maturity confused with me being 100 percent comfortable in my own skin. So that’s absolutely how I am. I’ve always been that way. It’s not immature. It’s me being exactly who I am every day, being that same guy for our team, and I think that’s very important right now.”

Sounds like a coddled athlete, right? His enablers are everywhere. He answers to no one but himself and that won’t change until the train wreck happens. Maybe not even then. But it’s coming. There have been signs over the past couple of years – near derailments, but they don’t seem to faze this runaway locomotive with bad brakes – not one iota!

To illustrate, let’s dial back the clock…

Baker Mayfield The Walk On (September 2013)

Mayfield is a walk-on as a freshman at Texas Tech. The then 18-year old becomes the starting quarterback for the Red Raiders’ opening game, an unprecedented move. He tears it up and by season’s end he earns Big 12 Conference Freshman Offensive Player of the Year. And then he announces that he’s leaving for Oklahoma, due to a “miscommunication” with the coaching staff.

Head coach Kliff Kingsbury gave the man a chance, believed in him – stuck his neck out as a first-year coach, and this is the thanks he gets? In January, 2014, in an interview with ESPN, Mayfield claimed that he opted to transfer due to issues with his scholarship and his belief that he earned the starting job moving forward. He believed bringing in players to compete for that job wasn’t fair. Kingsbury denied the alleged scholarship issues. 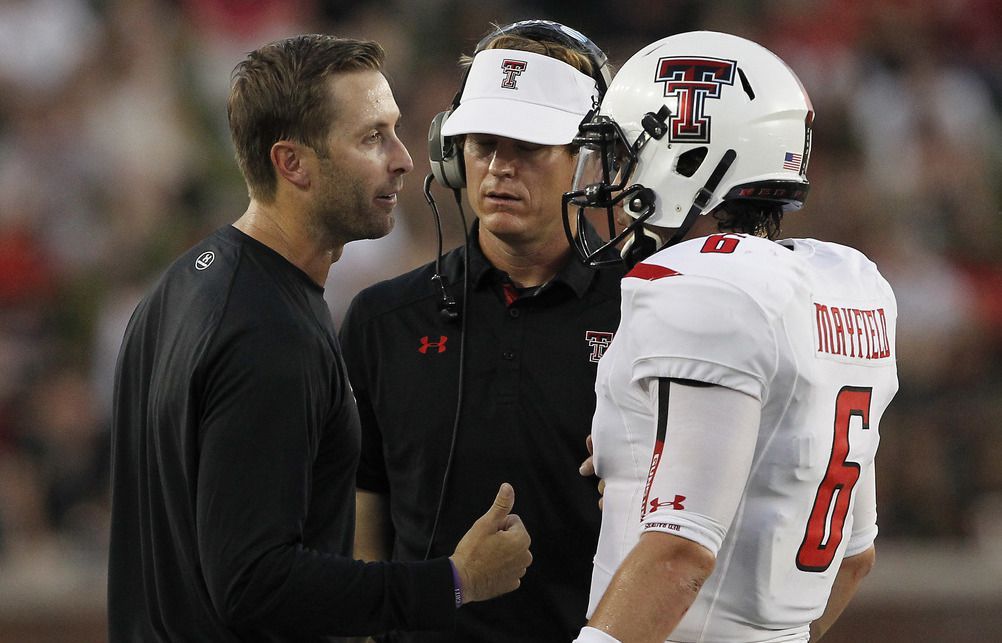 The soon-to-be 22-year old Mayfield is out on the town in Washington County, Arkansas. He’s drunk and confronted by police. He tries to run away from the officers and is tackled and later arrested.

In an interview with Fox Sports’ Colin Cowherd, Mayfield attempted to show remorse.

“There’s so much regret about that. If I didn’t run, nobody would’ve been questioning me about being the next dropout in football. There’s a lot of regret to it, but at the same time, that was a rude awakening to responsibility and accountability to me. That was a very hard lesson learned. That was very eye-opening for me.”

Later on, in the interview while commenting on his attempt to run from the police, Mayfield sarcastically criticized his own getaway speed, obviously fishing for a laugh. There was none from Cowherd.

Nevertheless, Baker insisted he learned his lesson and has become better as a player and a person as a result.

Or is this really just Baker being Baker — again?

November 18, 2017, the Sooners take on the Kansas Jayhawks in Lawrence, Kansas. Prior to the game during the coin toss, the Kansas captains refused to shake the hands of their guest captains. Game on!

At one point during the 41-3 rout, Mayfield turned to the Jayhawk faithful and said, “go cheer on basketball”. Then after the fiery quarterback tossed a touchdown pass to Mark Andrews, this happened.

It was an awful look for the then aspiring Heisman Trophy Winner. He had no choice but to apologize for embarrassing fans, teammates, parents and his school.

“I was not the good and inspiring role model I aspire to be.”

This is about as sincere as a Lance Armstrong apology.

We’ll come back to this.

When asked about former Ravens QB coach Hue Jackson, Joe Flacco spoke glowingly about their relationship and how Jackson was instrumental in his development as a professional. Such sentiments are shared by others around the league who have benefitted from Jackson’s tutelage. He has a Midas touch when it comes to quarterbacks.

So, it’s no surprise, after recognizing Mayfield’s talents as the Browns head coach, Jackson went to bat for the Oklahoma star prior to the 2018 NFL Draft. He campaigned for Baker and pleaded his case to Browns GM John Dorsey. It’s a case that Jackson won.

During the HBO Hard Knocks season that featured the Browns in 2018, Jackson’s admiration for his brand new No. 1 overall pick was obvious – just as obvious as his message to Mayfield that his day would soon come when he makes the Browns his team.

Mayfield’s brooding was apparent during Hard Knocks. Maybe, just like during those days at Texas Tech, he thought it wasn’t fair for Tyrod Taylor to be named the starter.

Despite getting his man in Mayfield, things didn’t go well for Jackson in Cleveland. After dropping to (2-5-1) at the halfway mark of the 2018 season, Jackson was fired on October 29. Two weeks later Bengals head coach Marvin Lewis hired his old friend Jackson, to be a special assistant.

No one should deny a man the right to a livelihood, right? No one should take exception to a man accepting new employment after being fired, right?

Not if your name is Baker Mayfield. 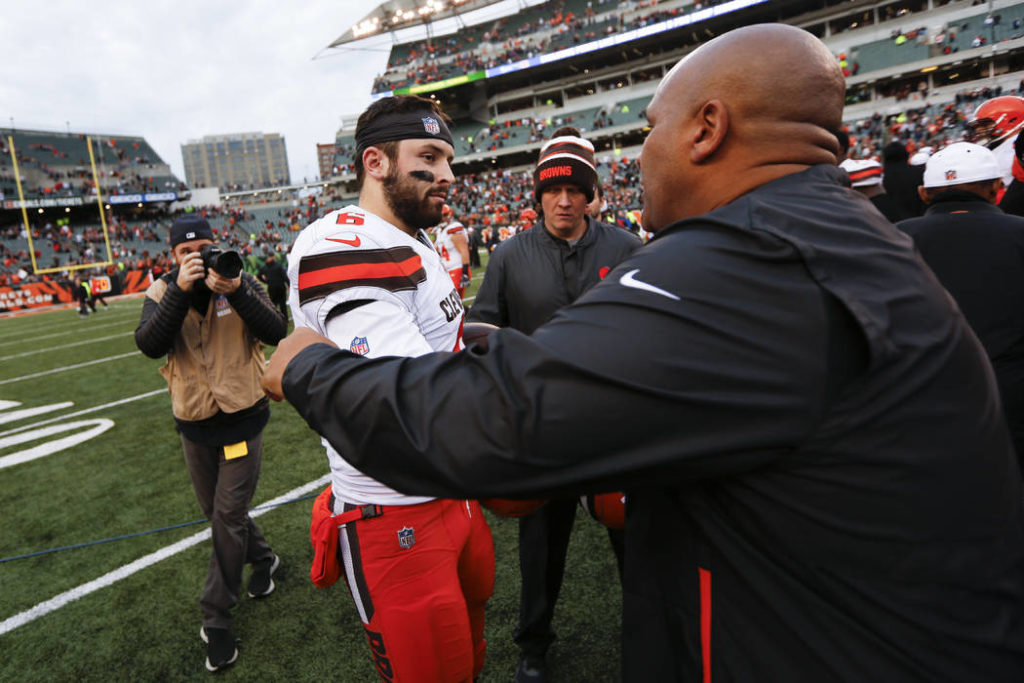 “Left Cleveland, goes down to Cincinnati. I don’t know. That’s just somebody that’s in our locker room asking for us to play for him and then goes to a different team we play twice a year. Everybody can have their spin on it, but that’s how I feel.

That makes sense only to this entitled brat.

During the second contest between the Browns and Bengals on December 23rd, Mayfield taunted and stared Jackson down after throwing a touchdown pass.

Extended version: Baker Mayfield stared… and stated… and stared even more at Hue Jackson. He doesn’t like him and he doesn’t hide it. pic.twitter.com/2LuVoeN78t

After the game the former Boomer Sooner was hardly remorseful.

Later he would label Jackson “a fake”.

It will be interesting if nothing else, to see how this relationship develops with Kitchens who is supposedly his boss. But who among us doesn’t think that Kitchens will be the one playing the subservient role?

The career span of an NFL running back is generally shorter than most other positions. The wear and tear on the body takes its toll and the skill set that fueled success and accomplishment, begins to erode. So, who could blame a productive back, dropped on the depth chart where his value is diminished and his future earning potential threatened, to request a trade?

Browns RB Duke Johnson racked up 630 yards from scrimmage during just 87 touches in 2018, an average of 7.24 yards. He spreads the field with his quickness and is a nightmare matchup for linebackers. He didn’t want his playing time reduced. He sought to preserve his value and therefore sought to move on. The Browns were initially reluctant. So he skipped the non-mandatory workouts to try and force the Browns’ hand.

Typically, when questioned about a teammate’s job-related negotiating tactics, players will say something to the affect that “it’s just business and we hope things work out for Duke and the Cleveland Browns”.

The media is accustomed to such responses. It’s a generally accepted practice from players – code, for the media to back off and move on to the next question.

But this self-absorbed, narcissist missed that memo and instead railed on Duke.

“You’re either on this train or you’re not,” Mayfield said, per Cleveland.com’s Mary Kay Cabot.

When he was asked if the situation has led to any form of awkwardness, Mayfield shook his head and said, “It’s self-inflicted. It is what it is. It’s not awkward for anyone else in this building.”

Then came the next question. Would he support Johnson as a teammate? Mayfield responded, “He’s gotta do his job. He said he’s a professional. I hope he does his job.”

The Browns locker room was not impressed and they shared as much with Baker.

Time will tell if that was a lesson learned, but Mayfield’s history suggests otherwise.

“I just don’t like the idea of my franchise quarterback spending time at a baseball game. I mean, what are you doing, @bakermayfield? You don’t see guys like Aaron Rodgers shotgunning beers. Just not a good look. Go watch some film.” – @ColinCowherd (probably)

On the surface, the beer chugging is not a big deal. Not ideal for your starting quarterback, but given Mayfield’s history, you have to wonder if he’ll ever grow up.

Judging by the Tweet above, the Cleveland Indians approve. Judging from the video, Mayfield is a pretty accomplished chugger. Add it up and he’s suddenly a cultural phenomenon in Cleveland. There’s an alluring machismo for fans to see their QB behave in such a way. Other quarterbacks like Tom Brady and Aaron Rodgers have done it.

But that’s Brady and Rodgers, former league MVP’s and Super Bowl MVP’s, neither of which has collected the rapid-fire history of unsavory events by the age of 24.

Add the Indians and the fans of Cleveland to Mayfield’s list of enablers.

Making matters worse, sponsorship opportunities lie in wait. Despite the trail of broken glass, endorsement deals for Mayfield are in play.

“I believe so,” said Blake Lawrence, co-founder of the athlete-marketing platform Opendorse.

“I think that Baker has done a good job of staying close to that personality that makes him polarizing. Coming out of college here’s a guy who’s not afraid to voice his opinions and you can tell he has a good time. There are certain sponsors – sports sponsors – that love that type of personality. With his on-field success last year that helps as well. Viral moments like this create an opportunity that attracts a certain type of sponsor. Other ones will run away from this.”

And then we can add those sponsors to the list of parents, teachers, coaches, athletic directors, agents, GM’s and teammates, who do not hold the Browns QB accountable for behavior like that of a petulant child with a grotesque sense of entitlement. Instead they just continue to feed the beast that is Baker Mayfield.

The beast will eventually grow out of control and then society, perhaps even Cleveland will slay it. The train wreck will happen.

What happens afterwards is up to Mayfield.

Will he become that role model he aspires to be or will Baker keep on being Baker?

After all, he’s always been that way.

I was recently reminded of another of Baker’s typical classy moves. Enjoy…

Any Browns fans who would like to submit a rebuttal, we will publish it as a guest blog provided it isn’t obscenity-laced. Submit to info@russellstreetreport.com.

Baker Mayfield got into a back-and-forth with a reporter and walked out of his weekly press conference.

Everybody wants to hear the truth until they actually get it…. I am who I am and always have been. Don’t call it emotional when it’s convenient and then passion when it fits. I care about winning, so yeah I’m frustrated. If I was to act like it’s okay to lose, then y’all would