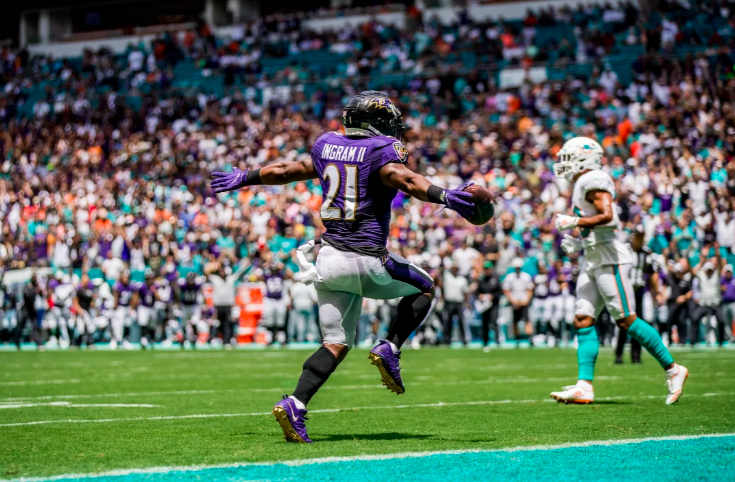 Running with the Ravens – Week 1

Happy Friday Ravens fans! Welcome to part II of The Coordinators week 1, where we catch up on the Ravens run game attack from Sunday’s whooping of the Miami Dolphins.

Did you miss Part I focusing on the passing tendencies? No worries, check it out here.

As a reminder from Part I, here was the breakdown of the full game and first 4 drive run-pass splits.

Some of the same caveats apply with Ravens running game that applied to the passing game and that, of course, is the influence of the game script. I pointed out the first four drives because I think that is more representative of the game plan approach going into Week 1. After you’re up 28-0, you’re entering blowout territory and you’ll begin to milk the clock, which leads to more carries.

Gus Edwards has been taking a little heat from Ravens fans for his Week 1 performance. I was interested in breaking it down by quarter to see if the game script did impact him. As you grind out a blowout in the 4th quarter you’ll see more stacked boxes, blitzes, etc. Here’s the breakdown:

It’s too early to be making any claims about players. Chalk it up to a below average game for Gus Bus. He’s still going to be ‘the hammer’ complement to Mark Ingram and I think any reaction after one week is an overreaction.

Speaking of Mr. Ingram, the addition paid dividends for the Ravens, and I mean immediate dividends. Ingram took his first rush of the season on a power right for 49 yards.

It is interesting to note that even if you take out the 49-yard rush, Ingram still took his other 13 carries for a 4.46 average. He looks like a lead back that fits this scheme like a glove.

Not surprisingly, the Ravens had most of their success running to the right side of the offensive line. The unofficial guideline to building an OL is to put your run blockers on the right side and your pass blockers on the left side. Of course, there’s always an exception when you have elite players who do it all (i.e. Marshal Yanda can play on either side), but that is the general rule of thumb.

When you take away Anthony Levine’s dash up the middle on a fake punt for 60 yards, the numbers of middle runs reduces to nine carries for 25 yards and a 2.8 average.

The Ravens had some success with middle runs last year with the read option and Edwards, but it wasn’t quite there on Sunday. Zone reads up the middle went for:

This is a small sample size, but something to keep an eye on. On both of these plays the run was going behind C Matt Skura, who has struggled to get some push when he’s hat on hat with a defender.

In terms of the hole that the Ravens ran through, here’s the breakdown. Please note: I took out the 60-yard run on a fake punt by Levine for the purposes of this graphic:

I don’t think it’s a surprise to any Ravens fan, but I think this chart just goes to show the value of running behind Yanda and Orlando Brown Jr. 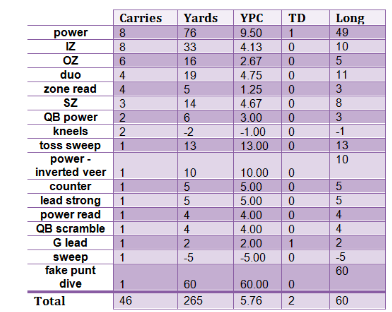 The play-calling in terms of run balance showed a good balance between the power run attack and zone attack, which has been a trademark of Greg Roman during his career.

In fact, the most prominent, and most successful, were power and inside zone runs. A couple of notes:

— The other 2 powers went to Edwards (2 for 4 yards), while Lamar Jackson and Robert Griffin III each had 1 QB power for 3 yards.

— Inside zone (IZ) was mostly used in the 4th quarter as the Ravens chewed the clock where they had 5 of 8 total IZ carries for 18 yards.

The stat that stood out the most was the number of outside zone (OZ) plays that were called. It wasn’t a big focus of the rushing attack lack year, but I think that’s because Kenneth Dixon and Gus are better between the tackles. Ingram had three OZ carries for eight yards, Edwards two for seven and Hill one for one. It will be interesting to see how that plays out moving forward.

Hill’s usage was of particular interest to a lot of folks. He is seen as the change of pace back with big play ability, which lends itself well to getting outside rather than between the tackles. Hill attempted both of  the sweeps called, with the toss sweep on the first drive going for 13 yards and the handoff sweep going for -5. In terms of the hole that Hill went through, the breakdown:

So the plan seems to be to get the ball outside with Hill. It will be interesting to track his usage week to week.

Through the first game it appears we have a great complement of running backs for the mixture of run plays Roman wants to call.

Patrick Ricard started the offseason as a potential cut, but spent the entire preseason pushing himself into the ‘lock’ position through each performance. The personnel and results showed just how valuable he can be as a FB.

I had a few questions on this, so just to provide context for the folks at home, the personnel digits refer to the number of RB (also includes FBs) and TE on the field. The first digit indicates RB and the second digit indicates TE (i.e. 11 = 1RB / 1 TE and 21 = 2 RB and 1 TE).

For the purposes of charting, Ricard is a FB, but The Coordinators do acknowledge he is used as a TE and H-back in some scenarios.

One of the more interesting notes from our passing article was how the Ravens tried to spread out the defense through their formations. It was no different in the running game. They used a 2×2 formation (2 players split out from the line on each side – which indicates a spread formation) on 11 of their carries that went for 64 yards (5.82 avg). 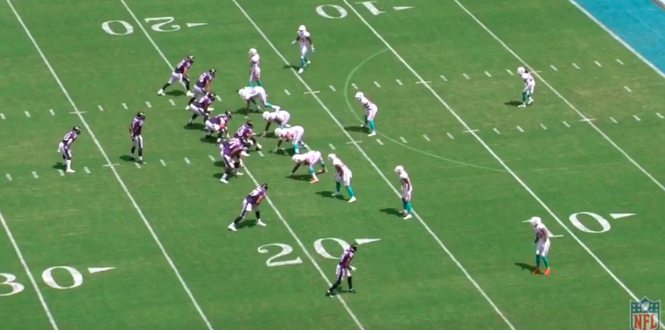 So while it doesn’t spread the defense out like a traditional spread, it does still throw a different look out of 12 personnel.

Here’s the breakdown by formation:

The formations in which it says “X formation to Y formation”, are ones that involved motion.

On the topic of using motion in the run game, the Ravens motioned a man in 32 of 45 (again taking the punt out) running plays, which is 71% of all plays. That is a very high number, but as we continue to track I think we’ll continue to see frequent use of motion because it’s a staple of Roman’s scheme.

One of the tendencies we saw was that Ricard would split out and be motioned into the backfield either as a FB, H-Back or TE. For example:

Using motion has a few benefits for the offense as a whole. It helps Jackson get a better idea of the pre-snap defense (i.e. identify the coverage). It can shift the defense and create a more favorable look, open a cut back lane, or other benefits. It can also help identify which defenders are responsible for which gap.

If you have a defender lined up on a tight end on the right side, and you motion them to the left, but that defender doesn’t follow you, it can tell you a few things. They could be in zone coverage or that LB that was lined up on the TE could have C (or D) gap responsibility.

There’s a multitude of examples, but this is just one area that the Ravens use to their advantage.

The Cardinals held the Lions rushing attack in check in Week 1, but lets be real: that run game isn’t on the level of Baltimore’s.

Arizona sported the #32 power run defense in 2018, and while our old friend Terrell Suggs is a great add, I’m not sure they boosted their run defense to take down Baltimore’s power run game.

Look for a heavy use of powers to get Mark Ingram going early with some inside work from Gus Edwards and outside work from Justice Hill.

Join us every week as we run with the Ravens and recap the run game!