Running with the Ravens – Week 2

Happy Friday Ravens fans! Welcome to part II of The Coordinators Week 2, where we catch up on the Lamar Jackson show, sorry, check that, I mean the Ravens rushing attack from Sundays 23-17 victory over the Arizona Cardinals.

Don’t forget to read Wednesday’s Air it Out column, where we broke down the passing attack.

As always, here’s a reminder of the run-pass split from the game, which includes a new format to more accurately show the play calling tendencies of Greg Roman.

Note: we had a slight correction. One of Lamar’s scrambles in our first round of charting turned out to be a QB draw. So the proper listing should be:

The game script against the Cardinals provides a much better read into the play-calling tendencies, as well as the current game plan for RB usage, than we saw against the Dolphins.

It is clear that Mark Ingram is the lead back, and while Gus Edwards and Justice Hill provide complementary skillsets, it isn’t currently a three-headed monster with balanced carries. This, of course, can change any week, so I won’t completely let go of my dream that we see the return of the McGahee-McClain-Rice three headed monster from the 2008 season.

That said, it wasn’t a particular effective day on the ground for the RB group. Lamar Jackson stole the show and used his legs at appropriate times. We’ll go more into depth on the play calling that led to Lamar’s 120 yards on 16 carries a little later.

Last week yielded some interesting results with regards to the running direction. When you took out Anthony Levine’s 60-yard punt that went up the middle, it showed that runs aimed at the middle were very ineffective. The right side was the most effective and the left side was average (4.75 YPC).

Fast forward and a week and we see significantly more balance among the directions. A lot of this could be attributed to the Lamar effect.

It’s standard for QB carries, either on designed runs or scrambles, to go toward the edge rather than up the middle. For example, on a read option, it’s typically a dive for the running back if they receive the ball and an edge run for the QB if they keep it. Improvising happens, but that’s the standard approach. Of Lamar’s 16 carries, only four went up the middle.

This is also a more encouraging note given the concerns around the interior offensive line. While they didn’t have an outstanding game by any means, they were able to make some strong pushes on a few runs, including the 19-yard QB draw on 3rd and 20 (3Q, 0:56) that was a yard short of a first down.

The biggest takeaway of Sunday’s performance was that the right side wasn’t the most effective direction for the run game. I spoke last week about how typically your right side is your better run blocking side, and given that Yanda and Brown are there, you could see why it is that way for the Ravens.

It wasn’t the case on Sunday, as they only produced a 4.33 average on runs to the right. Let’s take a look at the targeted gap, to get a bit more detail: 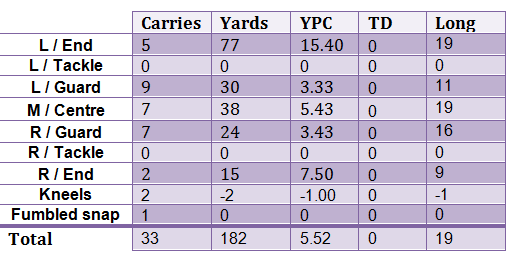 The edges on both sides were the most effective hole for the run game, but it should be noted that Lamar was the ball carrier on all seven of those carries. Of the seven, three were QB scrambles on called pass plays that went for 46 yards. The other four carries for 46 yards came on three zone reads and a QB keeper that looked like a bootleg.

When considering the up and down performance of the offensive line, it’s noticeable that runs behind both Bozeman and Yanda were inefficient with a 3.33 average on 16 carries.

The offensive line had some tough plays given the way the Cardinals loaded the box. For example, here’s a look at the 9-man box they faced with 22 personnel:

The play call was a power right, in which Ricard motioned to and the ball went behind RG Marshal Yanda that resulted in 3 yards.

The Ravens have done some very interesting things with Patrick Ricard, but it’ll be interesting to monitor how having him split out wide impacts the defensive alignment and if it is telegraphing a run. 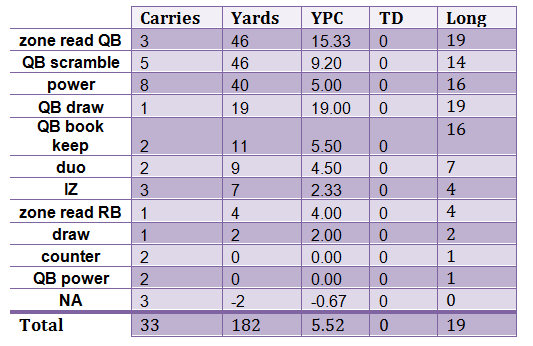 Here we see those zone reads that were mentioned above that went for 46 yards. We also see the QB scrambles and the QB draw that made up the bulk of Lamar’s rushing day.

Perhaps the best note of these runs was the way Lamar navigated the field to avoid contact. Going into the season there was a lot of discussion about the injury risk Lamar takes on by exposing himself. However, I think this type of play calling that aims him towards the edge, and his decisions on when to scramble give him a great opportunity to get out of bounds and avoid that contact.

One of the biggest takeaways from the play calling was the lack of outside zone (OZ). Last week Roman called six OZ and this week he had 0. I speculated the running game might be better suited to be an inside attack given that the Cardinals had Terrell Suggs and Chandler Jones at the edges. However, the opposite was the successful approach for Lamar.

The power runs finished with a respectable average per rush, but a lot of that yardage came off one play, which was a 16-yard power right by Ingram (Q1, 1:28). However, when that play is removed, the other seven attempts went for just 24 yards.

Inside zone was (3 carries for 7 yards) also ineffective and underused, but that is likely a symptom of the Ravens turning to Lamar’s legs.

This is a great opportunity to highlight back-to-back plays that demonstrate the genius that is Greg Roman in designed run plays. Let’s take a look.

Very next play, Lamar gains 16 yds on QB boot keep. Everything looks like the previous play: formation, motion, even Lamar reversing out (turning to his left opposite the RB's path to show the hand-off) after the snap. Details matter. pic.twitter.com/sle9xhepa2

These two plays use the exact same personnel (22 personnel), formation (2Lx1R) and the motion (Ricard motions to the right side. The obvious difference being that Edwards comes in as the RB.

Roman strategically used the first play to set the second one up.

It’s a very interesting approach to give the exact same look and it baits your opponent into chasing down a play that just went for 16 yards. However, Lamar keeps it and boots up the left side for 16 yards. Same play, two different ball carriers.

That is genius play construction by Roman and Jackson. Being a fly on the wall of the offensive coaching room would be the experience of a lifetime.

If I had one complaint about Sunday’s context it was the heavy use of 22 personnel. Now, that may seem ironic given that I just drooled over the plays above that were both run out of 22, but let’s also remove those two plays. If those two 16-yard rushes are removed, the Ravens had eight carries out of 22 personnel for 11 yards.

The heavy use of 22 likely led to some of the stacked boxes the Ravens saw, which doesn’t often translate into a lot of success.

To contrast, if we look at 11 personnel, Baltimore had a much better output of 10 carries for 64 yards. Even if we remove the long of 19, that’s nine carries for 45 yards (5 yards per carry).

12 personnel also was successful, but similar to the passing game, those five play calls spread the field out more than you would see in a traditional 12 personnel with 2 TEs in-line. 4 of the 5 12 personnel runs were in formations that split out 1 of the TEs from the line.

This is something I think we can dive into in a separate article with some clips that show some of the advantage of motion that were fleshed out last week.

It’s a tendency that has been a huge factor of Roman’s rushing attack through his career and it’s still playing a large role. Given Lamar’s ability to read the field, it’s only going to benefit the young running back, sorry, the young quarterback.

The Kansas City Chiefs have a game changer at DT in Chris Jones. That said, the rest of their defense is not great against the run. How does that make me feel?

Jones has 11 pressures through 2 games. It’s going to be the key matchup for our OL. #RavensFlock #EatYourWheatiesMatt

Rain is in the forecast for Sunday and the run game may be the crucial factor in having success against a very good KC Chiefs team.

In addition, controlling the clock and keeping Patrick Mahomes off the field are key paths to victory for the Ravens.

This is the perfect opportunity to get the run game firing on all cylinders. Check back next week when we run with the Ravens again!