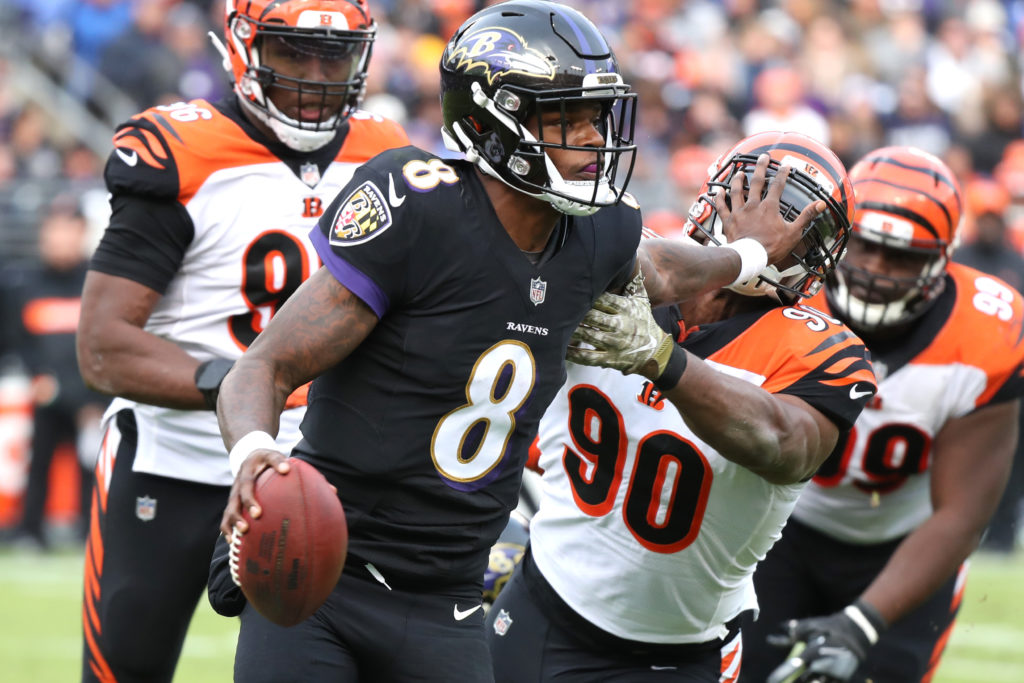 The San Francisco 49ers did the Ravens a huge favor by completely dismantling the Cleveland Browns in front of a national television audience on Monday Night Football.

One week after taking the Ravens apart, Cleveland quarterback Baker Mayfield was sent spiraling back to earth against a devastating San Francisco pass rush.

The Ravens (3-2) leapfrogged the Browns (2-3) in the AFC North standings and have sole possession of first place.

That will be vital for the Ravens, who now control their own destiny for the playoffs.

“I think that depends on us,” Harbaugh replied when asked if he expects a topsy-turvy season in the AFC North. “I think that depends 100 percent on us and what we do. ‘Us-plus-us’ is what we’re interested in, and that’s the equation that we’re believing in. So, let’s take care of our business, and business will be taken care of.”

The Ravens have some momentum heading into a Week 6 matchup against the winless Cincinnati Bengals, a team that has given them fits over the years regardless of its record. Baltimore opened as a whopping 11.5-point favorites. Bengals receiver A.J. Green is not expected to play, another variable that considerably works in the Ravens favor.

Harbaugh and his crew cannot afford to let this game slip past them. The upcoming schedule gets tougher down the stretch where stacking wins will be an even greater challenge.

After playing the Bengals, the Ravens face a tough cross-country test in Seattle. The Seahawks and quarterback Russell Wilson will create matchup problems for the Ravens beleaguered secondary, which is now dealing with the loss of safety Tony Jefferson to a season-ending knee injury.

Seattle has already beaten the Steelers, 28-26, and edged by the Bengals, 21-20. The Ravens will pose a bigger threat than both of those teams and could feasibly head into the bye at (5-2) with a pair of victories over the next two weeks.

From there, the schedule gets even more brutal.

The Ravens host the New England Patriots on Nov. 3 for a nationally televised Sunday night game. New England (5-0) will likely be undefeated and they’ve already demolished the Steelers 33-3 in the regular-season opener.

Baltimore gets another shot at the Bengals the following week before four consecutive games against teams that will be in the thick of the playoff race — the Texans, Rams, 49ers and Bills.

The Browns (2-3) don’t have it much easier with an upcoming stretch of games against Seattle, New England, Buffalo and Pittsburgh over the next month.

However, the Ravens need to take advantage because the second half of Cleveland’s schedule is much easier with two games against both the Bengals (0-5) and Steelers (1-4) with other matchups against the Cardinals (1-3-1) and Dolphins (0-4).

Again, stacking wins is paramount to postseason aspirations for the Ravens. At the very least they will need to hold serve at home to stay atop the division. Perhaps, a record of (8-8) will be enough to win the AFC North with both the Bengals and Steelers already looking toward 2020.

Ravens quarterback Lamar Jackson is going to have to make some adjustments. He needs to be more effective with his intermediate passing because teams are dropping two safeties to prevent him from throwing deep downfield and stacking the line to thwart big running plays.

“Lamar is going to tell you that he needs to play a lot better, and there are so many things that he can learn from that game,” Harbaugh said. “He’s in his 12th game, he’s in his first [starting] season, and he’s learning by leaps and bounds every single week, because you see new things all the time.

“He’ll be doing that throughout his career, but now is when it’s steepest, and he learns fast. So, that’s good for us.”

The Ravens are going to need better play across both sides of the ball to earn that second straight trip to the postseason.

From there, anything can happen.