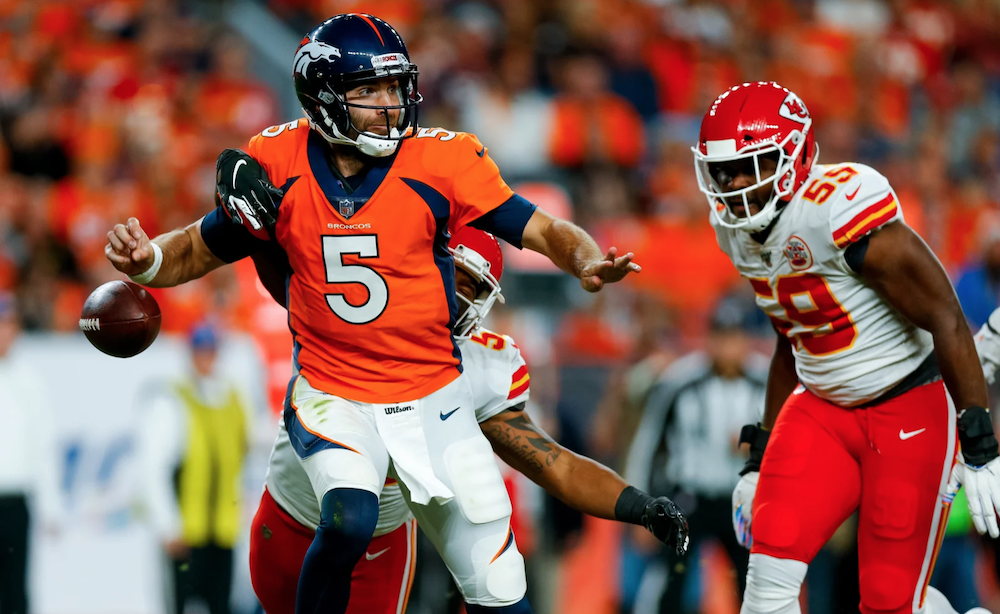 If you watched the Thursday Night game featuring the Kansas City Chiefs at the Denver Broncos you saw a familiar sight – Joe Flacco fumbles, Joe Flacco staring down receivers, Joe Flacco using the same cadence repeatedly, Joe Flacco lacking pocket awareness, Joe Flacco determining where he’s going pre-snap and Joe Flacco checking down to receivers who have no chance for YAC while getting blown up by defenders.

And you also saw that same lifeless dead fish look in his eyes while approaching each play devoid of any sense of urgency. It’s body language that is contagious. More offensive teammates caught the Flacco Flu on Thursday than they did his passes, that too often sailed well out of bounds, just like the one below…

The Joe Flacco error in one play. pic.twitter.com/WkMCI6Zard 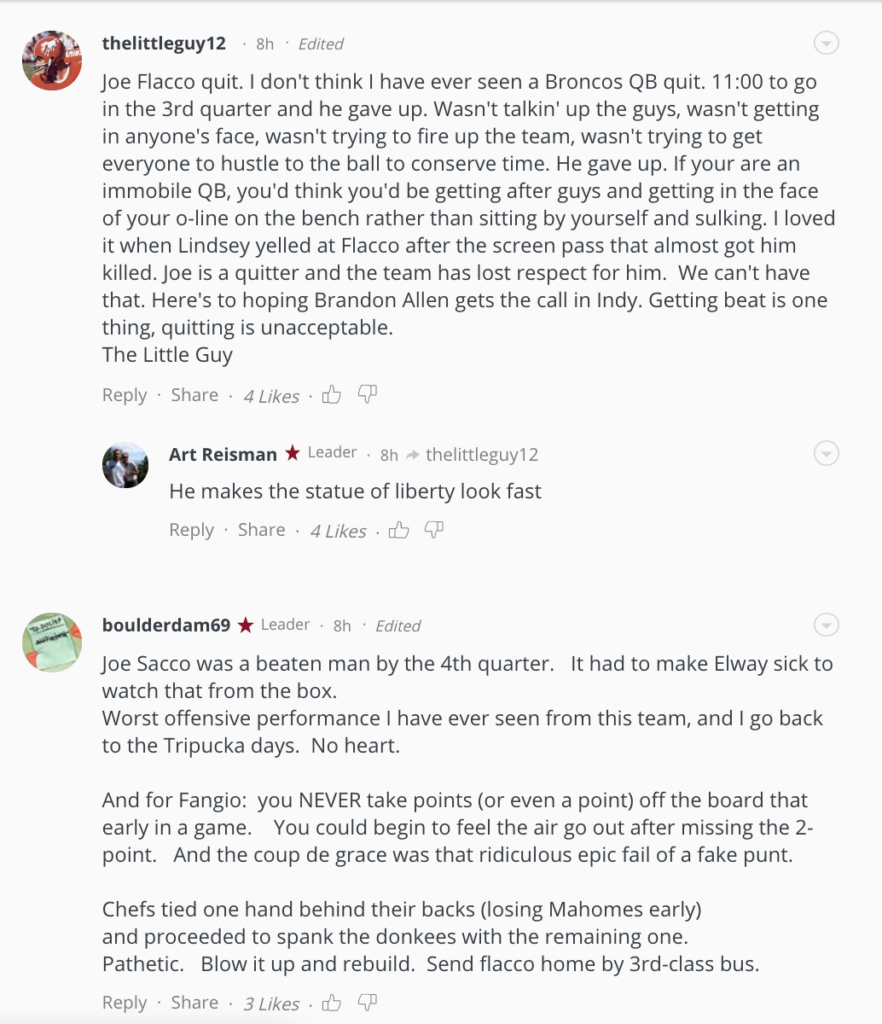 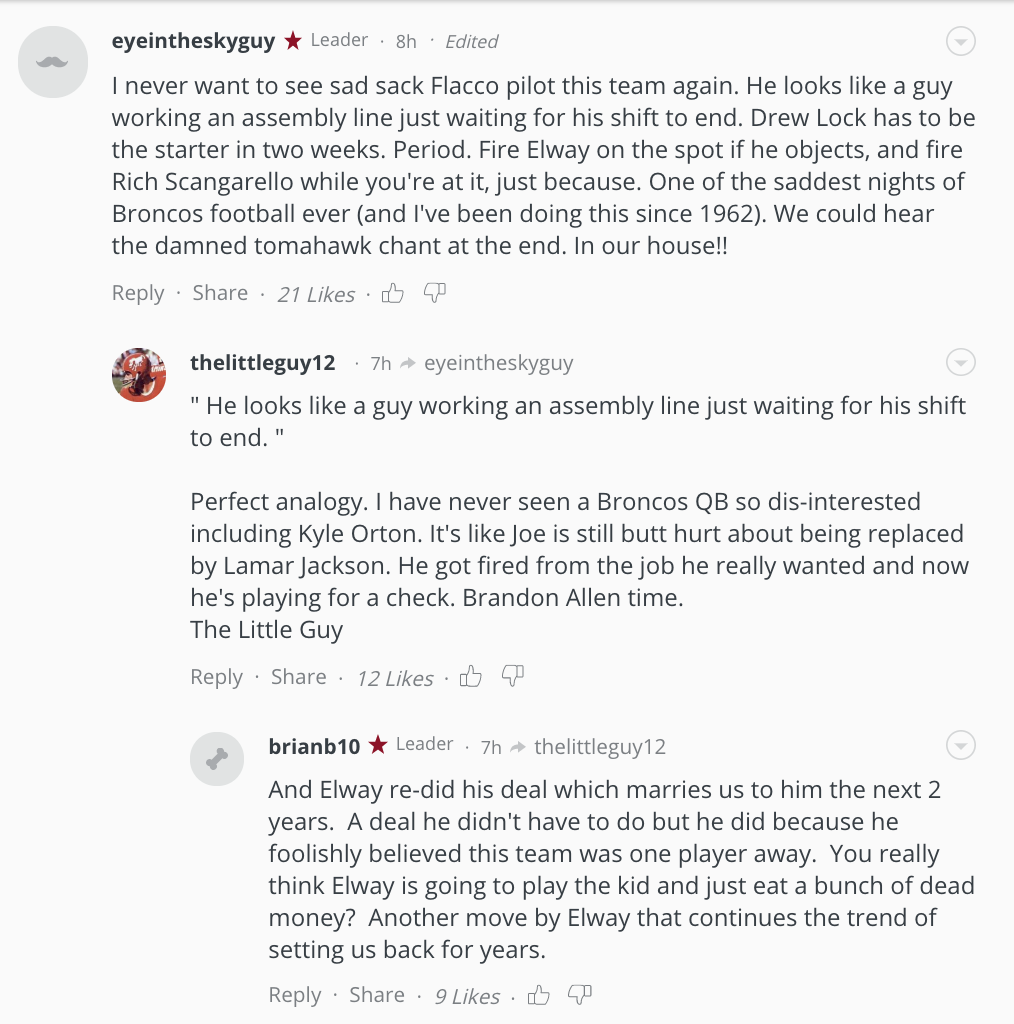 Deadspin chimed in with a piece titled, “Everyone Was Sick of Joe Flacco’s Bullshit”.

In the article, Deadspin does a mashup video of soundbites from Troy Aikman who destroyed Flacco throughout the broadcast. You should click on the link and watch it. But if you choose not to, among the things Aikman opined upon:

At the 0:47 mark of the third quarter with the Broncos trailing 27-6, Aikman tried to contain himself but couldn’t.

“This is where Joe Flacco – he’s got to be a leader. Heck, he’s been around. Super Bowl winner in his 12th year. I don’t want to be too hard on Joe but let’s get a little life out here. There’s still a lot of football to be played. We’ve seen teams overcome more than this. It’s just a few plays and you’re right back in it. In a league that we’re in, heck, you’re almost never out of a ballgame.”

Other Aikman shots at Flacco included:

“This is about as bad an offense as I’ve seen.”

“They’re pretty much saying, ‘Hey, let’s run this clock down and go home.”

A little later in the game, the Broncos sent Flacco back out on the field to the amusement of Aikman.

Aikman saw Flacco was going back out there and started laughing LMAOOOO 😂😂pic.twitter.com/ilcwtZ8peM

Now in Joe’s defense, this wasn’t all on him. Denver’s offensive line is a sieve and it starts with left tackle Garret Bolles who was over-drafted in 2017 with the 20th overall pick. He holds to things like a hopeless hoarder. Plus Noah Fant makes Breshad Perriman seem like sure-handed Michael Thomas, AND the play calling was abysmal.

And perhaps the biggest pile of Denver donkey dung sits beside GM and President of Football Operations, John Elway. He trades for Joe Flacco and puts him behind a garbage offensive line. It’s a recipe for disaster and probably best described by someone in my Twitter feed (sorry I couldn’t find the actual Tweet), “Joe Flacco is a useless statue back there. I’m surprised he’s not covered in pigeon shit.”

Nice job coming from the man who resembles the team mascot.

Had he left the contract alone that was acquired in the trade with the Ravens, Elway could have said goodbye to Flacco without the aforementioned cap consequences.

And I sure am glad that the Ravens knew that it was time for Joe to go.

Question is, where is the next stop for the Flacco fumbles?

Or will he just retire, and maybe sit beside Gerry Sandusky next season in the broadcast booth?