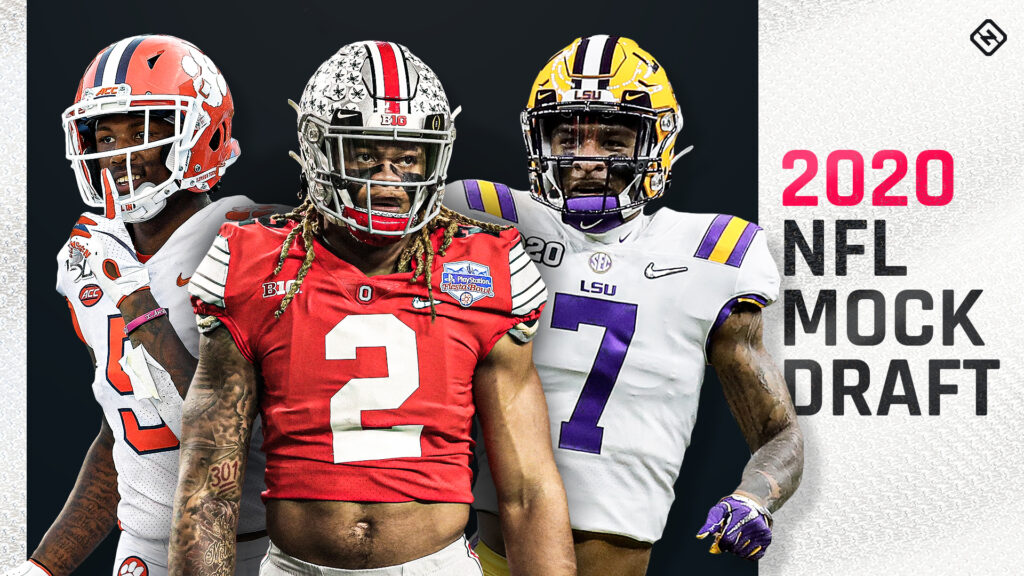 I don’t want to be a buzz kill, but I have some bad news: mock drafts do a terrible job at predicting who the Ravens will draft.

So why do we obsess over them? Well, because they’re fun. Like an Advent calendar, soothing our impatience until the day we get to unwrap the real presents under the tree.

But I wondered, is there anything we can actually learn from mock drafts? To answer that question, I went back to look at the players projected to the Ravens in the first round of the 2019 draft, from about 20 mock drafts I could find on the internet: 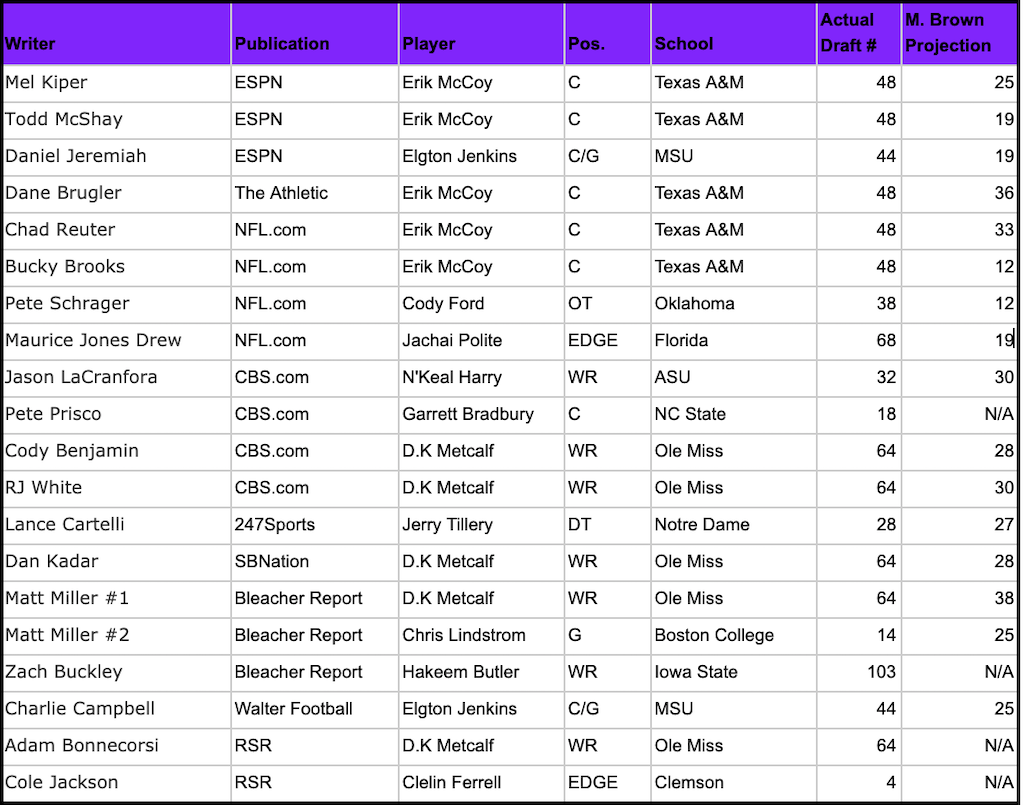 Recall that the Ravens held the 22nd pick, which they ultimately dealt to Philadelphia–accumulating extra picks they would use to select CB Iman Marshal and QB Trace McSorley–before ultimately taking WR Marquise Brown at 25.

Huh. Not a single mock draft I looked at projected Brown to the Ravens. And the players they did project were often selected far afield from pick 22. As the 2019 draft neared, most mockers had become convinced Baltimore would select a center or wide receiver. Many seemed to force-fit a player to the team accordingly.

Where mock drafts go bad, it seems, is when a player is matched to a team based on fulfilling a position of need. In reality, we have all heard the Ravens’ brass preach, best player available, with ‘need’ being a secondary factor in their analysis.

Okay, so is there anything to learn here? I think so. Look at the far right column, above, where the same mockers projected Marquise Brown to be selected. Quite a few very accurately projected Brown at or near pick number 25.

Meaning, when viewed en masse, you can sometimes get a decent consensus opinion on how to rank a player overall. Given the number of people who thought Brown would come off the board somewhere between 19 and 30, in hindsight, it’s surprising no one had him Baltimore-bound.

I don’t think I am alone in believing you can glean this type of information from looking at mock drafts. Ravens general manager Eric DeCosta seems to share this opinion. Look back at how he answered a question posed to him at the 2016 “Liars Luncheon” about the value of mock drafts.

“I look at all that stuff a lot,” he said, “because I like to get a sense of league value, how other teams see players. Mock drafts are sometimes indicative of that.” 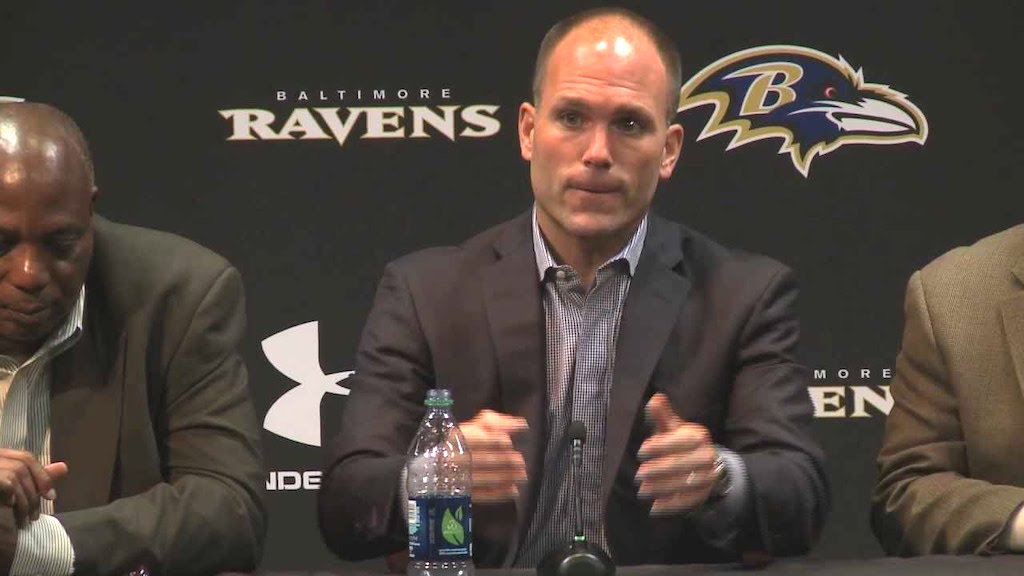 DeCosta went on to describe how he will pore over mock drafts, “just try to get a sense of how other people think about that player. It helps you decide when you really want to take him and what your threshold is to take him.”

So, what is the consensus this year from the mock draft community? Who we might expect to be available near pick #28?

Rather than getting distracted by individual names linked to the Ravens, we should pay attention to the consensus opinion on players widely considered to come off the board at or near pick 28. We should evaluate how well certain players are value-matched to this region of the first round, before we consider how well they are need-matched to the team.

[Related Article: Is a Trade-up Really a 50/50 Proposition?]

If we look at how often a certain player has been mocked to within +/- 5 picks of #28, it starts to reveal who are the contenders and who are the pretenders for being the right value match.

Or, if you are so inclined, it helps reveal who the team might have to trade with, to climb up higher into the first round to get (something DeCosta has said he is reluctant to do), who he can sit and wait for, or who he can trade back out of the round and possibly still get.

With that in mind, I collected nineteen of the most credible, national mock drafts for 2020, looking for the players they project to be selected at picks 23-32. Then I ranked players by the frequency they fall into this range, grouping them into probability groupings, based on consensus opinion of the players who are highly likely to be drafted near pick 28, all the way down to players who are less frequently a match. 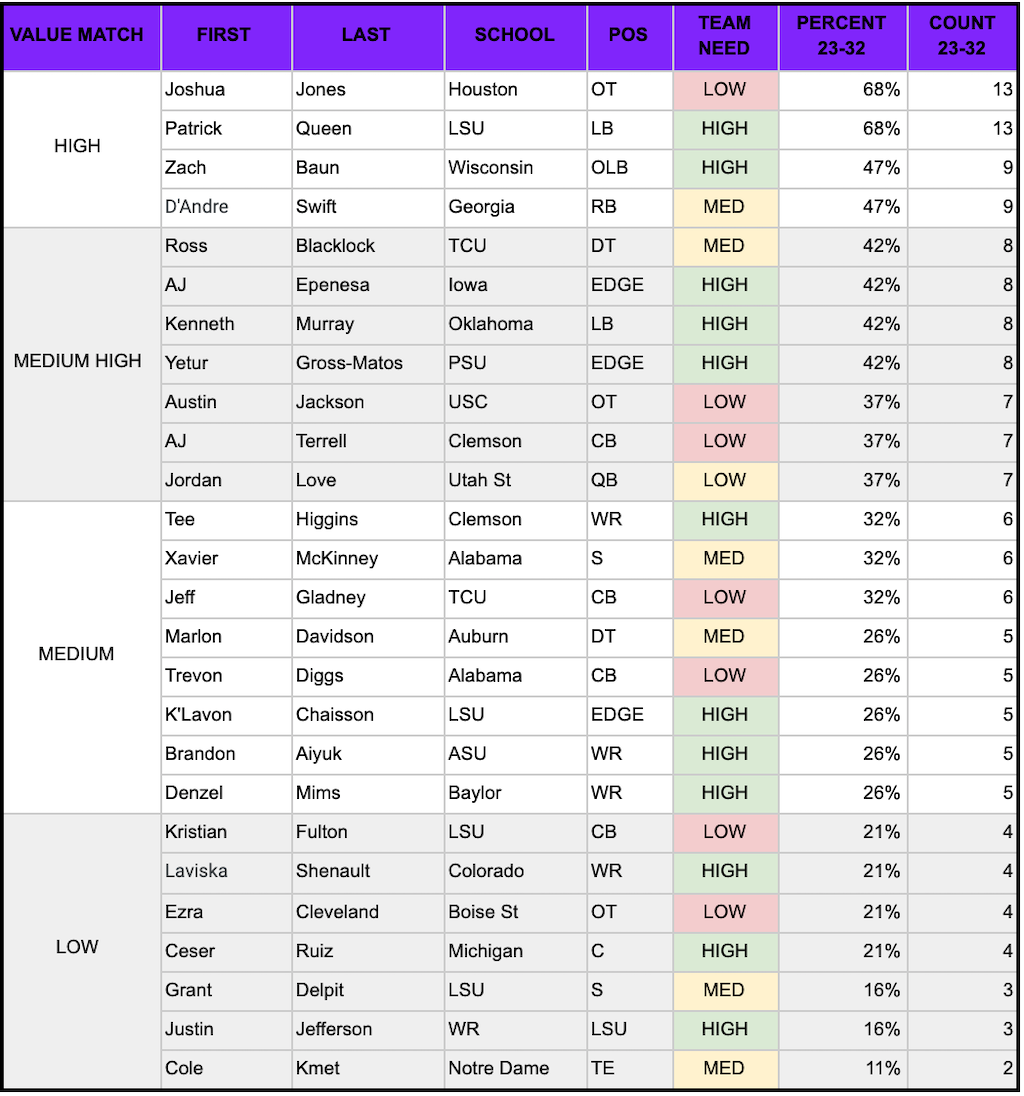 Just to be clear, this is in no way an attempt to rank the players the Ravens should select. It merely suggests who is likely to come off the board near where the Ravens are slated to pick in the first round.

Sixty-eight percent of the mock drafts I looked at, for instance, believe LSU linebacker Patrick Queen will be drafted somewhere within this range of picks. If the Ravens like him, they may be safe to wait for him to fall to them. Only four out of 19 mockers, on the other hand, project Michigan center Cesar Ruiz as being selected in this same range. He might be a player better suited to trade back and take, if they want him.

Hardly scientific, but it starts to reveal how the league views these players, based on the work of writers paid to unearth this information from across the league.

I added my subjective sense for how well each player fits the Ravens’ needs, which is entirely debatable. For instance, I put offensive tackle as a low need. Yet the Ravens have a history of converting college tackles into NFL guards (which is a high need for the team) – e.g., Edwin Mulitalo, Mike Flynn, Kelechi Osemele, Marshal Yanda, Jah Reid.

That said, only Ezra Cleveland on this list fits the mold of a swing tackle, and I don’t anticipate the team using their first round selection on a player they intend to transition. There are tackles who will be available in the middle rounds who are better suited for this strategy.

What this analysis reveals, is that the options likely open to Eric DeCosta when the 28th pick nears.

What it doesn’t tell us is how he and the Ravens staff value these options. We shall see.