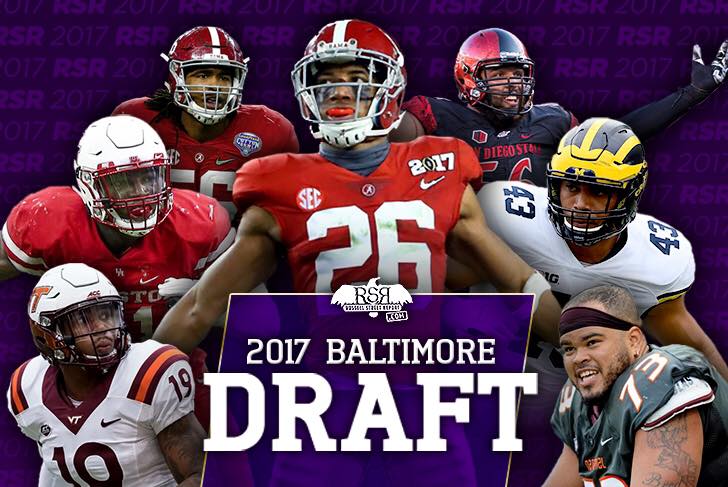 As you are all well aware, the Ravens were (14-2) in 2019. Since they fell to the Titans in the Divisional Round, outside of the loss of Marshal Yanda to retirement, the Ravens have gotten better. And to continue the improvement there’s Ravens Draft Day, 2020.

The Ravens find themselves in a spot where a handful of solid picks should be available at No. 28. Yet they might not love any of those picks enough to stay there. And given the team’s willingness to navigate up and down the draft board, what they eventually do is highly unpredictable. That said, the goal will be to become a better team by Monday April 27 then they were on Thursday, April 23.

And this is where a little draft logic comes into play. This is also where the best player available (“BPA”) approach could fly in the face of team need.

We all know what the Ravens primary needs are: Edge Rusher, Inside Linebacker, Interior Offensive Line and Wide Receiver. Improvement in those areas will go a long way towards lifting the Ravens over their recent one-and-done playoff hump. But what if the BPA doesn’t match up with the Ravens needs?

For example, what if the BPA at No. 28 is D’Andre Swift? Do you take him? Despite the very capable posse consisting of Messrs. Ingram, Edwards and Hill, should the Ravens “Swift-ly” race to the podium with a Georgia Bulldog card in hand? We all are aware of the challenges of selecting a running back on Day 1 of the draft. Typically, a Day 1 pick is a player the Ravens hope will wear purple and black throughout their career. But given the relatively short shelf-life of a running back and the availability of other capable backs later in the draft who could match up well in Greg Roman’s scheme, picking Swift seems like misplaced draft capital.

Take a look around the league. Highly touted, highly drafted backs like Todd Gurley and Leonard Fournette aren’t far removed from the scrap heap. Gurley was a 2015 pick while Fournette became a Jaguar in 2017. And in the case of Gurley, the man got paid – handsomely, and then the Rams bit the bullet and absorbed a big blow to their cap when THIS former Bulldog, failed to perform to the level of his contract.

I’ve heard some fans touting LSU Safety Grant Delpit. Sure, he’s a rangy safety with great athleticism but he has whiffed on 36 of 158 tackling attempts over the last two seasons. That 22.8% whiff percentage might make the Orioles Chris Davis happy, but I can’t see Wink Martindale getting all too excited about Delpit’s tackling inefficiencies. And let’s not forget, in the big leagues, that whiff percentage is likely to get worse. Besides, at least for 2020, the Ravens are well-stocked at the position. Would Delpit make the Ravens, a legit Super Bowl 55 contender, better in 2020?

I’m all in on the Ravens doing all they can to field the league’s best defense. The additions of Calais Campbell and Derek Wolfe will help as will retaining Matt Judon. If Eric DeCosta can figure out a way to dial up even more pressure via the draft or the secondary free agent market, it would really unleash the creativity of Martindale. Plus, it would make a talented secondary even better and pave the way to more turnovers.

And don’t expect DeCosta to forget about defending the run. The Ravens were embarrassed a few times last season trying to stop the Browns, 49ers and Titans on the ground. Choking off the run is a rite of passage for a Ravens defense. It represents a sense of organizational pride. If the Ravens GM can figure out the right combination to harass quarterbacks and frustrate RB’s, their ball control offense that has shown an ability to score from all over the field, could be a lethal combination. Building a great defense is what you do when you have an MVP quarterback who led the NFL’s highest scoring offense when he still has 3 years left on his rookie contract.

What will draft day look like for the NFL’s personnel executives? Here’s an interesting look through the lens of Eric DeCosta.

GM Eric DeCosta checking in with a tour of his Draft room setup: pic.twitter.com/Sqb6GfLY5A

Which of the five players if they are all still available at No. 28, would you want to see Eric DeCosta select tonight?

* I’ve noticed that a couple local sports talkers are practicing revisionist history, claiming that the Ravens considered taking O.J. Howard with the 16th overall pick back in 2017. We all know that pick eventually became Marlon Humphrey. But Howard was never a consideration at 16 for the Ravens. The Alabama alum wasn’t even the Ravens top-rated tight end in the draft. Above Howard on the Ravens board – Evan Engram from Ole Miss.

* Despite the fun banter that they generate, I’m hearing that the mock drafts this season will be even more off the mark than in years past. The medicals are a concern and to a lesser extent, character red flags. And without the ability to vet the players with question marks face-to-face, teams may either roll the dice or play it conservatively. Consequently, in the minds of mockers, the number of busts and steals should spike in this draft. And the phrase of the day, at least during the draft’s first two nights, will be, “That was a reach!”

* Tua Tagovailoa is a big, big risk for a team that really needs a quarterback, particularly for a team drafting in the Top-10. And more than any other player, he represents the biggest rippling effect in Round 1. He’s a great kid and I wish him all the best but I see him tumbling down the draft board in much the same way that Dan Marino, Aaron Rodgers, Warren Sapp and Randy Moss did when questions surrounded them. And let’s not forget Lamar Jackson in 2018. This hip issue is a scary thing and I can’t help but to be reminded of the tragic end to Dennis Pitta’s career. A GM taking a chance on Tua’s hip could put his job in jeopardy, particularly early in Round 1. My prediction? The Dolphins get Tua but not with their first pick or even second pick in Round 1. They’ll turn in the Tagovailoa card with pick No. 26. And here’s a real flyer – it wouldn’t shock me if they took Jordan Love out of Utah State instead, given the success stories named Patrick Mahomes and Lamar Jackson. 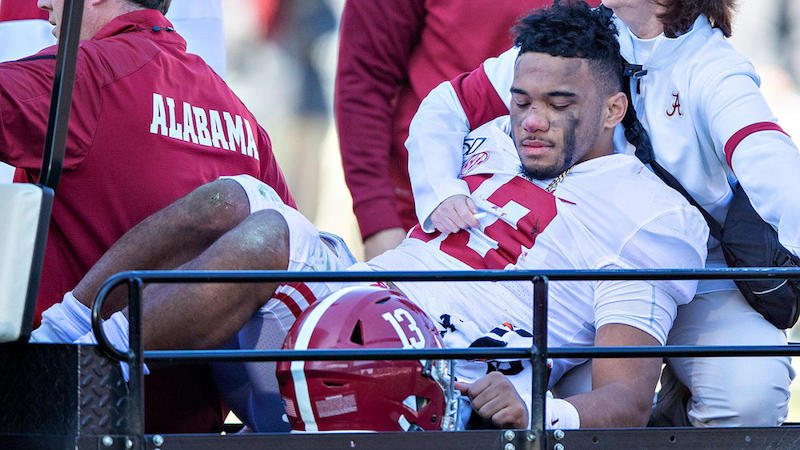 * Eric DeCosta is on record saying that the Ravens have a list of 185 draftable players. In the past that number usually hovers in the 140-160 range. And while it’s generally considered to be a draft that is absent of sure-fire blue chippers, it does have depth as evidenced by the 185 number. You might be wondering why so few, since a typical draft has upwards of 250 players selected. The Ravens know this game. It isn’t science or math but more like art. And in the past the Ravens have never completely exhausted their draft board despite the apparent shortfall.

* Let’s not forget Day 4 of the NFL Draft – Round 8, the land of undrafted free agents. Currently the Ravens have the fewest number of signed players in the league – 57. Should they use all nine of their draft picks it will bring the number to 66. Teams can carry 90 players well into training camp so that leaves plenty of room for UDFA’s. With 185 draftable players this year, no less than 25 more than in previous years, the Ravens personnel department should be extremely busy on Sunday gathering their favorites from “Round 8”.

* If you are wondering about the Ravens 2021 cap picture, early estimates have the league-mandate number at $215M, but during these uncertain times, this could be adjusted downward. At the moment, according to RSR Capologist Brian McFarland, if $215M is the number, the Ravens would have $93M in Cap space, but only 29 players under contract. Add in the incoming rookie class and it would go to $83M with 38 under contract. Extensions for Ronnie Stanley and Matt Judon would likely reduce that number by another $30M more. $53M in cap space is a pretty decent spot to be in, but it’s really all relative to where other teams eventually fall. That said, it’s a good start.

* Have you seen Peyton’s Places on ESPN? It’s recommended viewing for any NFL fan. Peyton Manning is the host and it’s a role he’s nearly as suited for as he is quarterback. I’ve caught the one where he’s squared off with Tom Brady along with another featuring Ray Lewis. Set up your DVD to record them. You won’t be disappointed. 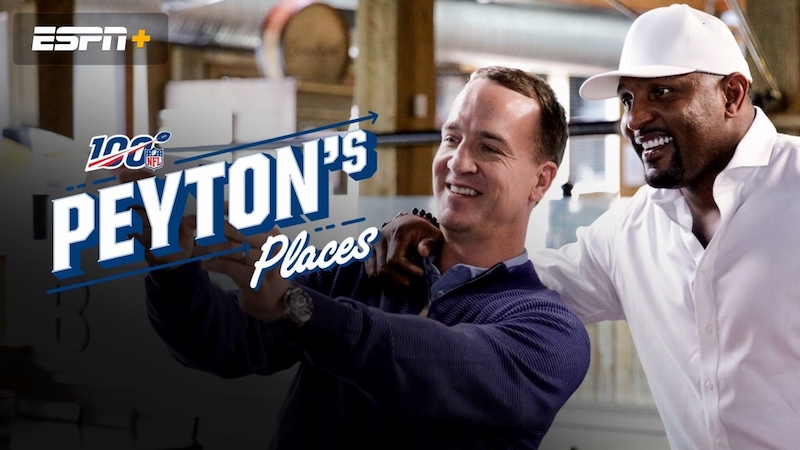 * And lastly, my heartfelt condolences to the family and friends of former Baltimore Colts great, Mike Curtis. Nicknamed the “Mad Dog”, Curtis played the game with anger in the mold of Dick Butkus and later Jack Lambert. He was drafted by the Colts in 1965 as a fullback but was later moved to linebacker where he had a Hall of Fame career – one that Canton, OH has not yet properly recognized. Curtis was a 4-time Pro Bowler (when it actually meant something), a 2-time All Pro, the AFC Defensive Player of the Year in 1970 and a Super Bowl V Champion. Curtis, a native of Rockville, MD, is survived by 3 children and 7 grandchildren. He died from complications of chronic traumatic encephalopathy, commonly known as CTE. The Mad Dog was 77.