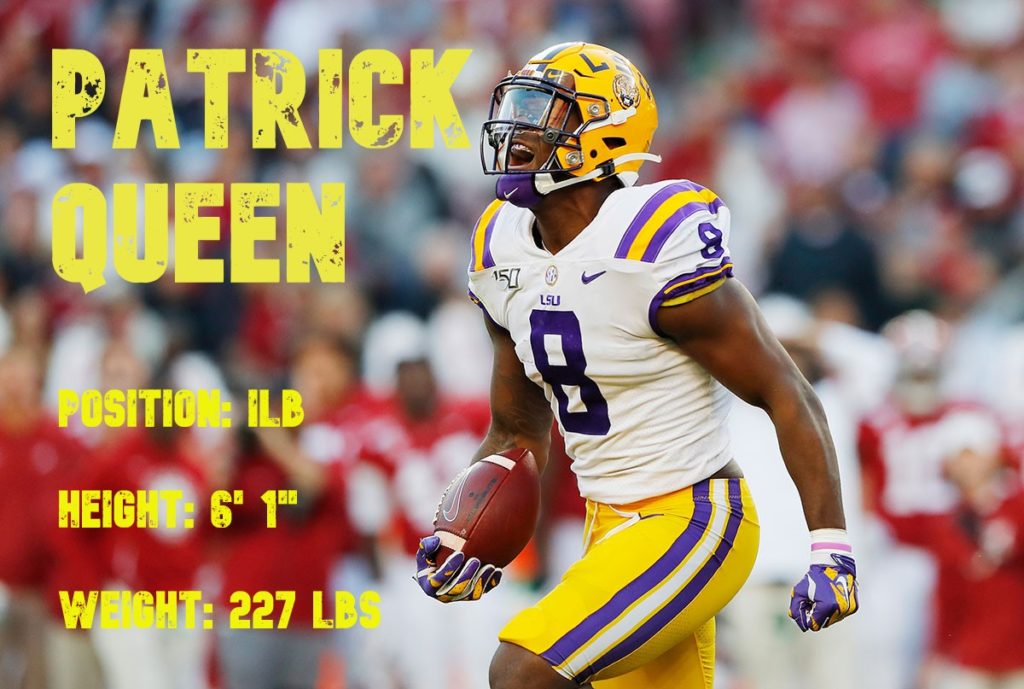 In the first round of the 2020 NFL Draft, the Ravens picked LSU inside Linebacker Patrick Queen. RSR staff react to the pick here…

It isn’t often that need matches up with the highest graded player on the draft board during an NFL Draft, but for the Ravens on Thursday night, that’s exactly what happened with the selection of LB Patrick Queen.

Queen brings uncommon athleticism to the position of ILB and his addition boosts the team’s speed markedly at the second level of defense. Wink Martindale should be excited by the possibilities of a Ravens multi-dimensional defense that just added a versatile player who comes from a background of extremely modest means and is said to be hungry and determined.

There was some talk about trading up and the guess here is that one of the receivers that fell attracted DeCosta & Co. With four picks on Friday, the Ravens are likely to add to their receiving corps and offensive line.

The Ravens drafted a player from LSU which I think is supposed to lift some kind of curse? Does that mean we can use the Flying B again or something? As for the player, I have some minor reservations in the coverage game, but let’s be honest… it’s nitpicking. Queen is a high-ceiling iLB that fills a major need for a Ravens defense that’s otherwise deep and talented.

He’ll be a Week 1 starter and a true impact player for years to come.

With that said… go get me Michael Pittman Jr now!!

Ravens fans should be very excited about this pick. Getting Patrick Queen at 28 and not having to spend precious draft capital to do it is a huge win. I had a feeling when the picks were in the late teens that Queen was likely to make it. Then the Seahawks did us a favor and took Jordyn Brooks. This is the first LSU player taken by the Ravens and I have a good feeling the Ravens will want more after getting a player like Queen.

Kenneth Murray may have won over teams with his interviews but Queen was the better player last year and is on the rise. Now the Ravens will have game-wrecking defensive players on all three levels of the defense. Patrick Queen has big shoes to fill, following Ray Lewis and C.J. Mosley.

I think he’s just the man for the job and very suited for today’s NFL.

Eric DeCosta hit big tonight and I can’t wait to see what he does tomorrow night.

Queen is a solid double with the upside to be more. Fits the current NFL stylistically with his comfort in coverage. Love how he forced himself into the starting lineup and became the leader of an LSU defense loaded with NFL-caliber talents. Nice start to the 2020 draft class.

I comp him to someone like a Deion Jones/Telvin Smith type guy. The Ravens stayed pat and let the value come to them. Adds much needed speed and versatility to an already versatile defense. I am more interested to see what his role will be early on. He is great in coverage and has tremendous instincts, but will Martindale play him early?

— If you’d told me going into tonight that the pick would be Patrick Queen, I would’ve been 100% content, no – happy, with the selection.

— The Ravens have got themselves a fast, sideline-to-sideline linebacker who should fit in very well with the likes of L.J. Fort and Jake Ryan.

— In my opinion, this really makes the defense a dominant unit. All I could see Baltimore truly needing is a young pass rusher, which should come on day two or early on day three.

— Love the pick! Keep chugging along.

— The Ravens were ecstatic to get Queen, especially after Kenneth Murray went off the board to the Chargers at 23. Queen fills a need and was the best player available.

— Entering the draft, Baltimore only had L.J. Fort, Chris Board and Otaro Alaka as the only inside linebackers on the roster. The Ravens also agreed to a deal with Jake Ryan last week, but he has battled knee injuries over the past two seasons. This means Queen will have the opportunity to start right away.

— Queen is a versatile player that will thrive in Don Martindale’s scheme.

Patrick Queen is coming in with 1st round pedigree. The guy is going to play a good bit this year and could develop into a 3-down guy.

I was not overly thrilled with picking ILB at 28, but out of all the ILB prospects, Queen was highest rated after Isaiah Simmons. I am on board with the pick and am excited to see how the team fills out in days 2 & 3 of the draft. We will know based on other picks how EDC and co. view players on the team and the fit of guys like Queen (is he gonna be Mike – my prediction – or is he gonna play Will with a thumper drafted later?)

I’m here for all of it! Let’s go Ravens, and welcome to Baltimore Patrick Queen!