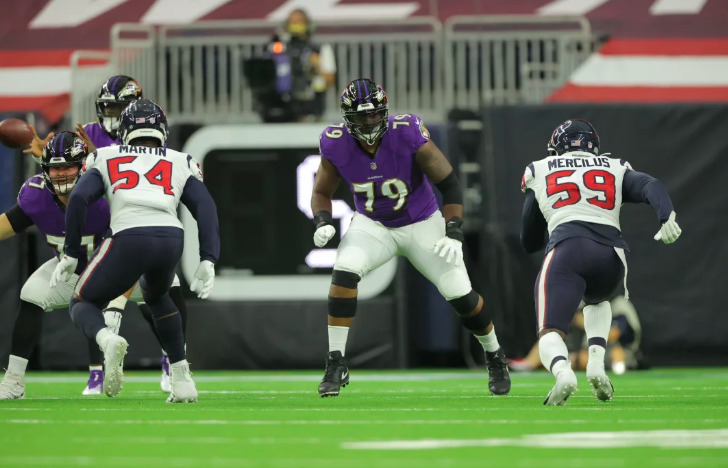 Welcome to a new series at RSR, the Stock Report. Following each game, I’ll take you through players whose stock is rising after a big game, and ones whose are falling after a not so good one.

Although we didn’t get the usually electric Lamar Jackson on Sunday, we got an efficient one. The running game opened up in the second half, Marlon Humphrey and Marcus Peters shut down the passing game, and the pass rush improved from a shaky week one.

Here are the risers and fallers after the week two victory.

Are Marlon Humphrey and Marcus Peters the top cornerback duo in the NFL? I’d say so.

Both Humphrey and Peters forced key turnovers Sunday. Humphrey punched the ball out of the hands of Houston receiver Keke Coutee leading to a loose ball that linebacker L.J. Fort scooped up and ran all the way back for six, and Peters flashed his instincts and ball skills with an incredible diving grab to intercept Deshaun Watson.

Texans receiver Will Fuller V, who had eight catches for 112 yards in the season opener against Kansas City, finished the game with zero targets. Brandin Cooks and Kenny Stills did manage to put together solid days, but this is back-to-back weeks of the opponent’s number one receiver being completely shut down by the best cornerback duo in the league.

The offensive line was much better in the second half than it was in the first half, in both run and pass blocking, and it showed what the unit can do when it reaches its full potential. That being said, the offensive line is the biggest weakness of the Ravens, and it needs to improve if Baltimore plans on contending for a Super Bowl.

The right side of the line struggled to stop J.J. Watt (they aren’t alone), giving up two first half sacks to the former defensive player of the year, on one of which he easily maneuvered past right tackle Orlando Brown Jr. Two plays after Watt’s second sack on what was looking like a nice two-minute drill to close out the first half with some points, they surrendered their third sack of the first half, this time from linebacker Zach Cunningham, who ran untouched in between rookie right guard Tyre Phillips and center Matt Skura, and Sam Koch was called on.

Phillips and the rest of the young interior offensive line will surely get better and grow together as the season goes along and as they navigate the loss of Marshal Yanda.

No matter how much the Texans’ offensive line struggles, bringing down Watson is hard. Ravens pass rushers even missed on a few sacks themselves, as Watson stiff-armed, juked, spun and ran from oncoming defenders with ease.

Finishing with four sacks on a quarterback who is very good at avoiding them is, well, very good.

The Ravens’ pass rush looked slow in Week 1, tallying only two sacks and six quarterback hits against the Browns. The unit bounced back in this matchup by doubling their sack total, adding 13 QB hits, and creating pressure and forcing Watson out of the pocket often.

Fourth-year linebacker Tyus Bowser, who many consider to be in a make-or-break season in the last year of his rookie contract, led the way with three solo tackles including a sack and two quarterback hits while playing in the city where he played his college ball.

Another week, another game where Mark Ingram doesn’t look like the Ravens’ best back.

His day was saved with a 30-yard touchdown run on a fourth and one from a direct snap. Take off that run, and the former Pro-Bowler rushed for just 25 yards on eight carries. That comes after a 10 carry, 29-yard line in week one.

Ingram did haul in a screen pass that he extended from near midfield to inside the red zone, but J.K. Dobbins took most of the third down work the rest of the afternoon.

After Dobbins led the running backs in snap count Week 1, then Ingram just edging out Dobbins and Gus Edwards, who tied for second, in week two, it’s clear Harbaugh is moving forward with the committee approach in his backfield.

Stock Up: The Gus Bus

As Ingram’s stock falls, the other backs on the team stocks’ rise.

Edwards looked like the best ball carrier Sunday, rushing for 73 yards on 10 attempts, which were both tops among the running backs.

As the Ravens put games out of reach by the fourth quarter, Edwards continues to get the bulk of the carries in the final possessions to chew clock, and he keeps making the most of it.

Before the season I projected a steep decline in Edwards’ opportunities, but so far he’s exceeded my predictions, as the snap counts suggest a near even three-way split.

Pat Ricard scored his fourth career touchdown on a goal line reception early in the second quarter. The only teammate of Pat’s who may have been unhappy with the score is tight end Nick Boyle, who almost reached the end zone on the prior play but came up just short, being brought down at the one yard line to set up the play action pass to Ricard. The fullback also set up the Ingram touchdown with a key block on the edge defender.

DeShon Elliott was all over the field as he tallied his first career sack and added four tackles on Sunday. Part of the reason the team was fine with moving on from Earl Thomas was because of Elliott’s potential as a starter. The second year safety has done nothing to suggest they were wrong about him so far.

Coming off a season-ending neck injury suffered last preseason, Young was hoping for a big comeback season to prove he was worth the three-year, $25.8 million contract he signed prior to the aforementioned injury.

This is now the third season-ending injury in Young’s career.

If there’s one thing I know, you can’t question God, Great Win today 💪🏾

Anthony Averett, a fourth round pick back in 2018, was called on to replace the sidelined Young.

He proceeded to give up two costly catches, the first a 13-yard reception to Kenny Stills during the Texans’ two minute drill that led to a field goal to close out the half, and the second a 24-yard pass to Brandin Cooks late in the third quarter on a third and fifteen. He also had a (quite questionable) illegal contact penalty, on the play directly after the Stills catch, that negated a sack that would have killed the drive and instead gave Houston a free first down.

So this is an illegal contact foul on Averett? C'mon man! pic.twitter.com/jQQxuCr42a

With Young done for the season, the team may look to bring in a new face to fill the void with Averett showing he may not be up for the challenge.