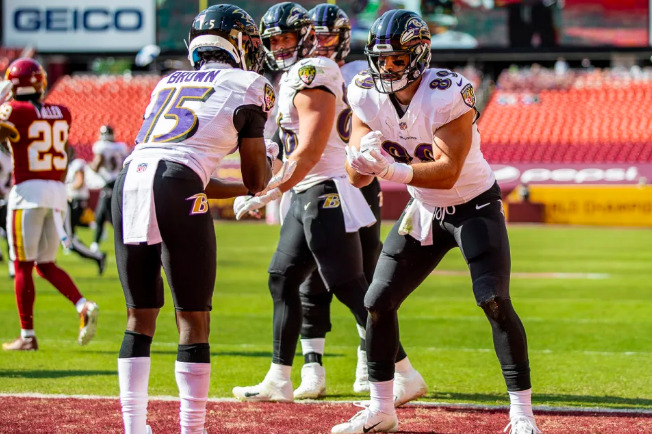 This was an opportunity for a “get right” game, and it couldn’t have come at a better time. Following a 34-20 loss to the Chiefs, the Ravens flipped the script, defeating Washington 31-17.

We saw several players end their personal slumps, Lamar Jackson was more like his usual self, and some key injuries hurt certain position groups.

Here is the stock report after Week 4.

These two were in my “Stock Down” section last week, but it was nice to see the top two pass catchers bounce back from rough starts. Both Mark Andrews and Marquise Brown failed to eclipse 50 receiving yards or catch a touchdown in each of the last two weeks and combined for five drops in last week’s loss. Sunday, Andrews hauled in two touchdowns to go along with 57 yards and Brown added 86 yards of his own.

Jackson’s success is dependent on that of these two, and Andrews and Brown both got their swagger back in a bounce-back game.

This is a common theme you’ll find throughout the risers this week.

Matthew, I’d like to introduce you to Dwayne. Dwayne, this is Matthew. The Ravens pass rusher and Washington quarterback got to know each other quite well on Sunday, as Judon collected two sacks, after having none through the first three weeks, to go along with five QB hits.

Again, another nice bounce-back game from a player in a contract year who had, for the most part, disappeared to start the season.

Patrick Queen increased his tackle totals from three last week to 12, including a nice goal line stop where he dove over the line to stop Washington running back Peyton Barber from doing the same. Three of his 12 tackles were for loss, which tied C.J. Mosley for the franchise record for tackles for loss by a rookie linebacker. He also came back and finished the game after a scary looking leg injury in a collision with teammate DeShon Elliot. This quality performance comes after being benched for stretches during the second half of the Week 3 loss.

Back in action Sunday at 1 p.m. on CBS vs. the Bengals pic.twitter.com/tQh5Gdp4D5

With left tackle Ronnie Stanley out, Bradley Bozeman looked like the Ravens best offensive lineman in Sunday’s win. He has consistently ranked among the league’s best pulling guards, and that ability was on full display as a lead blocker for Jackson’s touchdown run.

Tune in on CBS! pic.twitter.com/l63ZQs9Q2T

To compensate for the absence of Ronnie Stanley, who was inactive due to a shoulder injury, the Ravens did some reshuffling to the offensive line. Orlando Brown Jr. was moved from right to left tackle, where he played at Oklahoma, and D.J. Fluker got the start at right tackle, something he hasn’t done in six years going back to his days with the Chargers.

The unit played as you would expect with two players out of position. Jackson dealt with pressure all game long even though Washington often only rushed four, and, if you take away Jackson’s 50-yard touchdown, runs averaged just 3.3 yards per attempt. Furthermore, Brown had another false start penalty, and Fluker was called for holding twice.

It’s never easy in-season, but the team may need to look to add depth at OT in the coming weeks to prevent guys being forced to play out of position in the event of another injury.

Similar to the Stanley-less offensive line, the Derek Wolfe-less run defense was also concerning, as the team missed Wolfe more than I expected. No defensive lineman had a tackle for loss. Lead Washington running back Antonio Gibson didn’t have a fantastic game in the box score, but had multiple runs that gained five to ten yards and was rarely ever brought down in the backfield.

Although Marquise Brown had a solid game, it could have been a great one had his quarterback given him more catchable balls. This is the second straight week where Brown had a few steps on his defender and Jackson either overthrew or underthrew him. We heard all about Brown’s weight gain and healthy foot and Jackson’s improved deep ball over the offseason, but so far we have yet to see either of these improvements equate to success or a better connection between the QB and his number one wide receiver.