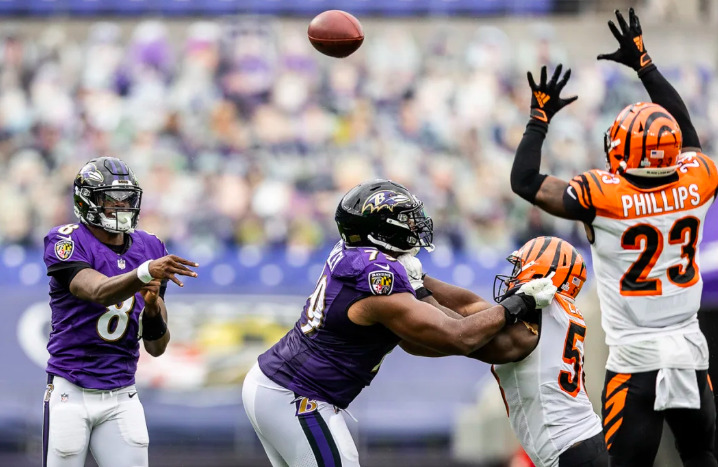 The Ravens dominated the Bengals in Week 5 and improved to 4-1 on the year.

So, why are there critical questions surrounding this team?

The concerns lie on the other side of the ball.

Quarterback Lamar Jackson, who missed two days of practice, appeared out of sync once again. He completed 19 of 37 pass attempts for 180 yards with a pair of touchdowns, but was sacked once and threw an interception for the second straight week (71.9 rating). He averaged 4.9 yards per pass attempt. Jackson had just two carries for three yards.

Coach John Harbaugh was in no mood to discuss the challenges of the offense following the 27-3 victory over Cincinnati.

When asked whether Jackson’s knee injury changed the gameplan, Harbaugh replied: “No.”

The Ravens were looking to open the passing game and make more plays downfield this season. Instead, they’ve regressed in that area.

After setting the single-season rushing record last season, the Ravens’ running attack has still been effective. Baltimore is ranked third in the NFL with 160.8 yards per game.

The Ravens, however, seem to get away from trying to wear teams down this year.

“I don’t know about schematically; I was just going out there and playing fast and doing what I can,” tight end Mark Andrews said. “I know, it was good to see … I know in the first half, we were kind of flying around, doing our jobs, and I was happy with what we did. And we have a lot to get better at. [We’ll] look at the film, get better and be a better offense. I know our defense balled-the-heck-out, man.”

Jackson agreed there is something missing from the offense.

“I feel the same way. We need to get back to how we were last year,” he said. “We go out there, and we perform at a high level like we do. I’ll say we’re fine though. We’ll get to practice, and we’re going to regroup and watch film, and we’re going to get right.”

Numerous teams would love to trade places with the Ravens. When a team enters the season as one of the Super Bowl favorites, the coaches and players are going to have to deal with the scrutiny.

The Ravens are half a game behind the Steelers in the AFC North, and those teams play each other twice in November, which could decide the division. Baltimore has plenty of time to fix some of the problems on offense, but the questions will linger until the players begin pulling in the same direction.

The players have certainly not lost any confidence in Jackson’s ability to lead the team to its march to the postseason.

“I know Lamar is a professional,” Andrews said. “He’s a guy who’s going to get in his playbook [and] do his thing. So, all of us just have to go out there and play our game – do our jobs to the best of our ability. And I don’t think that has anything to do with it. He’s the MVP. That’s the guy. That’s our guy.”