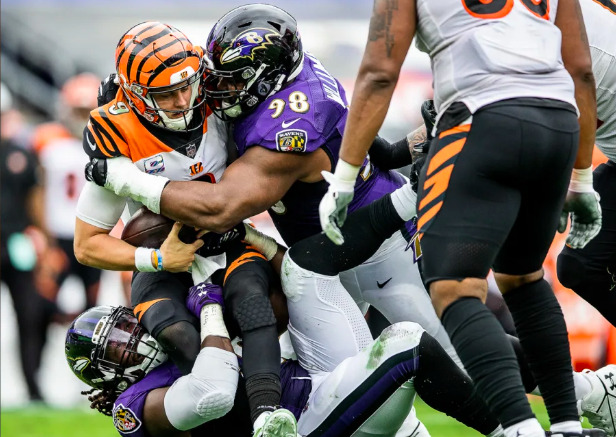 Another week, another win that leaves Ravens fans feeling a bit uneasy. Maybe we’re a bit spoiled after a 14-2 season spearheaded by an MVP quarterback and a record-setting rushing attack.

Even without that same QB playing like the MVP he was just a season ago and that same rushing attack looking not so “record-setting,” the Ravens have more wins this year than last year at the same point in the season and have done so by an average margin of 22 points.

Yeah, we probably are a bit spoiled.

Here’s whose stock is rising and whose is falling after the 27-3 Week 5 win over the Bengals.

Maybe I’m cheating a little bit putting the entire defense on here, but I don’t care. This was easily one of the best performances I have ever seen from a defense, and it was the story of this game.

Every member of the starting secondary had a sack. Marlon Humphrey, who has to be in the Defensive Player of the Year conversation, forced another fumble. Patrick Queen forced a fumble on a sack of his former LSU teammate Joe Burrow, recovered it himself, and returned the Humphrey punch out to the end zone. Marcus Peters added another interception, Jaylon Ferguson had a career high six tackles, Pernell McPhee had four QB hits, and rookie Justin Madubuike made his presence known with a QB hit of his own in his debut.

In total, Don Martindale’s defense allowed just 3.2 yards per play, 2.5 yards per rush, forced three turnovers, registered 15 QB hits, seven sacks, and allowed just one trip inside the 20 from the Cincinnati offense, where they settled for a field goal on their last possession of the game. They also extended their  takeaway streak to 18 games.

This was a dominant performance from one of the league’s top defenses, and it came when the other side of the ball again struggled to get into any sort of rhythm.

I’ve been high on Patrick Mekari since he was first asked to fill in for an injured Matt Skura last season, and I’m glad he’s getting another shot this year. It was unfortunate there wasn’t a spot for him on the starting offensive line to open the season, even after right guard Marshal Yanda retired. Rookie Tyre Phillips has been the Yanda replacement so far but has been up and down in the role through four weeks. With Philips out Sunday, John Harbaugh said offensive line coach Joe D’Alessandris had the idea of rotating Mekari and Ben Powers at right guard every two drives. Lamar Jackson had plenty of time in the pocket when it was Mekari’s turn on the field and he did a good job of opening up holes and bullying defenders in the run game.

Mekari proved he can play somewhere other than center, the position he played when he was PFF’s second-highest graded rookie offensive lineman a season ago, and I’m interested to see if he did enough in the coaches’ eyes to earn the starting right guard spot moving forward, or at least an expanded role.

Somehow, Greg Roman has managed to turn an offense that was must-see TV a year ago into an unwatchable one.

By far the most frustrating part of this season has been Roman’s inability to stick with what works: running the ball. On Sunday, he seemed disinterested in establishing the run and even less interested in sticking with it, even against one of the league’s worst defenses in that department.

There is no reason at all Jackson should be throwing nearly 40 times in a game where the Ravens never trailed, were up by three scores by the second quarter and, again, faced one of the league’s worst run defenses.

It’s almost as if Roman is doing everything he can to squash the narrative that you need to force the Ravens to throw to beat them and also trying to prove to the league that Jackson is Mahomes, Rodgers, or Wilson, and sabotaging a once unstoppable offense as a result.

Sunday is in serious contention for Lamar’s worst game as a Raven.

Jackson did toss two touchdowns, but that’s where the good ends and the bad begins. He had just one interception in the box score, but if you were watching you saw that one could have easily become three or four (Tony Lombardi breaks them down here). He looked out of sync with the offense in the passing game, highlighted with an incompletion to Miles Boykin where Boykin turned around and looked like he didn’t even know what the play was. Jackson ran just twice (and his longest of the day was called back on a holding penalty), but I’ll chalk some of that up to the missed practice.

What concerns me is what Bengals safety Jessie Bates said postgame.

Through four weeks, Andrews and Brown have been targeted on 47% of Jackson’s passes, and wide receivers and tight ends not named Andrews or Brown were thrown to on just nine of Jackson’s 37 throws on Sunday.

Jackson has to be better at spreading the ball around. Some of this may be on Roman’s inability to successfully get other pass-catching options consistently involved. Some would argue the Ravens need to acquire another pass catcher via trade.

Personally, I think that guy is already on the team: Devin Duvernay. There was one instance in particular on the Ravens’ first offensive drive where Duvernay and Andrews both ran crossing routes from the right to the left side of the field. A pass to an open Duvernay would have likely resulted in an easy first down with room to run. Instead, Jackson forced a throw to a farther downfield and more tightly covered Andrews, and an incompletion led to a field goal.

The funny thing about what Bates said is that they knew he would target mainly Andrews and Brown, yet they had a combined 12 catches for 133 yards and two touchdowns. A bad defense will know what they need to do and fail to stop 89 and 15, but if a good defense comes in with the same knowledge, it’s likely Andrews and Brown will be shut down.

What will the Ravens do then?