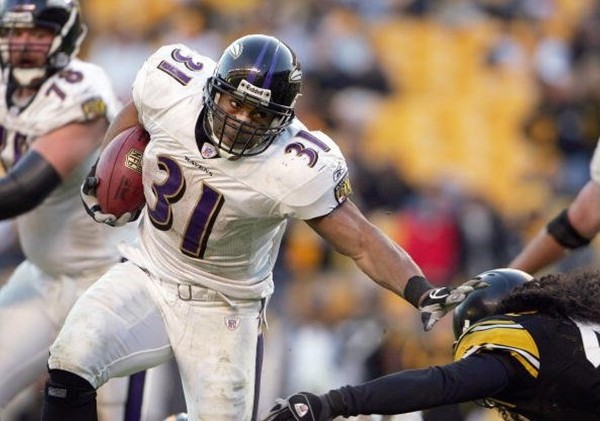 Derrick Henry’s 2020 season was quite impressive. Despite being the primary target of opposing defensive coordinators week in and week out, Henry still managed to rack up 2,027 yards on 378 carries. But as impressive as Henry’s 2020 campaign was, it pales in comparison to Jamal Lewis’ 2003 Ravens record-setting season.

Back then, Lewis flirted with Eric Dickerson’s all-time mark of 2,105 yards but Jamal could only manage 114 yards on 27 carries against a rugged Steelers defense that was determined NOT to let Jamal break Dickerson’s mark on their watch. Consequently, Lewis fell 40 yards short of re-writing history. Jamal finished with 2,066 yards on 387 carries.

On the surface, these two bell-cows produced numbers that are very similar. Henry averaged 5.36 YPC while Jamal averaged 5.34. But what makes Jamal’s 2003 season more impressive is that other than Todd Heap who had 57 catches for 693 yards, the Ravens had little firepower on offense. Heap’s TE sidekick Terry Jones added 19 catches for 159 yards to bring the tight end totals to 76 catches and 852 yards.

The Ravens leading receivers that season were Travis Taylor and Marcus Robinson with 39 and 31 catches, respectively, producing 1,083 receiving yards. And at quarterback, the Ravens used Kyle Boller, Anthony Wright and Chris Redman who combined for 16 TD’s and 19 interceptions to go with a combined passer rating of 64.7.

Conversely the Titans top two tight ends, Jonnu Smith and Anthony Firkser have put up 80 catches for 835 yards while their two top receivers, A.J. Brown and Corey Davis, racked up 135 catches and 2,059 yards. Titans’ QB Ryan Tannehill has thrown 33 touchdowns against 7 picks for a 106.5 passer rating.

Clearly Henry has been supported by a much more productive collection of offensive talent than Lewis. And let’s not forget that back in 2003, defenses were built to stop the run – certainly much more so than they are today.

Taking nothing away from Derrick Henry, but Jamal Lewis’ 2,000 yard season, comparatively speaking, was more impressive…and it’s not even close.