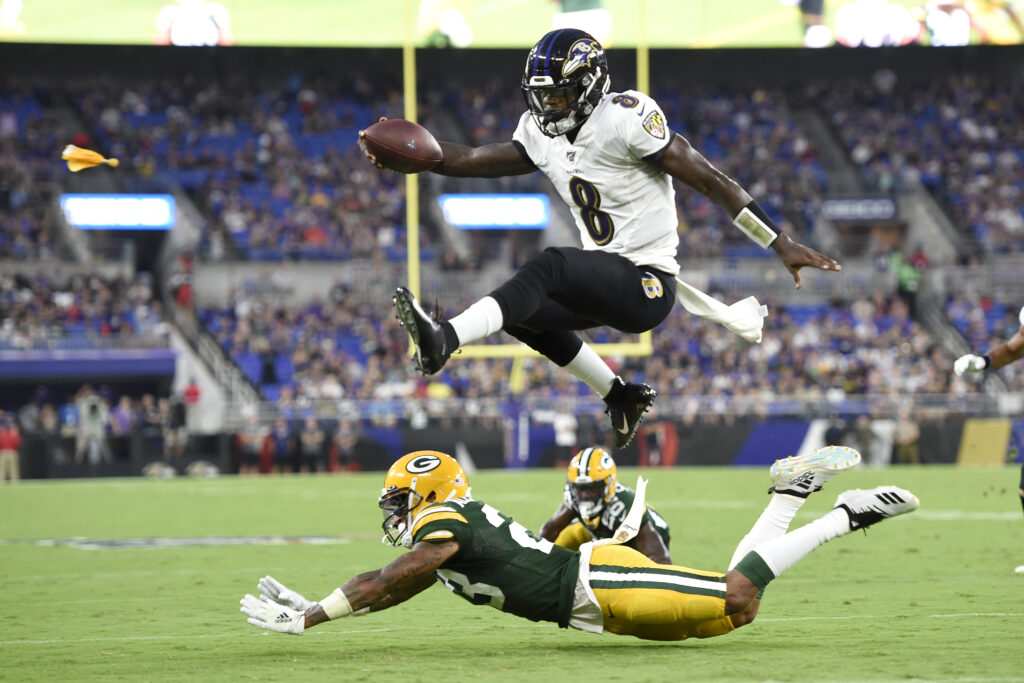 The Dog Days of August

To get down to the mandated roster limit of 80, the Ravens parted ways once again with Kenji Bahar, the former Calvert Hall College quarterback. Some have taken the move as an indication that Lamar Jackson will take his first live snaps of the 2021 preseason during the Ravens third and final regular season warmup down at the mistake off I-95, aka, Fedex Field.

With Trace McSorley unavailable due to a back injury and the release of Bahar, the Ravens are down to two signal callers and via deductive reasoning, many have concluded that Lamar will see time on Saturday night. But what would the Ravens gain by sending Lamar onto the field? Would a series or two against the Washington Football Team reserves be any more valuable than the reps he took in Spartanburg, SC against the Panthers?

Just because there are only two QB’s available on the roster, doesn’t mean that two will play on Saturday. After all, didn’t Tyler Huntley take just about every snap last Saturday against the Panthers in Charlotte? Why shouldn’t he do it again?

The injury to LJ Fort was significant as was the loss of his services for the 2021 campaign. Fort is a smart, crafty veteran, with solid fundamentals and a fairly diverse skill set. He lacks explosiveness but does possess the ability to fill in for Patrick Queen or Malik Harrison without any precipitous drop off. Without LJ, the Ravens are down to four inside linebackers.

Outwardly, the Ravens are showing no sign of panic and the popular opinion is that they will fill in the weakened depth with a veteran player who is currently a free agent or someone who might fall off another roster when teams trim down to 53 by August 31. K.J. Wright has been mentioned as a possible replacement. But that seems more like a fantasy football approach than a practical one.

Wright has earned close to $46M during his 10-year career as a Seahawk. He’s been on playoff teams, was named to the 2016 Pro Bowl and earned a ring in Super Bowl 48. Plus he has started in 140 of the 144 regular season games in which he’s played. Wright doesn’t sound like a match for the Ravens.

I expect that the Ravens will make a move on a reserve who is willing to accept such a role and able to contribute on special teams. You know, sort of like the move the Ravens made to land LJ Fort back on September 30, 2019.

Hey, are you aware that Patrick Onwuasor is now a free agent? 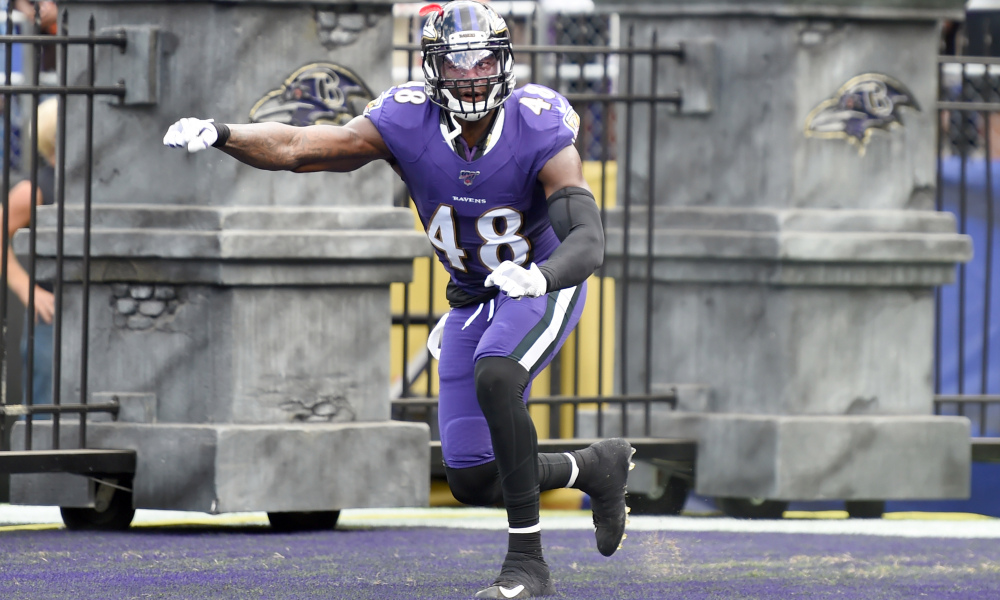 Jordan Richards was let go recently to help the Ravens get down to the mandated 80-man roster by 4PM on August 24 (yesterday). Some fret the loss of a special teams contributor, particularly when considering players on the bubble who have also contributed to “teams” and might not make the cut. Such players include Anthony Levine, Sr. and Justice Hill.

But for those who worry about such losses on “teams”, keep in mind that the players replacing them will generally be younger athletes looking to establish themselves – to show up on film with the hope that it earns them a position on offense or defense. Keep in mind that they have the ability to fill in and to be productive contributors. Keep in mind that by virtue of rules to protect players the league has diminished the value of special teams. And also keep this in mind:

• The Ravens have an accomplished kick returner in Devin Duvernay
• They have a reliable punt returner in James Proche
• Justin Tucker if need be, can kick the ball through the end zone at will
• Only 17 of Sam Koch’s 51 punts in 2020 were actually returned

Keep the best players and then worry about how the best available from the 53 will round out the special teams units. While an important part of the game, it’s not as if special teams is rocket science.

The Ravens have a stable of leaders on the team who set an example through their excellence and dedication to their craft. Brandon Williams, Jimmy Smith, Marlon Humphrey and Pernell McPhee are all among those who fit this description. Add newcomer Justin Houston to the mix.

It’s a bit of a challenge for a player who has been with a team for less than a month to assume a leadership position. But when you possess the veteran moxie of Houston, coupled with his resume, rookies tend to listen. Let’s call it the E.F. Hutton effect.

Yesterday after practice, Houston host a tutorial session with rookie edge defenders Odafe Oweh and Daelin Hayes. The 4-time Pro Bowler guided his pair of proteges through a few drills to help them develop a repertoire of pass rush moves. These are the qualities that the Ravens acquired with the Houston signing. These are the qualities of a man that wants his team to win and is willing to go the extra mile for the player beside him – players who could steal away his job in the not-too-distant future. THAT defines teamwork.

Let’s hope that Sammy Watkins, Ronnie Stanley, Alejandro Villanueva and Lamar can provide the same for the offense.

If there’s a weakness on the Ravens roster it has to be depth at offensive tackle. THAT, more so than reserve ILB, remains the No. 1 priority for GM Eric DeCosta. Maybe Michael Schofield is that guy, but through my lens, I think he lacks the necessary athleticism. He’s not particularly quick or powerful. But one player who could eventually develop into a serviceable swing tackle is UDFA Adrian Ealy.

Here’s the scouting report on Ealy as described by NFL.com’s Lance Zierlein:

Two-year starter at right tackle with quality size and length but a concerning lack of functional bend and change of direction. While Ealy has clearly made strides as a player while at Oklahoma, too often he’s forced into maul mode in order to scramble and engage. He has very average range as a run blocker and a low hit rate when climbing up to the second level. If he can fix his hands and utilize length more consistently in pass protection, he’ll have a shot as his pass slides looked smooth and quick at the Senior Bowl. If he’s unable to get enough bend to anchor more consistently against the bull rush, then he won’t be around for long as an NFL tackle.

Word is that Ealy is a very coachable kid and he’ll benefit from one of the best in the business with Joe D’Alessandris. It could be a bit tricky to get Ealy through waivers and onto the practice squad. He’ll need the developmental time.

RSR contributor Mike Crawford put this video together of the snaps that Ealy took against the Panthers. It’s pretty impressive but I’ll qualify the outing with this…it took place during the fourth quarter of a one-sided game against a tired and worn down collection of Panthers’ reserves. But that said, one can only play against those who line up on the other side of the ball.

Jake, Not From State Farm

One player that Ravens fans should really be rooting for is PK Jake Verity. Verity has demonstrated a powerful leg throughout camp and during preseason games. If DeCosta is holding out hope that he can land another 5th-round pick for a kicker the team eventually plans to cut, now is the time to showcase those talents. Justin Tucker shouldn’t even dress on Saturday. Here’s to Justin staying home and kicking it around with the kids in Patterson Park instead.

He has flashed at times before. We’ve seen the athleticism at work on the practice field only to be left disappointed in the past by an unfortunate and untimely injury. But last season, DeShon Elliott played a full season and in 2021 he’s looking to follow up a solid campaign with a career year, not only to help his team but also to establish his market value as a free agent in 2022.

A lot can happen between now and then and while it would appear that the Ravens will allow Elliott to graduate given the talent that waits in the wings, it’s not too difficult to envision the former Texas Longhorn flourishing in a defense that matches up nicely with his skillset.

.@Ravens @OfficialShon_4 made 3 great plays in this game v @Panthers . So much sound fundamentals that allow Elliott to win these 3 downs. Watch & learn. #BaldysBreakdowns pic.twitter.com/SiwORTkADU

After watching this clip for the first time I couldn’t help but notice the optical illusion in the video when Elliott stands beside Panthers tackle Aaron Monteiro. Ravens.com’s Ryan Mink noticed as well…

What makes DeShon’s plays even more incredible is the Panthers’ size advantage! ???????? pic.twitter.com/YdiBTLXHhM

And lastly on Elliott, I’ve always maintained that players know players best. They don’t get caught up in draft status, pay grades, etc. They just seem to know who is inherently good. Former teammate Matt Judon gives Elliott his proper due:

The long life of the Ravens’ 2019 trade of Jermaine Eluemunor and a sixth-round pick:
— Patriots sent back a 2020 fourth-round pick
— Ravens later packaged the pick with a 2020 second-round pick to acquire New England’s Nos. 71 (Justin Madubuike) and 98 (Malik Harrison) picks. https://t.co/ouEXdNNHYC

Lamar Jackson has taken his fair share of shots from the media. Some are earned but most are wildly exaggerated claims with shaky foundations, some even bordering on stupidity, like this one from former Packers OLB Brady Poppinga…

Translated: “I think you may have received too many blows to the head”.