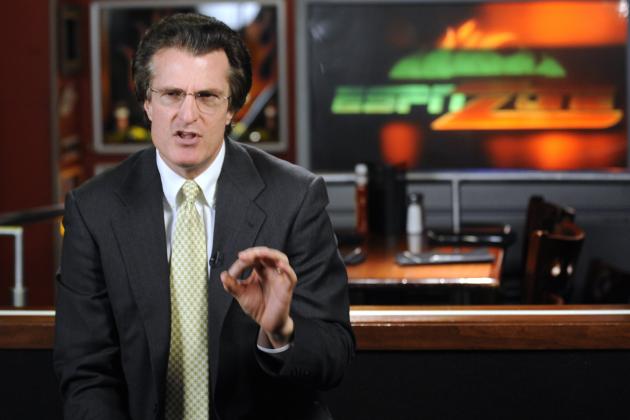 The Ravens have the potential of building the NFL’s next dynasty.

At least that’s the contention of Mel Kiper Jr.

The ESPN draft expert spoke with Ravens’ representatives at the 2020 NFL Scouting Combine.

Kiper is confident GM Eric DeCosta is putting the pieces in place to build a long-term contender and has the support of ownership to stay on top.

“In the next five years, you expect the Ravens to be in multiple Super Bowls,” Kiper told the team’s website. “That’s what you’re hoping. I thought the Cleveland Browns could have been that team. They couldn’t get it done.

“So, you don’t want to get too crazy with this. [The Ravens] organization, Steve Bisciotti is a great owner, phenomenal owner. Then, you have Ozzie, Eric and the scouting department. Everything they have there is so well-fortified in terms of people who love the game and are passionate about the game.”

Kiper expects the Ravens to be dominant again on offense with league MVP Lamar Jackson behind center. The Ravens have a talented group of players back in the fold, including one of the most dominant tight end trios in the NFL.

“I’m not going to say the offensive line is less important, but it’s not as critical with Lamar being so mobile and doing the things they do with Greg Roman,” Kiper said. “The tight end has been fortified. We know how strong they are at that position.”

The final piece of the puzzle could be adding a talented linebacker, according to Kiper.

C.J. Mosley was the last linebacker the Ravens selected in the first round (17th overall from Alabama in 2014). Mosley made the Pro Bowl in four of his five years with the Ravens.

“The defense is where you have the issues and kind of need to fix,” Kiper said. “Linebacker, maybe inside like Patrick Queen. I love him out of LSU. He was the most improved player LSU had.”

Queen was ranked third on the Tigers with 77 tackles, 9.5 tackles for loss and 2.5 sacks over 14 games last season. He also came up huge in the national championship game against Clemson.

Another LSU player perhaps on the Ravens radar is outside linebacker K’Lavon Chaisson. Chaisson, 6-foot-4, 250-pounds, is the third-rated linebacker in this year’s draft on several boards.

If the Ravens do select Queen or Chaisson, it will be the first time in franchise history the team drafted a player from LSU in any round.

The player most closely linked to the Ravens is Oklahoma linebacker Kenneth Murray, who is the highest-rated linebacker on some draft boards. Murray tied for eleventh in school history in total tackles (335) and tied for eighth among linebackers for sacks (9.5) over his 42 career games in Norman, Ok.

The Ravens also traditionally like players from Oklahoma. Baltimore has taken 11 Sooners in its draft history, which is tied with Alabama for the most players taken from one school.

Another intriguing option is Boise State linebacker Curtis Weaver, who had 13.5 sacks last season. Weaver has the physical presence to make an immediate impact with the Ravens’ high-pressure defense.

The Ravens traditionally don’t draft for need, but they do need upgrades at linebacker. DeCosta would likely pounce if any of these players are available with the 28th overall pick. He might even be tempted to move up to grab a play-making linebacker, considering the impact that position will have with the future of the franchise.